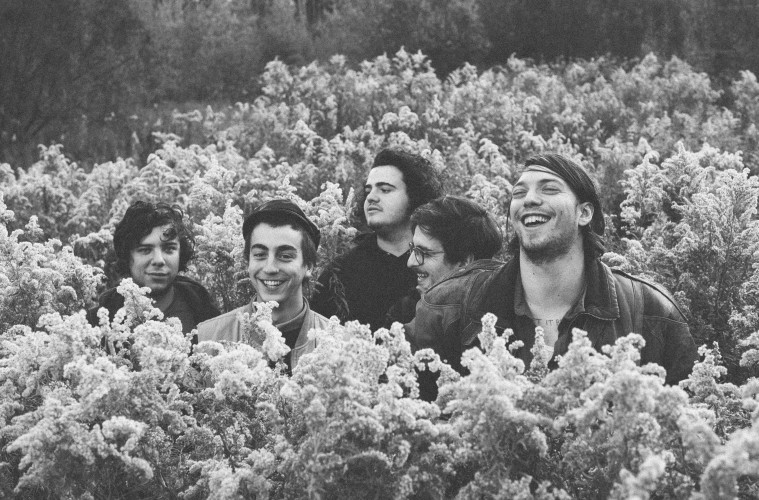 Twin Peaks: “Say yes to everything”

As I sit down opposite part of Chicago garage rock outfit Twin Peaks, one thing instantly strikes me: these guys are busy, and they’re absolutely loving it. Having recently released third studio album Down in Heaven, the Cadien Lake James-fronted quintet have done nothing less but churn out sickly sweet garage rock and tour relentlessly to a point where the line between each separate tour has become increasingly blurred. I saw this as an opportunity to ask keyboardist Colin Croom, bassist Jack Dolan and drummer Connor Brodner some questions on a chilly (but sunny) Amsterdam afternoon.

So how’s Amsterdam guys?
Colin: Fucking great, man. Every time we come here we stay at the Backstage Hotel, which is just a weird but awesome place.

Yeah?
Colin: Yeah! Like, all the rooms have flight cases and amp cases for furniture, and if you look up at the lights there’ a snare drum as light fixtures. In America we have these things called Guitar Centre’s, which is like the big chain for purchasing musical equipment. The Backstage Hotel is like Guitar Centre, but in suite form. It’s cool, though.

Your new album Down in Heaven came out last year. How did it come about, recording-wise?
Colin: Umm. We recorded the record last year over parts of the summer at our friends’ house in Western Massachusetts. It’s in between New York and Boston, so when we’d travel on tour we’d just stop there at this beautiful, New England style house. It was built in the eighteenth or nineteenth century, and it’s got gorgeous land. Our friend said that we could record it there as long as we brought our own gear with us. We purchased some recording equipment and prepared. It took about a month altogether to record, and it was really nice to do it there. We mixed it with John Yellow in New York.

Andrew Humphrey co-produced the record. What did he bring to the table from a producer’s perspective?
Colin: Well, I and he worked together as a production team for a long time and we also did some engineering. For this record, he brought a lot of production elements to it but also a good eye and understanding of the gear we were using to record. If something was going wrong, he would troubleshoot it and help make some aesthetic choices. It really helped. What about the record’s lyrical and musical influences? Anything in particular which you drew from for inspiration?
Jack: We listened to a lot of country music before we started recording it, and that became a big influence when we made Down in Heaven. There was a lot of country music and Americana in the van. It played a big part.

Colin: The Stones were an influence too, yeah.

So how do you look at that record in comparison to the preceding two?
Jack: I don’t know. I mean, it’s progression for sure. It seems like a progression or growth of our natural state as a band.

Connor: It’s probably our most thought-out record, and we had the most time to work on it too. Everything is where we wanted it to be.

Jack: Yeah. Like, on other records we had to make do with what we had because you have time limitations or recording restrictions. There’s just a lot of boundaries, but for Down in Heaven we could just do it how we wanted to do it. It makes a big difference, and you can hear that.

How do you ideally yourselves then moving forward?
Connor: Up, up, up! Haha

Jack: Yeah. I think just becoming more and more comfortable with the writing aspect and recording. Everything so far has been a very natural progression, and we just keep growing up and kind of honing our craft a little bit.

Colin: I feel that, as you grow older, you become more accepting of the new music that you hear. When you’re in a young band and someone plays music, you’re like, “no, fuck that shit”. Sometimes before you even hear it. I’m absorbing more music nowadays.

Jack: For me, I was never really that into stuff like classic rock. Over the last few years I’ve started to become more embracing of stuff like country and classic rock; the stuff that I didn’t like or appreciate when I was younger. It’s cool. You realize that shit is the bomb, and it’s cool when it influences you. Being older makes you more open to new shit, and changing what you listen to all the time.

The garage/indie rock scene today is quite saturated. What do you think it takes for a band to stand out in this scene?
Jack: Play as many shows as you possibly can. You’ve gotta be interesting live, and that’s especially important for a garage rock band. There is so much of it. So basically differentiate yourself?
Jack: Yeah! I don’t know how to separate yourself from the pack musically, but for us we just kind of stayed true to what our sound was and didn’t change it. There’s no true Chicago sound, like what you have with Los Angeles for example. A similar sort of thing goes for Southern garage rock bands. Chicago really just doesn’t have a particular “sound”, so you get a large blanket of sounds.

What advice would you thus have for a band who are in the same position that you were all those years ago?
Jack: Say yes to everything!

Colin: Write what you want to hear. Don’t write a song that you wouldn’t listen to, I guess. When you’ve played it a million times, sure; but in the writing process you need to make sure that you want to listen to it. That’s what differentiates you from any other garage rock band, because there is so much of it, y’know? Also, just keep your live show interesting so that people are willing to pay 10-15 euro to come to your show to watch you and then say, “I wanna see these guys every time they come to my town. I don’t wanna hear it on the record, I wanna hear it live”. It’s also good if a band doesn’t try to sound too much like their record, because then it may be too bleak onstage.

You guys tour a lot, and your live shows are very hectic. How do you keep it up every night?
Colin: Try to play every show the same, and give as much energy as you can. If you play every show the same then you don’t have to think about it, and you don’t have to go into every show telling yourself what you’re gonna do. That makes it forced. We’ve been touring since we were young, and our live show is basically what took us out of Chicago.

You just mentioned that there isn’t really one particular Chicago sound. What’s the music scene in Chicago like, then?
Colin: It’s incredible. It’s so, so good right now.

Jack: The bands that are really making moves right now are High Club, Whitney and stuff. All these bands have different sounds, but they all really respect each other. It’s a communal experience but it’s also very eclectic. You can go to a house show and manage to see three bands that really don’t sound alike. We also have the hip-hop community, which is really going crazy at the moment. A lot of these dudes we grew up with as well, so it’s really cool. It’s probably getting to the peak of what American music can achieve. Thanks for your time!
Colin: No worries, thanks!

Down in Heaven is out now. Stream it below.