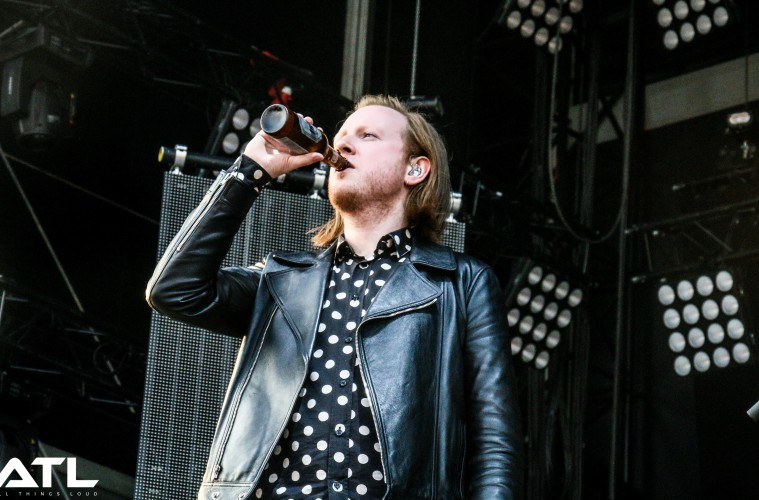 Two Door Cinema Club: “We have access to more than ever, but we’re less informed”

A few years ago, Two Door Cinema Club were on the brink of collapse. Having toured relentlessly for years on end, Alex Trimble and co. could hardly stand the sight of one another, let alone perform on the same stage. All bad things come to an end, though, with a long spell of rejuvenation leading to Two Door Cinema Club’s triumphant return. We sat down with the band to discuss their new record, Gameshow (out now), as well as their near-collapse and future plans.

Hey guys. Your new record, Gameshow, comes out in October. Tell us more about the recording process and how it came to be what it is now.
Alex Trimble (vocals, guitar): Well, we took a long break towards the end of 2013, and we went off to live life for a little while. We started to write songs individually, but we weren’t working as a band. Around a year ago, we started to share these ideas and put songs together as Two Door Cinema Club and entered the studio in January with Jacknife Lee. We knocked the whole thing out in about six weeks; it came together so quickly! After the break, we were just in the right place to make the record.

It’s a drastic sonic change. Why?
Alex: I think it came naturally, just from not being Two Door Cinema Club for so long. It [the break] allowed us to free ourselves musically, instead of putting songs into a Two Door Cinema Club framework. We were just three guys trying to make a record which was good and fun.

You lived apart to gather inspiration for the record. What was the catalyst/reason for you to take so much time apart from one another?
Alex: It was a good chunk of time, and it just became necessary after spending so much time together. It developed into a rather unhealthy situation, with typical issues like cabin fever setting in and communication breaking down. We were going at it at a million miles per minute, and there was no time to take a breath. It took its toll both physically and mentally, so we really just needed a break from the band and each other to process everything that had gone on and where we could go next. Had you not done this, do you think Gameshow would have turned out the way it did? How do you think it would have sounded?
Alex: It may not have happened at all, to be honest. We took a break almost involuntarily, because we were just on the brink. We didn’t even know if there was a future for the band. Had we managed to make another record it probably would have been another version of how I look back on the second record. It’s not a bad record, but at that point in our lives the cracks had already started to show and communication had already started to break down a little bit. With the lack of communication, we’d become afraid of sharing what we really thought. We became scared of offending one another.

So what did you do during that time?
Sam Halliday (guitar): I moved into a flat and did a lot of DIY. I got married a few years back and settled down, plus I also got into cooking, playing football every week and making music for fun. It was nice to approach music that way.

Kevin Baird (bass): I moved into a place and did some DIY. I spent a lot of time in Los Angeles, chilling out and making music for fun. I was also playing football. I didn’t really go and do any sort of huge trip to find myself; instead, I just enjoyed the normal things which had been a bit few and far between.

Alex: I was on a quest to just figure shit out. I gave up drinking, I started to read a lot and think about life and myself. My days were just finding out who I was outside of the band.

What inspired the album lyrically?
Alex: It was that process, and just taking a step outside of the band. Coming to terms with a whole other world that exists. We weren’t exposed to much stuff that wasn’t Two Door Cinema Club related for 5-7 years, and there was no way of escaping the monster that the band had become. We were defined by it, and it was defined by us. Coming out of that, it really leaves a big hole in your life when it’s been the entirety of it. It was about figuring out a personality, a set of interests and priorities and realizing how much has changed in the world since the band started, for example with how the world has been consumed by technology and the Internet, and how it absorbs daily life. Those things didn’t sit right with me, so we started thinking about the future and reckoning with those things. You worked with Jacknife Lee on the record. What did he bring to the table this time round?
Alex: Just the idea that there were no rules. If any of us got too comfortable, he would push us to go and do something else. He wouldn’t let us rest, and he just kept us moving all day every day. That could mean playing us a record or just having a coffee and a chat, but he was always driving us to be the purest versions of ourselves.

You’d worked with him before, but you would you work with him again?
Alex: I guess it’s too early to tell. It depends on what those songs become, to be honest. He’s a great friend now, and we work very well together. I would never say no to working with him on anything in our outside of the band. It’s easy to get stuck in a pattern, though, and we’re aware of that.

The single Bad Decisions mentions Information Generation. What is this?
Alex: The fact that everything is available all the time and that it’s constantly changing. You would hear the news once a week, but now you can find out about everything and anything whenever you want. There is no sense of waiting for a story to happen, as it’s all unfolding in front of your eyes. All formats of media, whatever that is, it’s at your fingertips. We have access to more than ever, but we’re less informed. We’re still ancient animals, and we’re not built for this. It’s gonna take us a while. Invincible has an element of Electric Light Orchestra to it. How did this track come to be?
Alex: That was a song which had a demo of me and a piano. That basic structure was there, and it felt like a very traditionally put together song. I’m a huge fan of Jeff Lynne, and ELO was certainly there as a point of inspiration for that song. It seemed natural, but also fun to go in another direction sonically. We would make it more electronic or rhythmic; we programmed most of the song, which is going against the classic nature of song writing.

In all the years between Tourist History and Gameshow, what would you say is the most important thing you learnt?
Alex: Probably not to fall into formulas and sticking to just what you know. We’re realizing now that it’s great to go on instinct and push the boat to do something different. It’s good to keep it fresh. We got into the pattern of writing the same song over and over again, but now we’re able to do so many things. We felt so restricted in the past, but now we feel so free to just write songs.

Thanks for your time!
Kevin: Cheers!

Gameshow is out now via Warner Music. Stream it below.