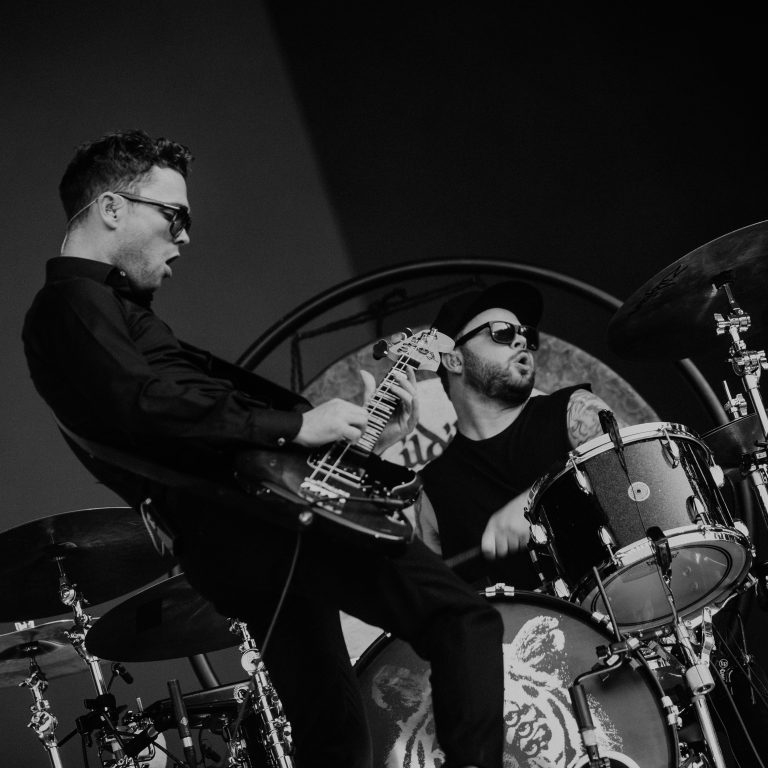 A Wall Of Groove: Inside Typhoons With Royal Blood’s Ben Thatcher

Two years ago, Royal Blood frontman Mike Kerr sought sobriety and took a huge leap in creating positive change for himself. In the 24 months since – and 600+ days since their last show – he and drummer Ben Thatcher wrote an album (Typhoons, out today), abandoned its recording halfway due to a pandemic and used that time to reflect and inject disco grooves into one of the year’s most refreshing rock albums. Jack Parker spoke to Thatcher over Zoom to talk all things Typhoons.

Hey Ben. How are you?
Good man. All good.

As we sit here today on other sides of the channel, 614 days have passed since your last proper live show: Rock en Seine in France. What are your memories of that day?
That was a fun day. It was hot! I remember being with a lot of my friends and we had a great time and a great show. It’s strange to think that that was the last show, because obviously we had no idea it was the last one for a while. We celebrated like it was, though!

It’s crazy to think that this was the end for the foreseeable future. What’s one thing that’s going to change about live music when it returns?
I hope it picks up from where it left off. Obviously there’s going to be big excitement when it returns, because people just can’t wait to get back into it. Isn’t it strange that people can’t wait to get back into a hot and sweaty room with each other?

Haha, yeah. Typhoons is your brilliant new album, and much of it is self-produced. What was the determining factor in you making that decision?
It wasn’t really a decision we consciously made. It was more of a necessity as we were writing and recording simply out of us just trying to be creative and bored. These songs came out and while we were laying them down everything was being self produced. Every song came from a different place, and we also worked a little bit with Paul Epworth and Josh Homme. We recorded the album in four different studios so there’s plenty of different ways how these songs came about. We really trusted ourselves in what we wanted to make and what we wanted to produce, and I think we were well equipped to do so.

Josh Homme worked with you on Boilermaker. Were you able to draw the line easily between friends offstage and collaborators in the studio?
So Mike had done the Desert Sessions with Josh and the US and gotten to see him in a producer role. We always wanted to work with him and he’s a great friend, but for us he’s also a guru and someone we really respect. It was an honour to work with him and he made it so much fun for us. We were able to be creative and he made us do things which we’d have normally not done. There’s also two songs on the Deluxe edition of the album – Space and King – which we did with him. Boilermaker and King were also two tracks we trialled on the road.

Would you ever want to do a whole record with Josh?
Yeah. Boilermaker was the beginning of the record, and we just wanted to track what we had. The rest of the time we were searching for what we really wanted to do, and Josh gave us the confidence to start that search and do what we thought was great.

Did you listen to much disco growing up?
Yeah! We’d play disco and all kinds of pop stuff on the tour bus and backstage and we’d have these big parties when we went from city to city. We’d be blasting ABBA and the Bee Gees on these bus parties, as well as massive 80s songs and the one hit wonders of our days. It was a party and we wanted to bring that party to the stage. We were influenced by so much growing up, especially French music like Justice and Daft Punk. They’re both two pieces just like us, only the difference is that they use keyboards whereas we use guitars and drums. This sound is in our DNA.

So what about you as a drummer and your percussive disco influences. What were your reference points for this sound?
A lot of it was about laying back and respecting the song. I taught myself that it’s not normal to only have two members, and in others bands I was in I always had to sit back and give the rest of the musicians space to do their thing.

How long did it take for you to really hit your stride and settle on a more groove-oriented sound for Typhoons?
I guess Trouble’s Coming kind of revealed the four to the floor beats, as well as the production style and strings which we’d never tried before. It wasn’t until we made Typhoons and Limbo, though, that we were really able to back that sound up and go with it.

Where do you draw the line in trying to find balance between “sounding like Royal Blood” and pushing things forward?
I think it’ll always sound like Royal Blood for as long as you’ve got Mike singing on it. It’s quite obvious, but you have to take risks and try other things. The beats in this sound are simpler while the drums are big, powerful and have lots of weight to them. There are also lots of intricate bits which make them work, and it’s not so much a case of thrashing the drums out. It’s all a lot more thought out.

For a band like Royal Blood, playing live is obviously vital and right now just impossible. How long did you sit on the songs before you decided the time was finally right?
We had a bit of extra time, having recorded the album in March 2020 just as the first lockdown happened in the UK. We had to abandon the studio halfway through the recording process, but during all that time away we thought we had an album but then eventually came back to finish things off. The extra time gave us the opportunity to reflect and be creative, which is when Typhoons, Limbo, Oblivion and Mad Visions turned up. We thought we were finished and then we went back and recorded these songs. It’s strange to think what the album would have been like without those four.

Has being in lockdown also enabled you to look ahead beyond Typhoons?
Not really. We hadn’t written any extra songs, and Mad Visions and Oblivion were the last two we did. After that it was time to mix, master, sort the artwork and do all the other band stuff you often forget about.

In other interviews Mike discusses his road to sobriety and the highs and lows of so-called rockstar living. How did you personally experience the highs and lows of being in a successful band and how did you cope with the pressures?
I’m quite an optimist, so I feel very privileged to be able to play the drums in a successful rock group who get to tour the world and make a living from it. It’s hard for me to complain but obviously life happens, and life changes. This is not a normal life to live and there are plenty of pressures connected to being an almost celebrity-like figure. There’s always someone in each town who wants to have a drink with you and live a bit of that rockstar lifestyle, and it’s the road to destruction. At some point you have to choose what you want to do, and Mike wanted to become sober. He knew that was the only way of getting out of this and he took that path. I’m really proud of him for doing it. It’s made him more creative, more confident, and he looks great too. For me it was different: I’m a different person with different feelings and I behave differently to Mike so I worked on myself in a different way.

You mention Mike being more creative. On this album there’s a very un-Royal Blood sounding piano song – All We Have Is Now – at the end. Tell me more about that one.
It wasn’t initially intended to be a Royal Blood song, as you can probably hear. One night Mike played it for me in the studio and it just showed me how great of a lyricist and songwriter he is. I told him that we needed to record it right now so we set up some mics, pressed that red button and just did it there and then. Aesthetically it doesn’t fit in with the disco vibes across the album, but it was another rule which we chose to break. If we didn’t have this song it would have never been heard, which is a shame.

Over the course of the last year we’ve seen the lack of support for the music industry from the government, but we’ve also seen a number of flaws within the industry exposed. What do you think we as an industry need to do to improve for a better, stronger future?
I think we’ve all learnt that the arts are one of the most valuable things in life at this time. I don’t know where we’d be during this pandemic without music, without art, without movies, TV or whatever else. It’s proof that people need these things to get through life and it’s a real shame when you think about it. If you took all of these things away from the MPs I don’t know how they would function either, yet they just take it for granted and benefit from it. It’s a difficult one; a lot has changed thanks to Brexit and the whole pandemic, and it’s made it a lot tougher for bands to do anything. Touring, making money, all of it is really difficult now.

It is. To end on a lighter note, what new bands or musical discoveries have you stumbled upon lately?
I’m not too sure about new bands but there’s definitely new music from bands I like! IDLES and Architects both wrote fantastic records, and Tiger Cub – who are also from Brighton – are about to release a wicked album. There’s a lot of really good music out there at the moment. Typhoons is out now.