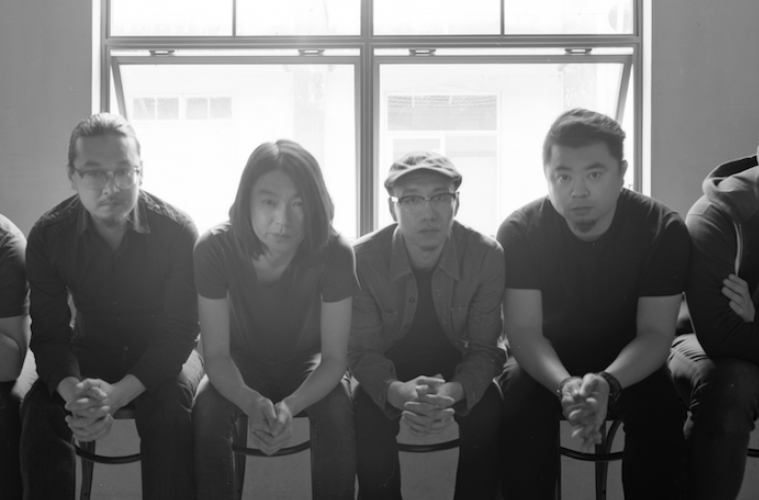 Wang Wen & All Shall Be Well: Post-Rock Lighting Up Haarlem

Wang Wen are a Dalian, China-based post-rock band with quite a discography under their belt. Their 10th full-length studio album, entitled Invisible City, was released in September 2018, and on it the band present a refreshing, warmer sound when compared to their last two album: Sweet Home, Go & In Course Of The Miraculous, both released in 2016. With a heavy focus on instrumental soundscapes and grandiose walls of sound (comprised of multiple instruments generally not seen in a rock band), they aim to hypnotise crowds and bring them on an emotional journey. In order to fulfil this promise, the Haarlem-based All Shall Be Well (And All Shall Be Well and All Manner of Things Shall Be Well), shortened to (AASBAAMOTSBW), were present to support Wang Wen with their cinematic and melodic take on post-rock. Having self-released two albums so far, ROODBLAUW and BLAUWGEEL, All Shall Be Well are still an upcoming name in the post-rock scene, however they’re already making quite a name for themselves on social media and streaming platforms.

All Shall Be Well kicked the night off and instantly set the mood with purple, orange, red and blue mood lights sparking up the stage as white spotlights periodically lit up the quintet. Each player completely focussed on their respective instruments; the band has a line-up of three guitarists, a bassist and a drummer. It is immediately apparent how introverted and self-reflective this band are, with little to no crowd interaction and a full focus on creating soundscapes for the audience to be completely immersed into. As is prominent in most shoegaze and post-rock projects, a wide array of guitar pedals lightly flicker at the feet of each band member as they meticulously pluck away at their instruments.

The second song has a much deeper, moodier tone and shifts the focus entirely. A tambourine is played softly by the third guitarist as the song slowly builds up in to what seems to be a heavenly post-rock climax. The drummer has now shifted his attention to playing sample pads in his kit, adding to the wall of sound being created by the rest of the band. All instruments seem to be played in perfect unison, as if the band was having a long philosophical discussion with each other, yet somehow all agreeing. In the moment, the drummer loses one of his drumsticks but quickly grabs another as to not lose the intense moment of bliss created as the track ends. It is with the third song on the set list that All Shall Be Well truly show the magic of their existence in all its glory. A track starting with a long drone-like element as stroboscopic purple, blue and pink lights flicker through the room. Drums kick in to accompany the repetitive yet intriguing guitar tones, with hits on the rims of the toms indicating a midway point in the track as a long-winded build-up arises and finalises in arguably one of All Shall Be Well’s best post-rock climaxes, setting a cinematic and melancholic tone that shocks the entire crowd.

The final track on their setlist was their grooviest and most danceable. Albeit starting slowly with steady pacing, each member’s instrument slowly joins in after each bar of the beat until all band members play their respective instrument in complete synchronicity. Fans swerve left and right and start bobbing their heads as the melodies of each respective instrument intertwine, while a bright red mood light illuminates the room in a romantic, yet playful setting. As the groovy drum beat kicks in, the audience slowly starts dancing along in time to the song. Ultimately, bell samples slightly fading the track out indicate that their set comes to and end. A long applause ensues as the audience, still in awe by the performance, cheers All Shall Be Well on.

The crowd quickly fills back up after a 15 minute intermission following All Shall Be Well’s set. A mixture of generations are present tonight, with the youngest crowd members being 3 and 4-year olds with protective headphones on, as well as older generations in the back of the room or on the balcony, leaning on the balcony, enjoying the show from a distance. The band’s uniqueness is immediately apparent when observing the chaotic set-up present on stage. A lone tuba sits on the far left side of the stage, beside a large xylophone and a single bass drum. Two guitars sit upon their owner’s chairs in the middle of the stage. Two synthesizers lined up perpendicular to each other fill up the right side of the stage, and it’s a plethora of instruments ready to create otherworldly soundscapes.

A drone signals the start of the performance as the crowd fall into a complete silence and Wang Wen walk in to their designated areas on stage. After a long intro, Daybreak, the opening track on their latest release, starts with the iconic xylophone melody echoing through the small room of the Patronaat. A vocaliser is played on synth adding to the mystery of the track as a tuba kicks in. Hypnotic, bright white spotlights illuminate the stage as the repetitive melody is rung out, and the crowd watches in awe as Wang Wen completely immerse themselves into the music. A drone-like outro gives a moment of breath as the track fades out and the frontman introduces their latest album and thanks the crowd. The next track starts off with a steady shaker rhythm and a pin-ponging synth rhythm as vocal samples are played out to the crowd. Stroboscopic lights flicker through the room as delayed synth chords pierce through both the vocal samples and the subtle piano melodies. Hypnotic beats and synthesised sounds stab through drone-like guitar notes as the song comes to a close. Yellow and green, almost opal-like blinding lights flash as the trumpet ends the track. A grandiose moment in post-rock that shows the dichotomy of this band – Asian traditional music with recognisable post-rock tropes.

A sampled woodwind instrument introduces the next track in the setlist. Guitar chords are strummed alongside each other, and rather quickly a relatively rock drum pattern joins them. After a steady soundscape is established, the song comes to an abrupt pause. A singled-out tuba melody starts playing and quite rapidly, the drums kick back in, signalling the next progression in the track. This passage shows how proficiently the different members and their respective instruments work together as a whole. The crowd, now warmed up, starts moving along to the rhythm as the song shifts and takes on a grandiose post-rock outro. Mail From the River, arguably Wang Wen’s most iconic track off of the new album, comes next. The track starts with a recognizable melody being whistled and played by the xylophone in perfect unison. An eerie drone sets the pace, something that sounds like it was plucked straight from a haunted house. The mood instantly shift to accommodate a feeling of being haunted, deep in the night, yet with a ray of hope to be seen in the distance. Glitched out, rainbow coloured lights add to the ambiance portrayed by the track.

A steady drum beat, a repetitive guitar strum and slow tuba notes ringing out signal the next track. Another one from the latest album, this track beautifully shows the influences from both traditional Asian roots as well as the Western take on post-rock. A faint noise sample periodically scatters and bounces off the walls of the Patronaat, reminiscent of waves crashing against the shoreline at sea. Purple and orange mood lights take over the entire room as the trumpet starts playing. The second percussionist then ends the track by giving a steady drum beat on his single bass drum, positioned next to the xylophone. The next track is more of a romantic one. Soft xylophone note ring in one ear and out the other and guitars are gently plucked as the drummer provides a soft backbeat to the song. From this song it is apparent what Wang Wen are capable of doing – telling stories through music. Stories through which the listener is transported from beginning to end, experiencing a myriad of emotions throughout. A wall of sound is created as the song comes to an epic close.

Wang Wen immediately jump to the next track, not letting go of the wall of sound they’d just created. Guitars are played with bows instead of plectrums, elongating each note as it is rung out. Tuba and synth notes attempt to pierce the wall of sound, as if in direct competition with it. The first hint of vocals are heard through the song, with the frontman wailing out to a backdrop melancholic, whirling noises. A long applause and a thank you from Wang Wen follows. The band gives a nod to All Shall Be Well and thanks them for them having opened the show.