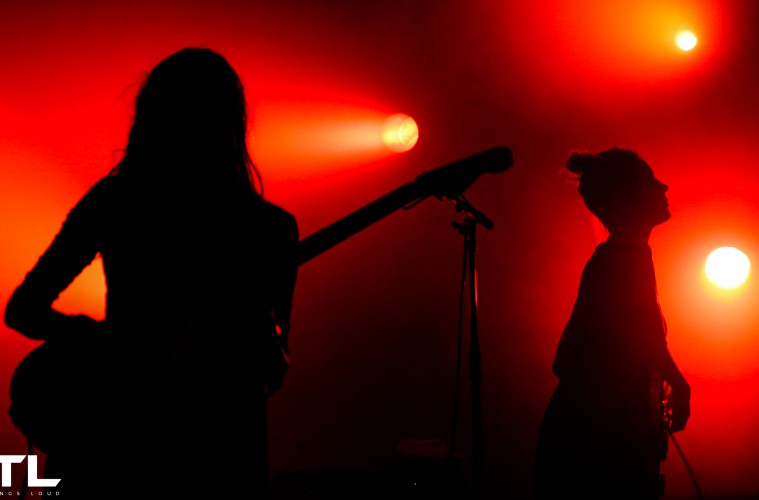 Later this week, LA quartet Warpaint will put out their hotly anticipated 3rd studio album, Heads Up. Although you couldn’t call it a complete departure, it definitely does showcase a side to the four-piece which many hadn’t anticipated would surface just yet (if at all). Having largely ditched the woozy, minimal vibes in favour of some pulsating rhythms and melancholic grooves, Heads Up puts Warpaint in a light which everyone had always hoped to see them in: emphatic, haunting and blissful. We caught up with guitarist Emily Kokal during a hot promo day in Amsterdam to talk change.

Hey there. Your new album Heads Up comes out next month, and it has a relatively groove-centred vibe. It’s a slight departure from previous records, but why did you go down this path?
I mean, I think we’ve always been groove-centric. We just felt like mixing it up and getting out of our comfort zone. In my opinion, we’ve always been pretty groovy in terms of the drums and bass, and we have songs like that which we’ve been playing live for the last five years on tour. Eventually we just realized that those are the types of songs we’d like to play and write more of.

Your previous records display a more introverted vibe, with Heads Up leaning more towards an extroverted spectrum. Was this a conscious decision?
Maybe a bit, but just in different places. We all evolve and change, and maybe we’re just a little less heavy and moody. We’re feeling a little lighter this time round, and we want to facilitate that.

Jake Bercovici produced Heads Up. What did he bring to the table?
He’s an excellent musician with a great ear. He helped us to tone our skills, as well as help tone the conversations between us and our instruments so that we could find one central focus. Jake gives us a trustworthy outsider perspective, and we could definitely trust him. He has an objective and fair mind. I just want to pay some attention to the lyrics. Were there certain things that you drew influence from for inspiration?
For me it was just realizing that I am really lucky to have my bandmates, as well as to have them as friends. It was also about realizing that I have companions and that we have a long-lasting relationship which has been tested many times. As far as I can tell, it’s not going away, and it’s not something that everybody has. I don’t want to take that for granted. I can’t really speak for the others, but there isn’t one cohesive concept; it’s whatever comes out, like relationships, being a human or self-love.

You claim to pay a lot of attention to details. What kind of things do you look out for in that case?
I mean, everything? Like, the balance between instruments and whatever else. It’s a very specific thing that you can make, and on Heads Up I realized that the way in which a song is mixed can completely change it. It’s something that can make it the opposite of what it first was, depending on how you treat things. Detail is very important, especially in expressing an idea. I guess that it was just paying attention to intention and translating that through your decisions.

One track of particular note is New Song, the biggest departure on the record. What were the driving forces behind this track’s fruition?
It was a fun exercise to write something more distinct, and then it also didn’t seem like it was lacking anything in specific. We continued to work on it and almost didn’t even put it on the album because we forgot about it. When we rediscovered it Jake told us that he really wanted it on the record. There were things about New Song that maybe didn’t feel right, but we love it. There’s a lot of things going on and there were many different directions in which we could go, but New Song always felt like a perfect first single.

Upon first listen, the track bears reminiscence to older song Disco//Very from a groove perspective. Do you think that Disco//Very planted the seed for the way in which Heads Up ended up sounding in places?
I mean, I think that Disco//Very is Jenny’s (Lee Lindberg, bass) favourite. I love it too, but she listened to it more than I did. From our angle, there’s that aspect of being brought to the party. I think that Disco//Very was Jenny’s, even though it was born out of a jam. She wanted us all singing, almost like it was a hip hop track or group effort. Each person has a verse, but there isn’t much of a linear connection.

Live, you manage to transform your moodier tracks into absolutely hypnotic stalwarts. Do you consider Heads Up to be an album made for the live stage?
It’s more of a studio record in terms of how it was put together, but I think it would translate live better than ever. It’s really big.

Between this record and the last, you all did your own thing. How did this enhance Heads Up?
In ways that you can probably imagine. People think that we’re a collective, but on our own we get to be the boss. There’s a lot of collaborating, listening and being democratic. When you do your own thing, you get to exercise your own power over what you do. It’s important to be both ways. Anyone who works alone a lot should try collaborating, it has a lot of benefits. According to a recent press release, you only spent four to five days in the studio together working on Heads Up. Did this not create a feeling of being disjointed, or did this enhance your individual creativity?
I think four to five day is a bit exaggerated, because we were actually together quite a lot. A lot of ideas fly around, and it can be quite overwhelmingly draining. There may have been days where we weren’t as a group, but maybe we were in pairs or something. It rotated a lot.

How do you see your sound progressing in the future? Do you see yourself stripping things back down or going for a more bombastic sound a la Disco//Very or New Song?
Disco//Very and New Song are very different yet also the same. I feel like a lot of our songs are that way, but we like the mood, we like to dance, and we like to groove. Our slower songs are also very groove-based in my opinion, and we’ll continue to do that. I’m not trying to disagree with you, but we’re just accentuating our current qualities and that’s something we’ll keep on doing. Maybe we’ll do an EP centred on piano pieces, or just drums to mix and change things up. I think what’s exciting is to never be the same and always follow new impulses.

Finally: what’s next for Warpaint in the upcoming couple of years?
Keep expectations to a minimum as to what you’re gonna hear, because it could be a number of things. We pull from many different angles as we have four different writers, all with different backgrounds and abilities.

Heads Up comes out on Friday (23 September). Buy it here.