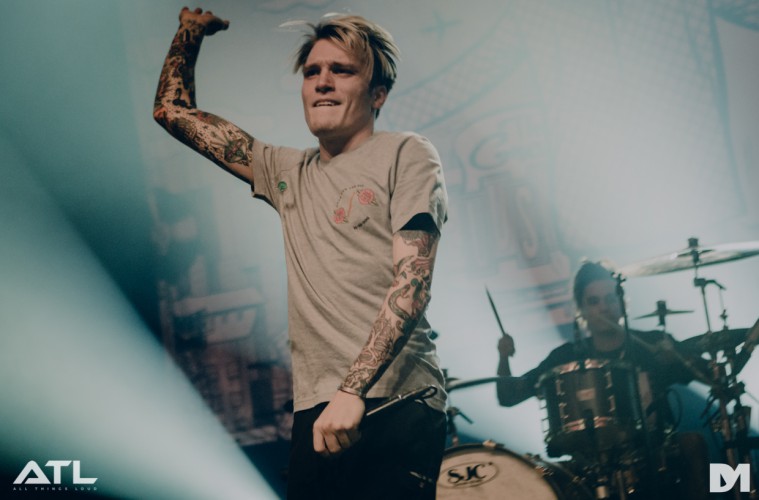 Neck Deep have geared up for their appearance at Download Festival with the official video for new single Don’t Wait, which features Architects frontman Sam Carter.

Speaking of the video, frontman Ben Barlow said: “Don’t Wait immediately took on a political message for me, as politics and outrage/anger have always gone hand in hand. But it also speaks a lot about unity amongst society and looking out for your fellow humans, as, ultimately human connection is what will bring us all together to (hopefully) make the world a better place.

I knew the video had to convey that message but we also wanted it be somewhat cryptic and not too on the nose. For the first time in the history of the band, I came up with the basic treatment for this video and teamed up with good mates and long time collaborators Joshua Halling and Daniel Broadley (Our World Is Grey), working closely with them on the video was an awesome process and they really took my idea and ran with it.

The premise of the video is that there are three characters who are all at different phases in their lives, yet they are somewhat connected (how they are connected is for the viewer to figure out).

The ‘beggar/deity’ character is prominent in all of their lives and has tried to guide them in what they’re doing, however successfully or unsuccessfully. As well as this deity, all the characters are featured being bound by ropes, metaphorically being ‘controlled’.

All of these visual references tie into the lyrics of the song and it’s really down to the viewer for them to try and understand it and work it out! For that reason I think it’s one of the most interesting and visually appealing videos we’ve ever done. We wanted to stray from the typical ‘band in a forest’ type set up and really let the story and the meaning of the song drive the video. OWIG really did nail this one and I’m beyond stoked to have been involved in some capacity. All I can say is good luck working it out! Enjoy!”