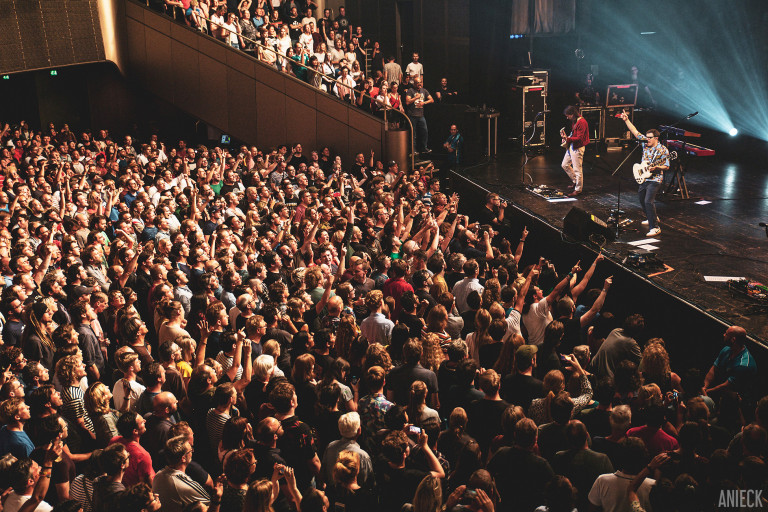 Weezer in Utrecht: The Algorithm Knows What It’s Doing

Like them or hate them, but the mythology surrounding Weezer has given them a shelf-life way beyond what anyone would have expected from a band of their kind. The calculated way in which they manage to generate hype, whether through frontman Rivers Cuomo’s posting style or their high-concept albums and covers, they know that at this stage the only reason journalists are going to pay attention to them is if they find new things for them to bump their word counts. Everything they do feels like it’s been discussed by a team of marketing experts, the sort of approaches that see Black Mirror as an inspiration rather than a cautionary tale.

In addition to his prolific musicality, Cuomo has used his time to become an adept coder, developing scripts initially for fun, but later realising that he can use these skills to help the band. He’s supposedly written a script which decides Weezer’s setlist night after night, using information such as tempo, key and crowd response to decide what should be included in their next performance. It’s a far-fetched concept, but with just enough believable elements to it to reel you in. With multiple eras of popularity behind them, and a back catalogue now big enough to ensure that at least some people will be disappointed, the sophistication that the algorithm would need becomes more complex with each album. Whether or not any of this algorithm talk is this is true we may never know, but the very fact that I’ve written it right here is what Weezer are trying to achieve. Once again, they’ve proven that they know what they’re doing.

With the traditional W backdrop adorning the stage during last night’s show at the TivoliVredenburg in Utrecht (their third in Holland since 2001), the band set the bar high from the start by opening on Buddy Holly’s chugging notes. A controversy-free, universal song to placate Weezer fans of all eras, it managed to cut an air of tension which permeated the audience, many of whom had the edgy expressions of those who hadn’t been to see a band live in years and were stressed at having their personal bubbles violated. The moment Rivers barked, “what’s with these homies dissin’ my girl”, the audience’s collective voice joined in unison as arms punched the air in euphoric unity. Following it up with Surf Wax America and My Name Is Jonas was a sure-fire way to bring the older crowd on board, alleviating any worries that the algorithm was malfunctioning. They played with the tightness and ease of a band who’ve played these songs thousands of times before. So simple and familiar were they with the music, that they took the opportunity to do some semi-choreographed posturing as they played. Back-to-back guitar playing, crowding together around a mic, these were the moves of 80s stadium rock at its finest. A fever of snaps from the photo pit lapped up these opportunities that presented themselves before them in a way so conveniently staged that they couldn’t believe their luck. Once the third song was over and the photo pit emptied, the band’s interactions went back to more natural motions once again. A coincidence? I doubt it. They know exactly what they’re doing.

Fans of mid-era Weezer were treated to a double-whammy of Beverley Hills and Pork & Beans, two of the band’s later big hitters, the start of a new era. Pork & Beans in particular saw the crowd pogoing with feverish intensity that left many of the older generation in the crowd looking concerned that their shoes might get stepped on. It took the clinical pop-sheen of Feels Like Summer to unify the room in a muted response to one of their latter day attempts in becoming Dorian Gray. The inevitable covers crept into the setlist during the second half, the algorithm having decided this was the best place for them to introduce a new angle to perk interest from the crowd before the inevitable end-of-set big hitters. The Turtles’ Happy Together (featuring a verse of Green Day’s Longview), A-Ha’s Take On Me and Tears For Fears’ Everybody Wants To Rule The World from the band’s Teal Album all sounded crisp and faithful in their cover renditions. The real surprise presented itself with a trio of Pinkerton tracks, interspersing the covers with Pink Triangle, The Good Life and El Scorcho, thoroughly pleasing the babysitter-dependent contingent. With Say It Ain’t So closing out the main set, Rivers didn’t even need to sing the chorus to hear its words, letting the crowd do the work for him.

The encore began with a barbershop rendition of Buddy Holly frequently derailed by an enthusiastic crowd attempting to sing along with their own timing, drowning out all intricacies of the harmonies from the stage. This was followed up with a pounding rendition of Why Bother?, before closing out on the inevitable cover of Africa by Toto. The perfect synergy of viral culture whose origins came from a petition to get the cover to happen in the first place, which the more cynical amongst us might suggest was started by Rivers himself. It’s amazing that a band with such a simple formula can inspire so many strong feelings to this day, but that’s exactly what they want and continue to do. They are acutely aware of their position within the industry, and very few could find reason to complain about a setlist of the calibre that they played. Behind all the trolling and stunts, it’s easy to forget how good a songwriter Rivers is, the real reason that people were there. The AI knows what it’s doing, and it’s doing a great job.