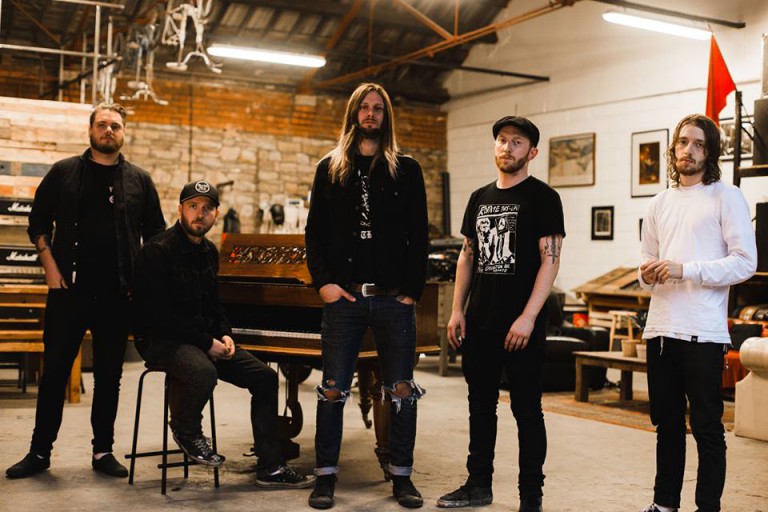 While She Sleeps’ Mat Welsh: “The music industry makes money for everyone except the creators”

Tomorrow, While She Sleeps will put out a record which may well stand as career-defining. You Are We is an absolutely destructive body of work which features pulsating rhythms, Loz Taylor’s manic vocals and piercing guitar lines. It also doubles up as the outfit’s first record since going independent, having built their own studio-cum-warehouse in the process. We called up guitarist Mat Welsh to talk industry struggles, social commentaries and his own musical upbringing.

Hi there. How are you doing?
Yeah man, I’m good thanks!

You’re currently gearing up to release a new record. Can you tell me more about your decision to go independent? I’m sure you get asked this a lot
Yeah! Basically, when we were creating some sort of following we were approached by an indie label called Small Town Records. That label was amazing; it was run by two guys and they just absolutely killed it. When you first get signed you’re like, “oh my god I’m getting signed!” Then we got scouted by other labels and eventually signed to Sony for a couple of albums. It was all very overwhelming, and initially we thought it was the be all and end all. Over the course of a few years we realized it wasn’t exactly what we thought it was, and we were basically treated like a number on a screen. It wasn’t very personal and we didn’t like it. Labels don’t serve as much of a purpose as before, and they really need to adapt to change. Nuclear Blast do that, and they’ve been doing a great job. When we finished at Sony we got a few other offers, but because we’d been angry at labels for a few years we decided to make a change to the system and cycle we were in. We had a vote on going independent, and luckily everyone voted in!

So there was never any desire to do something other than go independent?
Not really. We got an offer for another label deal, but it was basically just a load of money being thrown in our faces. It just turns into a debt which we have to pay back and this was not the world I wanted to be in. Being independent gives us complete creative control. The industry fucks over musicians, and it makes money for everyone apart from the creators. Sustainability is basically impossible. How am I supposed to do this for a career when the industry doesn’t allow for it? I wanted change, so I went for it.

I just want to focus on the transitional period between Brainwashed and You Are We. What went down?
To be honest, we never really stopped to take a break. We just carried on and immediately started writing. Then we built the warehouse, and after that we just started operating out of there. Nothing specifically changed, to be honest. I suppose we did grow up in a way, as the warehouse became a large responsibility which essentially made our work ethic more focussed. We never think about the record we want to make, as we just start writing music and continue doing so if we like it. One of my biggest hates is people pigeonholing us, because I want them to listen and decide for themselves what we sound like. We want to make music which we felt good about.

So how did this develop into the music on You Are We?
We went from the practice room into a studio which we built, basically going back and forth and creating some pre-productions. It got to the point where we just picked between the bits we loved, and the ones which we think didn’t really suited the album and thus didn’t make the cut.

Tell me a bit more about the space you guys built for the record. Any plans to do more with it in the future aside recording?
It’s in Sheffield! We wanted a hub where we could live and operate out of, and where we could create things while not stepping on each other’s toes. Everyone could be there and do their own thing, which was important. So we took a big lease out on a warehouse! We learnt how to make it soundproof and acoustically friendly, so it was basically like building a house. Now, we have a fully functioning space.

How do you plan on translating this record to the live stage, performance and production wise?
We’re about two and a half hours away from doing it for the first time! I’m just about to have my tea and then I’m back to go and play. We want to bring the album to life, to be honest. It’s the usual While She Sleeps show, so there isn’t much production. It’s just us, but we have customized our equipment and made it somewhat more individual. We wanted to paint a picture of the album with our live show, and how we picture it in our minds through an artistic light. The live show is an artistic expression of the album.

I just want to focus on you as an individual, and as a musician. Tell me more about your musical upbringing.
We listened to a lot of music in my household when I was younger. As soon as I started to see more stuff to do with bands I got a real sort of urge. I’ve known what I wanted to do since I was about 10 or 11 years old. My Dad played me a lot of Jimi Hendrix, and I really liked that. I liked the detail in the equipment and how it all worked, like analogue and stuff. Once you start to understand how an instrument makes a certain noise, then it becomes a super fun experiment. As much as I love playing guitar, I also fell in love with the idea of a band and what the whole artistic, creative side of things had to do with it. Being in a band is like being in a team or gang where you get to design something, and that something comes with all this art which symbolizes the music. I fell in love with that as much as the music. I just really love the expression side of design.

So I take it you designed the You Are We artwork too?
Yes, I did!

Tell me more about it.
The idea behind it is basically trying to symbolize everybody being one. It also concerns taking a positive and negative approach to what pollution is and how we’re all in control of it. I like symbolism and all that, so on the artwork it’s basically You Are We written in the four most commonly spoken languages: English, Spanish, Hindi and Chinese. I wanted to make up this symbolistic piece out of all these languages so that it’s as easily understandable by as many people as possible. We are quite anti-border, and we’re against the separation of people which is created through things like race and religious belief.

It’s becoming increasingly important for metal bands to ‘have a voice’ within their music. What’s your take on the importance of incorporating social commentary into music?
The world we live in gives us a lot of inspiration to write. I’ve never felt an urge to write about how I feel on an emotional level. I grew up listening to funk music, and I love protest songs. I like songs which make you feel like the minority has a voice. It’s quite an anarchic one, but then in a more positive way. As we continued as a band who play on bigger and bigger stages, I realized that I never wanted to waste the opportunity to have something important to say. Whatever I say has to be good, though. Whether that’s reminding people to think for themselves or whatever, it has to be positive. That’s what I want to do with music. I don’t want people to think that we’re politicians telling them what’s supposed to be right, I just want to be able to express our beliefs after seeing the world first hand as a touring band. A lot of the TV you see is bullshit, and it’s just there for people to waste time so that time itself keeps passing by. I don’t want people to think about that of us.

Thanks for your time, and good luck tonight!
Thanks! It was nice speaking to you.

You Are We comes out tomorrow. Order it here, and listen to Feel below.