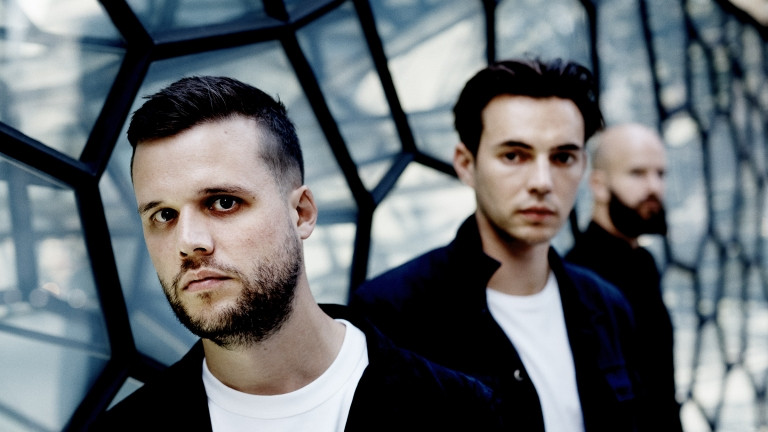 In the life of a modern day musician, ten years can be a hell of a long time. In fact, to any artist, a full decade of longevity in the creative sector is a great achievement maintained by few and lost out to by many. That makes it all the more special when you realise that you’ve now made it to a point of confidence which allows you to take your career to the next step. This is particularly pertinent to the story of White Lies, a band who have just put out their fifth studio album (the aptly named Five) in the same year that they celebrate a decade of making music. Jack Parker caught up with frontman Harry McVeigh to discuss the change in direction they undertook on Five, self-funding the record and their confidence moving forward.

Hey Harry. Five is the new album, and it sounds great.  Can you tell me a bit about the timeline from the end of Friends leading into this campaign?
Yeah. We finished touring Friends towards the end of summer 2017. Shortly after that, Charles (Cave, bass) and I went back into the studio to start writing again. That was a process of a few months in my London flat, where we sat and worked every day on hammering out some music. We then went to Los Angeles and worked on those songs for a couple of weeks before returning to London and recording with James Brown, one of our favourite engineers. We finished Five around four months ago [at time of writing], and now we’re just waiting for all the mania and touring to start again.

You left Infectious after Friends and decided to self-fund Five. Any regrets in the long-term?
I guess Five just didn’t really do what Infectious wanted it to do, but now at PIAS we’ve found ourselves back in a good place. We’re much more popular in places like the Benelux than we are in the UK so it’s always good to get a lot of work here with a label who supports what we’re doing. There’s a big chance of us being so successful here, and it’s incredible that Time To Give has – at seven minutes long – been so well received. It’s great. I don’t think we have any regrets about anything, to be honest. If you’re happy when you’re making the songs then that’s great; down the line you’ll find songs you didn’t enjoy as much but that’s ok. These songs sparked a moment in time and they transport you back to what your mindset was in that particular moment. The choice to self-fund was interesting, as almost our entire business comes from playing live. We looked at booking this upcoming tour almost a whole year ago, but without a record deal we knew that we had to make an album which we could use to invest into our live show, something to give to our fans. It was an easy decision to make, as we still had a publishing deal which we took advantage of in spending some money. I feel confident that we made a good choice and a good record.

Bar the influence of people like Flood, Five was – like most of Friends – self-produced. Is this a path you’re now confident enough to keep exploring or do you sometimes miss working with a producer on an entire record?
I think this is probably how we’re going to end up making records, to be honest. It took us a while to find out how we work best, just as with any band. We had to find our purpose and discover what gets us the best results. I think we do all feel confident in that now, as we know what makes the band work best. That’s not to say we don’t need help – we do, but more from an outsider role. James Brown is an old school engineer; when you think back to the greats of the 60s and 70s then that’s him. You have someone really technical around who can make it sound amazing, and when you can do that the studio becomes a lot more creative. That’s a way of working which we really like. Having said that, you never know; we might end up meeting someone who we really love and who feels like a fourth member. For now, though, this is the way we work best.

Where did you look to from a lyrical perspective?
We didn’t overthink it too much this time round. When we start writing, the priority is to do anything we can, as it’s hard to write a song in any way, shape or form. It was the aim to write some really good material. These songs are all quite varied, and they sound different. That was born out of the way we approached the songwriting and the initial demos; sometimes you have to push a song in an extreme direction and do something you’ve never done before. We tried not to reign it in too much, and that’s a huge part of this record. A big part of what I like about Five is this reluctance to reign it in, actually. As we grow older, we become more open to these stranger things.

Five’s been described as the closing of one circle and the opening of another. What does it mean to you in that sense?
We’re at an interesting point in our careers. For us, reaching the fifth album was a moment which made us realise that this is now a proper career we could potentially do for another ten to twenty years. That caused a shift in the way we thought about what we do as a job. For most bands you think of it as something fun and temporary, so I think that our mindset changed in the run up to Five when we realised that White Lies is here to stay. There’s nothing which could happen right now that could cause us to break-up. When we realised that our first album came out ten years ago it all slotted into place, into that feeling of doing whatever we wanted to. We can do what we like and still be around as a band, and that’s a good feeling.

A lot of the songs carry that traditional White Lies sound, although there are definite deviations. Denial has a heavy classic rock solo, for example. That’s a new sound, but how much of a say did people like Alan Moulder have in the way this ended up sounding? Given his work with bands like Smashing Pumpkins.
I don’t think he made a huge impact on that song form a mixing perspective, but having said that there were definite moments with Alan where we’d decided not to push it in a certain direction. That Smashing Pumpkins guitar sound, for example – we told him not to be afraid of making the song sound like that. I’m glad you picked up on this, because there are definitely things on the record which we’d never done before. Like using an acoustic guitar, we hadn’t done that before so it was a big thing for us. There’s a lot of variance on Five and it’s hard to predict what could happen next.

Tell me more about the choice to use an acoustic guitar.
We’ve always played stuff on acoustic guitars and strummed away, but I never really felt like it sat right in the sound of our band. It sat well with a few songs, though, and the songs which use it also had them in the initial demo so it felt weird to suddenly discard it. These aspects of writing and recording were fun as we hadn’t tried them before.

Time to Give is a wonderful opener and incredibly tight musical odyssey. Tell me more about how this song came to fruition and how it personally sits within the context of Five.
That song actually came together pretty late on in the process. We had a couple of days before I had to travel back to where I live in California, and this track came at the end of the very last session. It sounded very basic and we thought it was alright, but when we worked with Ed Buller in Los Angeles he saw so much more in that song. He helped us expand is, in particular with the riff at the end that keeps getting bigger and bigger. We eventually knew that it could be one of the standout songs on Five, and it’s honestly one of the finest things we’ve ever done. Someone described Time To Give as a snowball falling down a hill, which I think is so true. It’s a dream come true to hear a seven minute long track being played on the radio, too. We chose to release it first as it was a great example of what to expect, as it isn’t in any way similar to what we’ve done before. We were very proud of that song, but also apprehensive, so we’re thrilled with how the public reaction went down. It’s a standout moment for us.

And what a moment it is. Thanks for your time. Five is out now via PIAS.