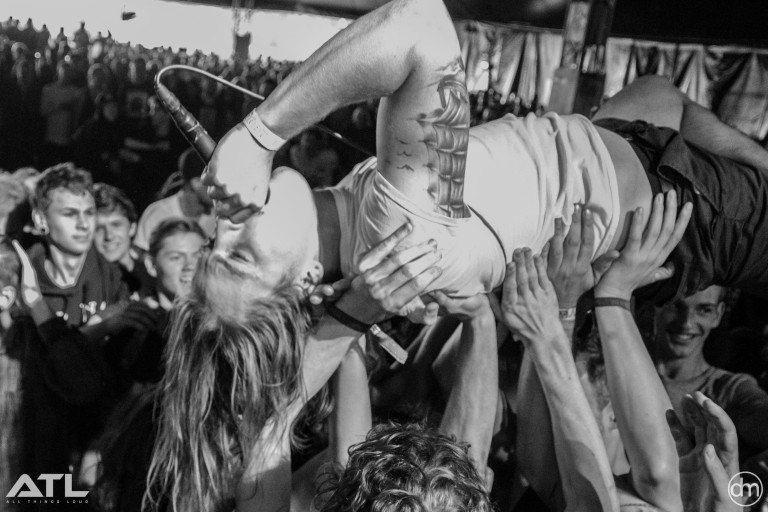 Why We’re All Going to Miss John Coffey

On Friday, Dutch hardcore outfit John Coffey will bid the world farewell during a sold out night at Amsterdam’s legendary Paradiso. The band’s short-lived history has seen them go from underground brain rattlers to stadium-sized hard rock behemoths, a status which was in part determined thanks to last summer’s famous beer catching clip. Since then, the band (fronted by David Achter de Molen and completed by Alfred and Richard van Luttikhuizen, Christoffer van Teijingen and Carsten Brunsveld) have seen their popularity skyrocket to a point where you’d almost be concerned for a case of John Coffey overkill. Having been able to tick off almost everything from their bucket list, Achter de Molen and co. are calling it quits for the time being. Here’s why we’re going to miss their presence.

THEIR DESTRUCTIVE LIVE SHOW IS UNRIVALLED
The band may have toured relentlessly, but each and every show carried with itself a brand new sense of character which was unrivalled in the hardcore scene. Whether it be a festival main stage or underground bar, you’d always be sure of the fact that Achter de Molen and his band would tear the place apart. No venue was too big or small for the band, and no crowd was too sparse or dense. From the likes of Lowlands’ packed Bravo tent last month to half-full festival fields in Eastern Europe, John Coffey knew how to rock a crowd and leave them with a sense of longing that not many other bands are capable of. YOU NEVER KNEW WHAT WAS GOING TO HAPPEN NEXT
If you thought that John Coffey were a predictable band then most people would probably laugh at you. Quite rightly so, because every avenue the band approached seemed to be completely different to the one before it. Alongside a multitude of regular clubs shows and festival appearances, the band always had a trick or two up their sleeve. This year’s massive homecoming show and the subsequent Tony Hawk Pro Skater soundtrack shows (during which the band covered the game’s whole soundtrack in a skate park) were events which no other band in their position could put on, and there was eventually not much new for them to explore. They could have gone for the heights of the Heineken Music Hall and sold it out, but instead they decided to trek through the length and breadth of Holland to play some farewell shows which stuck right to the essence of what the band were all about – total carnage and intimacy.

THE BAND HAD A WAY WITH WORDS
Earlier this year, the band put out the politically-charged A House for Thee EP, which challenged topics in relation to refugees, the education system and poverty. Title track No House For Thee was paired with a destructively emotive video, whilst the manic Nails on the Blackboard bemoaned the education system in a way which only John Coffey could do – by means of harsh guitars, manic percussion and frenetic rhythms.

THEY STOOD FOR SOMETHING
John Coffey were a voice for those who needed one. They were a band who, however clichéd it sounds, gave people something to strive for and look forward to. By releasing tracks which were as fun and brash as they were socially conscious, they enabled people to form their own ideals and have their own voice whilst still going all out on the musical front. John Coffey are the kind of band who can evoke a multitude of feelings and emotions all at once. Not many bands truly stand for something in this day and age, meaning that it will be a shame for as long as the gap that John Coffey leave remains vacant. THEY WERE ONE OF A KIND
Although the reasons behind their “indefinite hiatus” are certainly understandable, it will be a disappointment for the many people who saw John Coffey as Dutch heavy music’s last hope. Guitar-based music in Holland has, with the exception of a few up-and-comers (see: Death Alley), always been rather stagnant and in fear of not progressing. John Coffey were always that one band who stood out from the rest, bringing four brutal riffs for each Kensington chorus and destroying twice as many crowds as your average Chef’Special or Handsome Poets. Although there’s no comparing these bands musically, you can’t deny that John Coffey were a unique beast with their own set of qualities.

John Coffey, you will be missed.