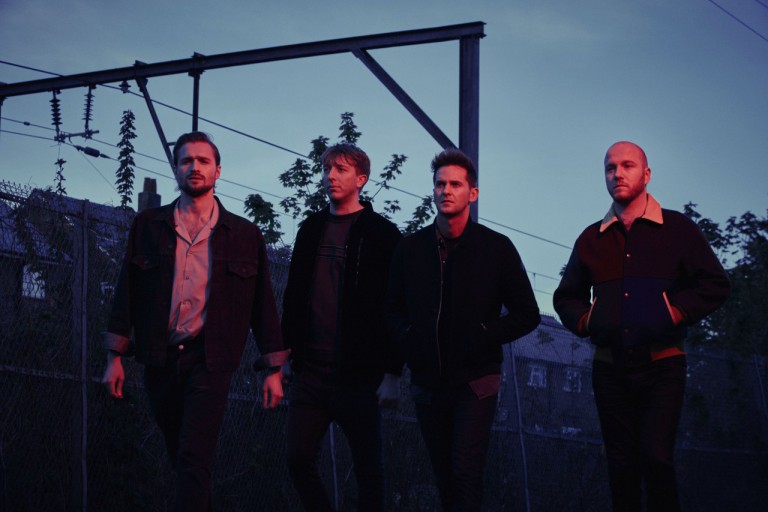 Wild Beasts: “Making a record is a stunt”

At the end of this week (5 August), Wild Beasts will put out their long-awaited new record Boy King. The album, produced by John Congleton, sees the quartet open up and look outwards in flamboyant fashion, as opposed to 2014’s introspective and dark LP Present Tense. We met up with band members Tom Fleming and Hayden Thorpe to discuss the album’s conception, their future plans and why they made a conscious step into new sonic territory.

You’ve just announced your new record, Boy King. Can you tell us a bit more about the recording process, and how the album came to be what it is now?
Wild Beasts: We spent about a year writing in a studio-cum-rehearsal room in London. Studio is probably a bit grandiose, but we were basically just writing/rewriting songs, programming and working on different guitar sounds. In the autumn, we went to Dallas to record with John Congleton with what could’ve been a full album worth of songs. We broke it all down, simplified it and basically made it much dumber, much simpler. We ended up recording it in less than two weeks.

What kind of things did you draw from for both musical and lyrical inspiration?
Wild Beasts: Musically speaking, you can tell that there’s more rock influences. There’s almost some hair metal bits on the record, and they’ve then been put up against slinkier, almost Prince-like basslines. There are also some processed vocals and programmed drums, and that’s sort of the sound of the record. Lyrically, it’s the same old self-loathing anger, frustration and self-hatred – all the kind of good stuff. It’s all of the regular Wild Beasts tropes, just on a grander scale.

The record definitely sounds like a Wild Beasts album, yet at the same time it sounds like something completely different. Was this a conscious decision?
Wild Beasts: It’s a very conscious thing. We realized that we actually had the opportunity to do something quite spectacular and unlikely, and that in itself is quite a privileged position to be in. We had the chance to do something which was completely off the wall and then get away with it. If you have that licence, then you should use it.

You worked with John Congleton on Boy King. What did he bring to the table?
Wild Beasts: A lot of what John did was psychological. A drill sergeant is too strong a term to use, so I’d say that he was more like a coach. He got us to work quickly and do very few takes whilst also taking lots of things out of songs and making us do weird stuff. Playing-wise, that is. He showed us his experience; he’s done a lot of different work in a lot of different genres. Everything from heavy metal to crisp pop, it shows. He has a great, up-and-running sound ready within fifteen minutes.

Does he bring elements of both the metal as well as the crisp pop to the table?
Wild Beasts: What he does is let it be what it’s got to be, and then he encourages you to just do it. It’s all about doing, which is pretty cool for some British chin strokers like us. The greatest thing I could say about him is that he’s almost an un-producer; he would make things regress backwards. Like, “don’t overthink this, you were there at that point and you’ve taken it too far”. Often, what we made with John was sloppier and rawer than what we would originally like to reveal. We eventually realized that that was where the power was.

You previously claimed that the album needed an element of “what the fuck?” Did you achieve that?
Wild Beasts: I think so. I was satisfied, and I’ve also surprised myself. At times I was a bit nauseous and anxious about how it was going to sound, but that’s the right feeling; that feeling of danger, of potential implosion. That’s how it should be – making a record is a stunt, and you’ve spent ages making sure that it goes perfectly. You either jump through the fire, or you fall in it and become incinerated.

What would you say was the most important lesson you learnt while working on Boy King?
Wild Beasts: We learnt to simplify, and also to just do rather than think. It’s a musical version of “it’s always better to apologize and ask permission”, do you know what I mean? That’s basically what we were doing: just do it, and worry about it later. John essentially said that we were good, but to just “fucking do it”. That’s what we needed when capturing the spark, I think; just to be spontaneous.

The record comes out on 5 August, but do you have any idea which direction you want to head in for future work?
Wild Beasts: I don’t know. I mean, Boy King has been really good for us and it’s a more forthright sound. It’s very hard to say, because I think that there’s a difference between all our records, yet something still remains the same. I think we’ve hit something good now. I’m not trying to dodge the question, it’s just really hard to say. We’re so “in” this one.

Will you be introducing anything new to the live show on your upcoming tours? You’re slowly getting bigger, and you’re even headlining festivals in some territories.
Wild Beasts: I think we all feel that we should take the live show to the gym a bit and fill it out. It has to be muscular, and we have to be “in” it. This record is all about being in it, and being that guy. We’ve created a safe zone where you can be that guy, and it’s absurd. We’re wielding these heavy metal guitars and making gestures and shapes which are so wrong that they’re so right.

Boy King comes out on Friday 5 August via Domino Recordings.