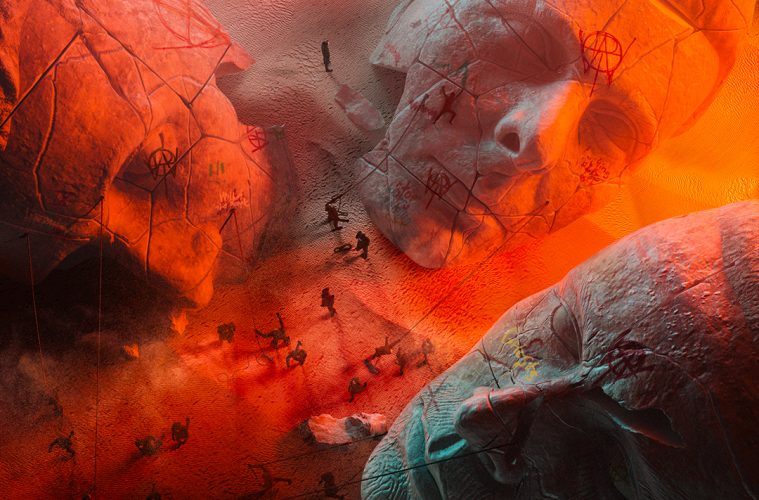 WILL OF THE PEOPLE: Muse Have Never Sounded So Much Like Themselves

When big bands get to the end of a record deal, it’s almost a given that they’ll consider dropping a greatest hits collection so they can just be done with their contract and move on. That’s unless your name is Muse, though. The iconic British rock trio were presented with the option of doing a greatest hits record by their label, Warner, but instead refused and chose to write an album which combined all the best sounds from across their 25 year plus career. The result? Will of the People, an album which sounds like Muse digging back into their roots and playing with the same sonic elements which made them the much-loved band they are today. A greatest hits without the hits, basically.

Title track Will of the People raises the bar high with its Beautiful People-esque rhythms and prowess, employing radio-friendly vocals and catchy guitar lines to produce a song which is equal parts rugged as it is catchy. “Welcome to the desecration, baby” sings frontman Matt Bellamy as he sets the lyrical tone for the next forty minutes. Will of the People is a protest album at heart, its lyrics touching on topics which Muse have always tackled best: dystopia, overthrowing authoritarian regimes, and defiance. While the opening track is a straightforward alt rock banger, previous single Compliance chooses to operate on a synth wave level. Muse have done mid-tempo synth rock well in the past, and Compliance is no different. It features all the traits of a great Muse song, complete with lyrics about falling in line with authority and complying.

The bombastic Liberation will undoubtedly draw plenty of comparisons to Queen, but over the years Muse have become so good at employing this sonic grandiosity that comparisons to Freddie and co. ought to be obsolete. “Thank you for playing your part in our liberation” sings Bellamy over a lilting acoustic guitar, which is flanked by sprawling piano lines and sickly sweet backing vocals. Liberation’s dissonant piano outro makes way for Will of the People’s lead single, the brutal Won’t Stand Down. Despite bordering on Imagine Dragons-esque pop in the verses, its chorus is Muse at their monstrous best. Chugged guitars, guttural screams and menacing synths, Won’t Stand Down is one of the best songs Muse have churned out in years. The breakdown is Muse at their heaviest to date, touching on metalcore in no part thanks to bassist Chris Wolstenholme’s vicious screams.

The go-to ballad on this Muse album is the piano-driven Ghosts (How Can I Move On). It’s rare to hear Bellamy in such a stripped back setting, but the song’s minimal piano backing serves as a powerful accompaniment to the song’s emotional lyrics. “How can I move on when everyone seems to talk about you?” asks Bellamy, the upset in his voice palpable. It’s not Muse’s strongest ballad, but it definitely strikes a chord. New single You Make Me Feel Like It’s Halloween is the closest Muse get to recreating the sound of 2018’s Simulation Theory. This is also the closest Muse get to recreating 1980s rock on this album, with the organ-like synths, multi-layered vocals and high pitched guitar solos allowing the track to slot in nicely alongside past day counterparts like the Ghostbusters theme and Rockwell’s Somebody’s Watching Me. And that’s a compliment. On the other side of the coin we have Kill or Be Killed, which is the heaviest song Muse have written in years. Effects-laden guitar, pounding drums (courtesy of Dom Howards) and an enormous chorus all combine to create one hell of a track. If you’d have told anyone that Kill or Be Killed came out in 2003, they’d probably believe you. Verona is the first instance on Will of the People that we hear Muse re-employ arpeggios to the best of their ability, and they serve as the foundation for one of the album’s highlights. “Can we kiss with poisoned lips?” asks Bellamy over a mix of pulsating synths, ethereal soundscapes and The Edge-lite guitar lines. At five minutes, it’s the joint longest song on the album, and it uses each second to good effect. It’s sure to be a fan favourite.

Penultimate track Euphoria perhaps best sums up Will of the People‘s qualities best. Not only is it one of the strongest tracks on the album, but it is also the song which best summarises all of the mental sounds Muse have approached over the years. There’s a highly catchy guitar line, urgent vocals and a pre-chorus which harks back to the band’s Absolution days. Hell, there’s even arpeggio-led synth lines which flicker in and out of consciousness throughout the track. Euphoria is the most Muse-sounding song you’re going to hear in years. The album comes to a close on We Are Fucking Fucked, the strongest song on the record along with Euphoria. It’s a straightforward construction – Matt, Dom and Chris in a room with no extras or bullshit. Just guitars, drums and bass. The track’s heavily distorted pre-chorus makes way for a brutal chant of “we are fucking fucked“, with each individual verse increasing in intensity as the song progresses. The song’s end allows the band to reach a whole new level of hard hitting intensity, eventually climaxing in a way only Muse know how. And that’s also what makes this album so fantastic – it’s Muse doing what they do best, without pandering to outside opinions. Muse are back, ladies and gentlemen. Will of the People is out Friday (26 August).