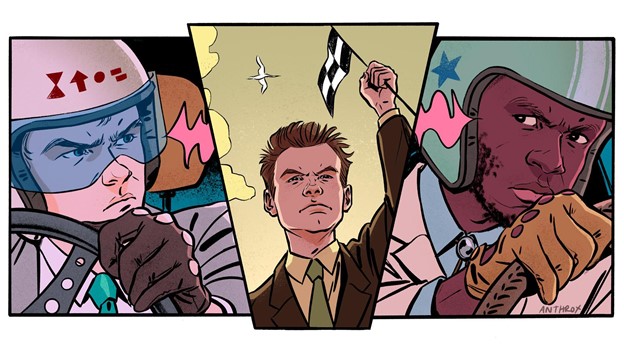 You’re probably here because you’ve been toying around with the new and enigmatic black midi website, trying to piece hints together and hoping for new music. Well, the wait is over but the mystery lingers. With the announcement of Cavalcade a new realm is explored, and in true black midi fashion it’s quite impossible yet extremely exciting to anticipate what sonic and lyrical experiments will be found on their second album. Ingrid Enache caught up with drummer Morgan and bassist Cameron to gather some hints, and also discuss playing the wok, TikTok and business.

Hey guys! Let’s do a quick introduction round. How would you describe the album with a colour, a smell and a taste?
Cameron: Navy blue and maybe a deep red. Smell and taste… something deep and rich, probably dark chocolate mousse.

Morgan: I’d go for a deep red and a turquoise. The smell of smoke after a recent fire. And the taste of apple crumble! The softness of the apple but the crunch of the crumble on top.

I’m hungry now, but let’s get into it – you started working on Cavalcade right after releasing Schlagenheim; how was it to jump straight into a new project? Did you get the chance to take a break?
M: It didn’t really feel like jumping straight into a new project. In the context of 2019 we were playing a lot of songs from the first record but also jammy versions of things that became songs on this one. We ended up playing some of those songs from the (new) record on the tour that we did in February last year. So it never really felt like a clear transition into a new realm until lockdown.

C: We started thinking of a new record and coming up with ideas after we came back from SXSW; we jammed in a room until we got kicked out for being too loud. Some of those ideas became a couple of the songs that we wrote later in the year. But the first time we spoke about making a new record was when we were in Japan in September 2019 – by then we had two new-ish songs that were John L and Chondromalacia Patella, which we then developed over the course of the year. But like Morgan said, a lot of the tracks ended up getting developed a lot more anyway, so we never finished writing once we made a record, we kinda just kept developing. When we played our last show at the Roundhouse in London we were speaking about who we wanted to produce it. But then lockdown gave us a forced change after touring non stop for a year and a half. We all wanted to be touring; we were going to Latin America where we’ve never been before so it would have been amazing. The silver lining was that it gave us time – we were all able to reassess what we wanted to do with our lives and with the music. It was a very introspective period for anyone that ended getting stuck at home.

So the decision to work with someone else instead of Dan Carey was a deliberate one? I was wondering if it happened spontaneously through meeting other producers or if it was a conscious choice.
M: It was pretty considerate. After we had the phase of introspection in lockdown, the material that came from that time lent itself to a different producer. We were thinking to look elsewhere anyway, but once we actually got in a room together the music spoke for itself and clearly brought a different approach. So we had a few sessions last summer and it was really interesting to be in a studio again after so long. We had a rough idea of what we wanted it to sound like, but of course you don’t know until you’re in the studio.

C: Since before Schlagenheim we’d always spoken about one thing – to always be moving forward and always change things. As much as it might seem a strange decision for other people that we didn’t keep working with Dan Carey after such a good first record, for us it would’ve been strange not to change, not to take the risk.

Speaking of changes, this time around you experiment a lot more instrumentally – you have violins, bouzoukis, a lap steel and a wok. One could say you’ve created an instrumental cavalcade; did you bring all of these ideas to the studio right away or was it a result of being separated in lockdown and experimenting on your own?
M: When we recorded some demos back in June, we had a rough template of what instruments were gonna be used. But when we were actually in a studio setting, where everything was around us – a really nice piano, an upright bass… just loads of things to experiment with. It was definitely different since the material was so new; we’d only played it a few times before we got in the studio, so there was way more scope for different sounds than what we were used to playing every night while touring.

C: We did the session with Marta Salogni first and then we spoke to John ‘Spud’ Murphy. What we liked so much about making the first record was that there were just a bunch of instruments in Dan’s studio, and so we wanted to carry on with that. So we asked John to bring what he could get, it didn’t matter what it was. And like Morgan said – the first record was toured a lot before recording, almost all the songs were written and developed live, whereas this one was only half tested live at a socially distanced show at the Windmill in London. We were a bit anxious before going to Ireland to record because we hadn’t had the chance to play a lot of these songs live. But that also meant there was no preconception of what the record should sound like.

You said earlier that you had quite an introspective period. I noticed this trend of bands going personal on their second albums, both lyrically and sonically. However, with you it seems like the opposite. You speak in third person, and present different narratives and exploded storylines. Was this a result of the current political, economical, cultural etc. state of the world?
C: Yeah in a way. I’ve never really been that interested in writing personally. I can’t speak for Geordie, but it’s always nice when you’re saying something personal to put it through an impersonal filter. For example the Speedway lyrics – it’s referencing a thing that’s really near to where I live, but it doesn’t have anything to do anything with my life. It’s interesting to give off a feeling without really saying too much, or in too many words. I don’t really know why all the lyrics are in third person but it’s helpful that it happened so that we can tie them together with an album title. Also if you spend too much time in lockdown thinking about yourself the last thing you wanna do is start singing about it.

You have all these very specific concepts which come together in your album titles – Schlagenheim & Cavalcade. The words themselves say a lot and have stories of their own, and then you add the musical layer on top of that. I know it’s very outdated to ask ‘what came first, the lyrics or the music?’ but I can’t help but wonder when and where these concepts come  in the creative process?
C: I think Geordie writes a lot of the lyrics before, but I just put words over the music.

M: This time around it was quite a last minute call in terms of finding a correct title that tied everything together. There was a lot of back and forth, but we definitely settled on something that felt totally right. It was important to find a title that could stand by itself, but that also made sense in an album context.

C: Because all of the songs sound quite different, the challenge was to find a way to describe that.

I guess it’s quite common for you to talk about your music making process, but I’m also very intrigued about the process of your inventive visual identity – everything from record sleeves, music videos and press shots. How do you go about this side of things?
M: With the actual cover itself, it felt very important to reflect the music.  When we started chatting to David Rudnick about ideas for it, he said he could visualise a lot of colour in comparison to Schlagenheim. So that was a big factor in the process. In terms of press shots and everything else, it’s just about having fun! I don’t think any of us find it that enjoyable to stand outside in front of a building for a photo. I struggle to believe that most people find that enjoyable. So we’re trying to do something that’s fun and looks cool. If it’s not enjoyable then what’s the point?

C: The thing with the previous press shots is that a lot of publications didn’t vibe with them, they just wouldn’t have it. They would take a live shot instead, but this time we had to play ball a bit and find some other funny press shots. It is what it is!

You’re very active on social media, and you just made a TikTok! It feels like a very personal approach, not as if you’re trying to put on a persona. So I’m wondering how your relationship is with it, both as a band and as individuals.
M: From the band front, it’s mostly about giving people information they need to know rather than trying to do the whole personality thing. It works for some people, but for us it didn’t feel natural.

C: I just thought that Instagram was a bit dead. I downloaded TikTok for myself just to see what it was, because all of the funny videos I was seeing were from TikTok! I kinda got addicted to it really quickly because of the algorithm. So I thought it would be good to do something with the band on it, but it took a while to figure out how to do it. Not too sure about it in the long term, but at the moment it’s an album promotion tool which I guess is useful. But we need to work out how to make it fun and not just another thing to point people towards another website. We’ll see if it works or not.

Rapid fire question, to go along the dramatic theme of Cavalcade – if you could soundtrack a film or a play, which one would it be?
M: West Side Story.

C: I reckon An Inspector Calls.

Which one of your songs could you write a novel about?
M: Ascending Forth.

C: Diamond Stuff is kinda based on a novel. John L could also make a funny book.

Special question for Geordie [Greep, the frontman who has just joined the interview] – let’s talk business. You’re always saying that ‘business is like a waltz’ and I agree. What would you invest in if you had all the time and money in the world?
Brick and coal. Nah, you invest in yourself, you don’t invest in anyone else! You just build your own company, straight up to the top. Straight up to the top – the perfect way to describe the work of black midi. Cavalcade is out 28 May.