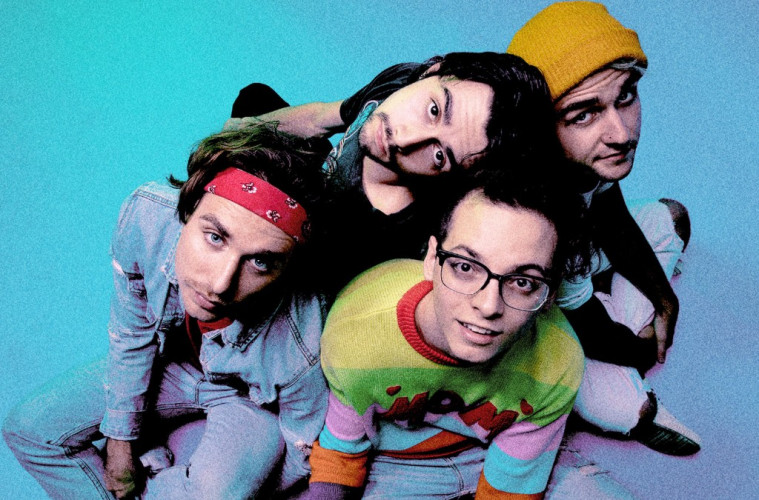 The Wrecks’ Infinitely Ordinary: The Stories Which Shaped The Album

Yesterday, American rockers The Wrecks released their long-awaited and punchy debut album Infinitely Ordinary. The record’s eight tracks are the result of four hard years of work from Nick Anderson and co., blending high octane indie with hints of pop punk, rave rock and radio ready anthems. Jack Parker called up frontman Anderson to talk about the album and the stories which shape it.

Hey Nick. Your debut album Infinitely Ordinary is out now, and it’s been a long time coming. How does it feel to finally have it out?
Reliving. It’s definitely relieved a lot of nerves and anxiety that we shared with our fans. Now we’re taking a deep breath and enjoying the milestone, a finish line that’s been crossed. We can now take steps forward as a band with an actual album out.

How has the response been for you so far?
The response has been above and beyond! I knew our fans would appreciate the album, but it’s reached more people than we thought it. We want people to be introduced to our band through this album; this is the music we would want people to hear, it’s a good showcase of who we are and what we do musically.

It must feel weird putting it out in the midst of a pandemic. Were you at all apprehensive about releasing it now, or perhaps delaying it?
Our fans have been waiting so long for this album, so not really. Our label and our management tossed around the idea of delaying it because we were going to tour it and sell the album on the road, but our fans have waited so long and it’s quite a special thing to be releasing this album at the moment, during an event where no one really knows what tomorrow looks like. It’s nice to put out something which people can look forward to during a crisis, and it’s special to know that people have something to count on.

It’s quite short for a debut. Why?
We only had eight songs out before the record, which was our two EPs combined. We’ve been a band since early 2016, and so it’s been four years of touring those eight songs. It felt odd to put out more music than we had out, so to have eight songs out and drop twelve would have been overwhelming and inconsistent with the past. We decided to not overwhelm people and just double our catalogue instead as we move into a release schedule which is a little quicker. We don’t have to wait so long between releases, and it allows the album to be digestible and concise.

The opening track – Freaking Out – sets the scene well. Tell me more about that track.
It’s a study of psychedelics, and an explanation of the trials and tribulations that come with tripping. Not just the anxieties and paranoia involved, but also the magical and blissful moments, the ups and down of psychedelics. The track has its own double meaning, it’s not just in your face about tripping. It can be seen as a wild night, but also just about finding hope in stressful situations. I love that it can be applied to a lot of different situations, but at the end of the day it’s a boisterous and exciting track which feels infinite in a way. It’s exciting and hopeful, whether that be a drug trip, going out with friends or just getting to the end of the tunnel.

Lyrically the album is very open and honest. Tell me a little bit more about the songs which had a big impact on you while writing.
I think that Feels So Nice is my favourite in terms of creating it. The verses in that song were fully improvised. I made a basic backing track, I had the instrumental down and I knew how I wanted it to feel, but I had no words or melodies. I hit record and sang the first things that came to mind and never re-recorded them. I’d start speaking gibberish, stop recording and then punch back in where I needed to. I did that for about three or four minutes, and then when the verses were done I took a look back at the lyrics. They weren’t what I’d usually write – they were far more poetic than what I’d usually write when I was focussed on writing. I wanted the lyrics to sound like they came from the tip of my tongue. Common People by Pulp was a big inspiration for the vocal approach on that song, the conversations in that song are very in the moment and immediate, and I wanted Feels So Nice to also sound immediate because that’s how I felt when I wrote it. I took my time with the chorus, but even those lyrics aren’t super groundbreaking or anything. I knew it had to be a bit simpler than the rest of the track, though.

The album sounds like the soundtrack of a wild house party, from the crazy highs to the sad lows. Was this intentional from the outset?
I never really approach songwriting from a conceptual point of view. Whenever I’m writing multiple songs each one always stands alone; there are no two same songs, no same tones, riffs or vocals. There’s a lot of different moments which all feel like they stand alone, and I kind of like that. It allows 23 minutes to feel much longer than it is, but it also doesn’t feel too short because every song is its own little vignette. I’ve always been a singles kind of person, I’ve always tried to write singles as opposed to one piece of music which blends together or has a same-y theme. That never really appealed to me. I know a lot of artists like concepts or themes, but for me music has always been song by song. I only like two or three songs by my favourite bands, and those are just songs I really love and have on repeat. I wanted to write a bunch of singles which would appeal to different people, so even if there’s just one or two tracks on the album which people like I hope that they’ll abuse them in their playlists.

There are a number of people who appear throughout the album either as a producer, collaborator or guest vocalist. Is this something you want to keep doing, just bringing in people to help aid the music?
I’m not naturally a collaborator, but I started writing and producing for other artists two years ago. In the last eighteen months or so it’s been my sole source of income, and it’s also become one of my favourite things to do. I’ve learnt to work well with others, find something special and pull from people’s strengths. I’ve learnt to work with people who have totally different musical backgrounds; some songs weren’t even originally meant for The Wrecks but just to see where we could get to. If I see someone really talented, I want to see what we can create. For example, We All Get Lonely was originally for Tomi. She initially sang the first verse, which eventually became the second verse. She got a text from her landlord that she had to leave, so I recorded the chorus and sent it to her while she was in her Uber back. I sang a falsetto, and I loved how her low timbre and my airy falsetto blended together and switched gender expectations for vocal tones. I pulled that song up four or five months later, switched the verses around and added some guitars to make it a Wrecks song. It was a really cool track to include.

I co-wrote Four with a guy from the UK called Henry Brill. He’s a poet at heart; I was able to do just the music, which is funny as lyrics are my favourite thing about music and something I’d never collaborate with other people on. He added such a special touch to the song, it was such a heartfelt kind of writing. Watching him write was so special. Usually I wouldn’t let someone else write, but I just couldn’t say no to a poet like him. I had to set that aside and learn to recognize when something really special was happening. Working with Henry was a treat and I hope to work with him again either for The Wrecks or something else. He’s a magician with words, he could write four different versions of the same verse in five minutes.

Now that the album is out there, it must feel like a huge weight off your shoulders. But what’s next for The Wrecks?
I guess a new record and doing interviews like this one. I hope we can reach more people overseas; we haven’t played outside of North America, so once touring picks up again I hope a band much bigger than us hears the record and wants to bring us out so that we can build our fanbase. It’d be a dream to fly over for a show, because for a band like us it doesn’t usually take this long to go overseas. The opportunity just never presented itself in a financially viable way. Infinitely Ordinary is out now.