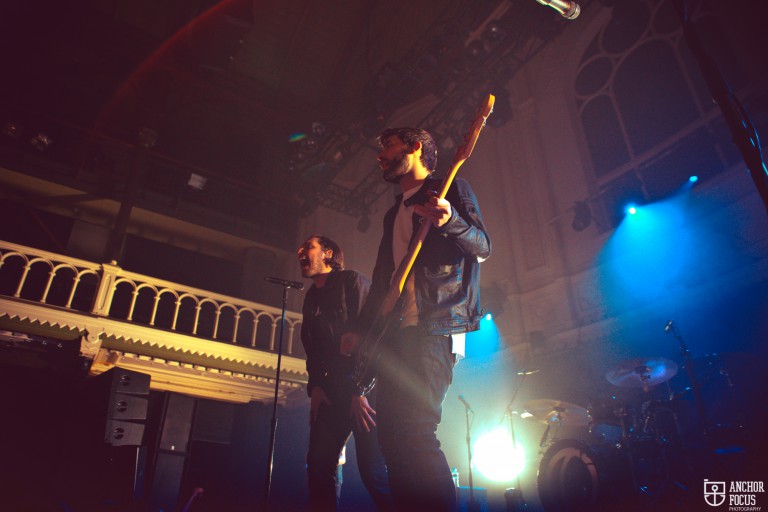 There was plenty of Room to Breathe in Amsterdam on Wednesday as You Me at Six performed in front of an unfortunately and disappointingly small crowd at the city’s legendary Paradiso. The venue, which holds 1500 people, played host to a sparse crowd of some 500 diehard fans who’d trekked from far and wide for the show. The small crowd and empty balconies definitely didn’t faze Josh Franceschi and co., who put on an arena-worthy show which drew heavily from new studio album Night People. Reading quartet The Amazons opened the night, with their infectiously radio-friendly indie rock echoing nicely through the venue as fans made their way in. The band have been around since 2014, but it’s only this year where they’re expected to finally make their big break. Their hotly anticipated debut album (self-titled) is due on the 2nd of June which, all things considered, is a perfect warm-up for the busy summer season this four-piece can expect. Their Paradiso set featured cuts from said album, with popular radio singles Black Magic and In My Mind receiving positive reactions from the crowd. Whether or not they’ll be able to fill up rooms of this stature in the future remains to be seen, however the chances are high. The Amazons shouldn’t be underestimated one bit. You Me at Six took to the stage some thirty minutes later, with any hope of a larger crowd slowly dwindling as Franceschi and his four bandmates emerged. As the lights blacked out, Twenty One Pilots’ Stressed Out blared out over the speakers as dark red spotlights burst into consciousness. The quintet kicked off their 90-minute long set with the anthemic Night People, its grisly riffs echoing in and out of consciousness alongside a pulsating rhythmic stamp courtesy of bassist Matt Barnes and drummer Dan Flint. The menacingly destructive older cut Underdog followed, receiving an extra boost within the live context as it incited the first large (for Paradiso’s standards) pit of the night. Not that Night People, their latest creation, is something made for starting pits though; rather, it’s a record which allows fans to raise their fists in the air in and amongst the album’s Nashville sheen. Fellow old cut Loverboy produced similar results, with the band slowly but surely working their way into a night which exceeded the low standards fans had set following a disappointing European run last year. Franceschi had little vocal trouble this time round, sounding as strong as ever in his seemingly effortless delivery. Franceschi didn’t just bring tight vocals to the table though, with the frontman also posing as wingman and security guard at different intervals throughout the night. His role as wingman surfaced first, having invited fan Marco Schouten onstage to propose to his other half, Chantal Kwant. The 26 year-old got down on one knee as he declared his love for Kwant, before the band pulled off No One Does it Better to mark the charming occasion. His role as security guard came a couple of tracks later when he instructed security on how to best deal with crowdsurfers, blasting their unsafe way of working to much cheer from the crowd. His whole aura as a frontman is one seldom seen in alternative music today, something which is particularly the case when you consider how many vocalists attempt to imitate one another. Franceschi doesn’t need this; in fact, all he needs is to keep delivering his vocal A-game night after night so that You Me at Six achieve the major European breakthrough they’re seemingly still waiting for. Not that this lookback on last night’s Paradiso show should intend to focus solely on Franceschi’s role as a frontman, though – his band are just as tight and well-rounded. The aforementioned rhythm section of Flint and Barnes is complemented by guitarists Max Helyer and Chris Miller, whose guitar lines intertwine effortlessly regardless of if they’re upbeat and menacing (Bite My Tongue, Underdog and Night People) or slow and serene (Give, Take on the World). Although You Me at Six are great at both these things, it really is the middle ground between both styles on which they thrive. Whether it be the stadium-worthy Room to Breathe, anthemic Heavy Soul or catchy Reckless (which was interspersed with a hint of The Killers’ When You Were Young), the Weybridge outfit seem to have little difficulty in pulling a great collection of music out of the bag. Their Paradiso show was an absolute testament to that, balancing their heavier work well with newer, softer cuts and older fan favourites. The low turnout may have been disappointing, but the show certainly wasn’t. Night People is out now. You Me At Six will return to Holland in October for a show at the Dynamo in Eindhoven.