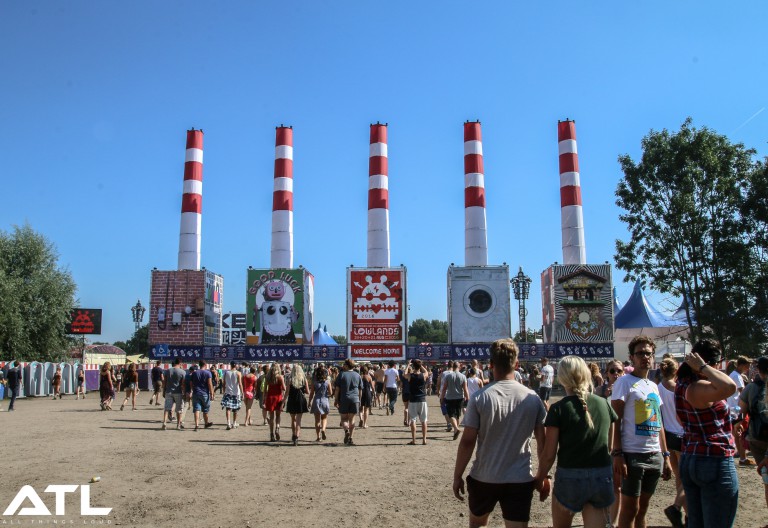 Your Definitive Guide to Lowlands 2017

With little under one month to go, the biggest date in Holland’s packed festival calendar only seems to be getting closer and closer. Yes, Lowlands Festival returns in mid-August for what promises to be an absolutely game-changing 25th anniversary edition. The road to 2017 hasn’t been an easy one, with recent editions falling foul to dwindling ticket sales and lacklustre line-ups that show little relevance to the modern day festival climate. That was then, though, and this is now, for Lowlands is now right back on top form as it gears up to celebrate its milestone in style. Not only are some of today’s biggest bands set to descend upon Biddinghuizen (amongst them Mumford & Sons and The xx), but the festival site is also receiving a full makeover in conjunction with its birthday. Gone is the gigantic Alpha tent’s structure, having been adapted to present festivalgoers with a stage half enclosed, and half out in the open (a rarity for the largely tent-based festival). It’s just one of the many changes (all of which you watch in the below video) which the festival has made in preparation for this year’s edition, one which we’re delving into with great detail to give you the definitive Lowlands 2017 preview.

Where do we start, though? At the top, obviously. Lowlands are no strangers to big names, generally pulling some of the biggest and most relevant names to Holland’s musical climate. Mumford & Sons are the big catch in 2017, making out part of a headline trio which also features Editors (somehow only huge in Holland and Belgium) and hype machine The xx. Other names high up on the bill include the soothing Alt-J, utter legendary Iggy Pop, Sean Paul and old school hip hop icons Cypress Hill. Together, they top a billing which has something for everyone, whether you’re into the whole heavy music scene, comedy shows or trance and house music. The former of these three artistic disciplines is well-represented in 2017, with Architects, Billy Talent and PVRIS just a small selection of alternative bands on show in Biddinghuizen next month. Whereas Architects will provide Lowlands with an absolutely destructive show, PVRIS look likely to set teenage girls’ hearts alight for the umpteenth time ahead of new album All We Know of Heaven, All We Need of Hell.

PVRIS frontwoman Lynn Gunn may well have the most encapsulating voice on the whole line-up this year, although it’s very hard to fully justify this when you look at the other big voices on this year’s billing. Just look at indie cult hero Car Seat Headrest (aka Will Toledo) as one example: he may not be a household name, but his voice will more likely than not remain embedded within your skull for weeks. Toledo’s new studio collection Teens of Denial is a list-topper the world over, largely down to his unique voice, which carries his heartfelt and brutally honest lyrics with utmost serenity. He’s not the only big voice on the line-up, though. Elbow frontman Guy Garvey is known for his soaring set of pipes, as is Future Islands’ manic mastermind Samuel T Herring. Both bands look set to pull off make or break sets in Biddinghuizen, either throwing away or cementing their popularity status on Dutch soils (something which Elbow have occasionally struggled with). All the aforementioned acts are just a small selection of this year’s tastemakers, i.e. the bands who people will (hopefully) still be talking about the following day when they recall the best big sets of the weekend.

It’s not just a festival for big names, though. On the contrary: Lowlands has often been a boundary-pusher when it comes to getting the best new music out there. Nothing But Thieves shone as one of the weekend’s best sets back in 2015, and this year they’ll return to preview new album Broken Machine in front of an even bigger crowd (and quite rightly so). For every success story like Thieves’, there are at least ten promising acts on the line-up who hope to make as big of an impact. Among the best small acts this year are Amsterdam psych-folkers Altın Gün, gender-bending lunatics HMLTD, scuzzy rockers YUNGBLUD, the unpredictably crazy Shame and Australian wonderkid Tash Sultana, whose ability to work her loop system into serene indie folk puts her in an absolutely unique position. Fierce trio Black Foxxes are also ones to watch, as are the in-your-face Culture Abuse and local prides Canshaker Pi and Iguana Death Cult. These bands are (once again) just a small selection of what this festival has to offer. Lowlands tends to be the kind of festival where you go home with dozens of new discoveries, as well as a potential new favourite band.

Beyond the guitars and bands, the festival also has plenty to offer in terms of electronica and a vibrant nightlife, the latter of which Lowlands has a good reputation for. Aussie producer Flume is the must-see DJ this year in our eyes, bringing his behemoth production to Holland yet again following a successfully sold-out show at the AFAS Live. He’s leading a pack of producers and DJs whose eye for exquisite production and a live show beyond the turntables gets bigger by the day. Drum and bass pioneers Black Sun Empire will undoubtedly cause absolute carnage, whereas Italian producer The Bloody Beetroots will combine his hyperactive blend of disco, EDM and trance to send Biddinghuizen into a sudden state of euphoria while the night is still young and drinks are still flying over the counter. Moderat will likely do the same, because that’s just how the Germans operate on a daily basis. Let’s not get started on Death Grips, because the chances of making it out of their set in one piece are practically zero.

As was mentioned before, Lowlands is good at pulling names who find themselves to be extremely relevant at that point in time. With that in mind, organizers MOJO has this year snagged viral rappers Migos, the boundary setting Tove Lo and punk rocker Frank Carter (plus his band The Rattlesnakes), the latter of whom has become the voice of a generation and absolute live force to be reckoned with. It’s acts like these (as well as a whole host of others – aforementioned punkers Billy Talent to name but one) who not only make Lowlands a hotbed of cultural politics, but also a festival which people will once again keep on returning to in the hopes of discovering far more of what’s relevant in today’s musical climate. If it’s good is par for the course (what constitutes ‘good’ anyway?), as long as its relevance enables Lowlands to remain equally vital to the Dutch festival landscape. The weekender seems to have overcome its rough patch of previous editions, now powering on into a new era by means of a 25th anniversary nothing short of spectacular. It may not have become a festival which the old guard still feel attracted to, but for as long as the Lowlands vibe lives on there’ll always be upwards of 50,000 revellers camping out in Biddinghuizen every August.

A Campingflight to Lowlands Paradise will celebrate its 25th anniversary from 18-20 August at the Walibi World events centre in Biddinghuizen, Holland. Next week Thursday (27 July), the festival will announce its timetable and unveil a brand new festival terrain. Click here for more information on everything else that the festival has to offer, including art, science and comedy/theatre. Lowlands 2017 is sold-out.