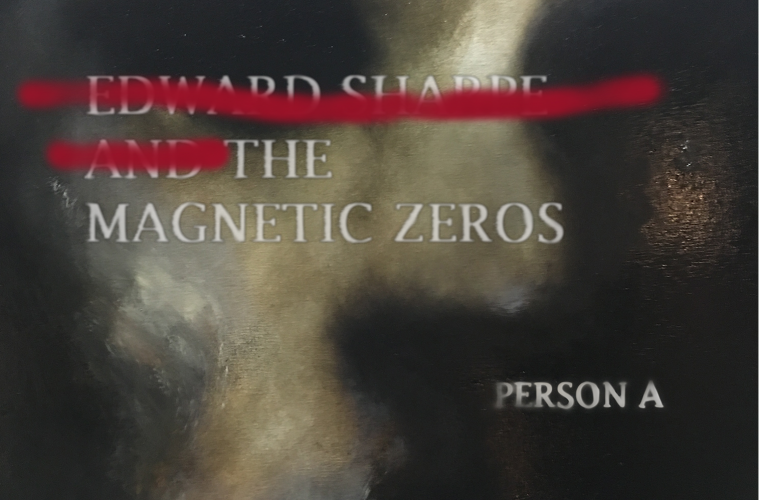 Edward Sharpe & the Magnetic Zero’s have been described as the main frontrunner in the modern day folk-pop revival, a comeback which first reared its head towards the tail-end of the noughties. New album PersonA sees frontman Alex Ebert attempt to evolve and revolutionize everything which stood firmly at the core of the band, with the words ‘Edward Sharpe and’ having also been crossed out on the album’s artwork. Is the record itself any good though? We took a listen to each track individually to see whether or not the album, recorded in New Orleans, really lived up to the expected standards.

HOT COALS
The record opens on Hot Coals’ finger-picked guitars, with frontman Ebert’s recognizable vocal line helping form the track’s backbone for some seven minutes. Slight hints of falsetto, vocal overdubs and lilting keys all appear throughout the hypnotic intro, before a rhythm section (courtesy of Seth Ford-Young, Josh Collazo and Orpheo McCord) enters the frame and helps spring the track to life. It’s definitely a long-winding intro, with the track taking quite some time to finally hit the right stop and find its place. A smooth, piano-led mid-section helps break up proceedings as its underpinned by ambient noises. The track eventually comes to an end by way of a slower acoustic build-up, which features a brass solo and the same ambient sounds that passed by earlier. It’s an ambitious opening track, but one which certainly sets the scene for the next nine songs.

UNCOMFORTABLE
Flittering electronics which sound like a futuristic helicopter flying through the sky kick off proceedings on the loosely-hanging and borderline-absurd Uncomfortable. “You’ve got to get uncomfortable” sings Ebert early on, with a free-flowing bassline eventually underpinning him alongside a more structured piano passage. At one point, it almost seems as if Ebert’s vocals are completely separate from the actual instrumentation, with the out-of-place timing and awkward sonic clashes eventually sounding like they don’t belong on this particular track. There’s a clear soul influence present, something which Ebert’s vocals demonstrate best. If the intention of Uncomfortable is to genuinely make you feel uncomfortable, then it’s done a good job.

SOMEWHERE
Somewhere sounds a bit more grounded than its predecessor, with light acoustic guitars accompanying Ebert’s storytelling vocals. “I believe we’re going somewhere” declares the frontman early on as the subtle background sounds increase in prominence. As the band boast ten members (who all recorded at the same time in the studio, instead of separately), different sounds and influences come at you from all directions and collide to form a beautiful musical soundscape which at times sounds out-of-place. Despite this, though, you can’t help but feel as though PersonA is an Alex Ebert solo record which mashes together his own thoughts and ideas. As the track heads towards an ending, a very sparse rhythm section consisting of bongos and handclaps takes the helm. Unfortunately, it does little to sound exciting and ends quite abruptly before it can really go anywhere.

NO LOVE LIKE YOURS
“Don’t know my attitude, don’t know a thing or two” sings Ebert on No Love Like Yours, which heads down an Americana path and doesn’t stray far from it. The track follows a similar formula throughout, with subtle guitars and pianos being accompanied by grandiose backing vocals and more hints of falsetto courtesy of Ebert. It’s one of the more well-structured tracks on PersonA, but it still feels as if something is missing.

WAKE UP THE SUN
At nearly seven minutes in length, Wake Up the Sun is one of more progressive tracks on PersonA. A jazzy piano line forms its backbone at the start, being accompanied by background ambience and Ebert’s indistinguishable falsetto throughout. “I’m tired of Buddha, so bored of Abraham” is one of the few lyrical sections which you can make out on the track, one which spends the most part of its long running length fading in and out of absurdly vague consciousness. To say that this track has little direction is an understatement, regardless of how diverse its musical palette may be at times. The second half of the track is far better than the first, introducing bombastic brass elements and a tension-inducing piano line which sounds messier by the bar. Once the distortion joins in, it becomes very clear that this track is working its way towards a monstrous finale. FREE STUFF
Free Stuff bears pulsating percussive hints from the off, further utilizing the occasional chopped up vocal and an emphasis on the use of organ-like synths. “Everybody’s stealing my home” declares Ebert at one point, slightly hinting towards his dissatisfaction at the way society operates in modern times. Who’s in control, perhaps? On PersonA it doesn’t seem like anyone is in control, with Ebert’s ego seeming to override his musical perception. As the brass re-enters the frame, everything once again borders on the absurd as vocal lines run through one another and a coherent form seems lost. The outro is very serene, though, making for a nice ending to the short track.

LET IT DOWN
It’s the same formula again, to be honest. A dark acoustic guitar tone increases in prominence alongside forceful piano lines, before a slower chorus borders on the anthemic. It’s the first hint of a ‘normal’ song on PersonA, because (and it’s a shame to admit it) Ebert seems to have let his own mind take over and inject vague absurdities into almost every song on the record. Singing of eggshells and platinum on Let it Down, it seems as though he’s even run out of things to say. The final part of the track is more urgent and upbeat, utilizing forceful rhythmic moments and a drawn-out wailed vocal which puts Ebert in an almost tribal position. “Run, run, run, run” he declares at its close, before everything falters and dies.

PERFECT TIME
A jazzy sax opens the track, with Ebert asking: “what is a cold-blooded madman to do?” Perfect Time is the slowest track on the record, demonstrating Ebert’s ability to hide his falsetto and make use of a deeper vocal tone. As the track progresses, more instruments enter the frame and actually enable the track to sound frankly quite beautiful. Lilting strings and brass help Perfect Time through the motions in a way which actually makes it the best track on the whole record. Ebert sings of “skipping, hugging, laughing, singing, dancing, romancing, spinning, and singing” towards the end, before asking God when the perfect time for love is. Absurdities aside, Perfect Time is a truly wonderful track.

LULLABY
Penultimate track Lullaby follows a similar format to Perfect Time, centring on a sole piano and Ebert’s deeper vocal tone. There’s hardly any outside interference from other instruments, save for some vocal lines, something which other tracks on the record unfortunately suffered from.

THE BALLAD OF YAYA
PersonA comes to a close on The Ballad of Yaya, instantly setting the tone with some brass and light acoustics. It sounds like one massive throwback to the 70s and 80s golden days, making use of showtune piano lines, upbeat brass lines and echoing choir vocals. It’s one of the better tracks on PersonA, sitting up there alongside Perfect Time. When all the musicians join forces it sounds like Edward Sharpe & the Magnetic Zero’s are once again unstoppable, an occurrence which PersonA very rarely presented the listener with. If there were more tracks like this on the record, then PersonA may have been more bearable and exciting at times. The track eventually comes to a grandiose end by means of increasing intensity and Ebert’s growing sense of self-awareness and fragility presenting themselves once more.

Who is PersonA? Does it refer to an unnamed Person A (formerly known as Edward Sharpe), is it Yaya, or does it allude to Alex Ebert’s altered persona and state of mind? Although the album does bear plenty of nice moments, it borders too much on the inaudible and absurd to remain remotely interesting for more than five minutes. Had Ebert stuck more to the formula which got him and his band recognition in the first place, PersonA may have been one of 2016’s best records. However, it doesn’t work that way and people like Ebert thrive on evolution and reinvention to keep themselves interested in their own output. And you have to respect Ebert for making this bold decision, even if it didn’t go down very well. It’s just a shame that it had to go down like this.

PersonA is out now. Stream it below.