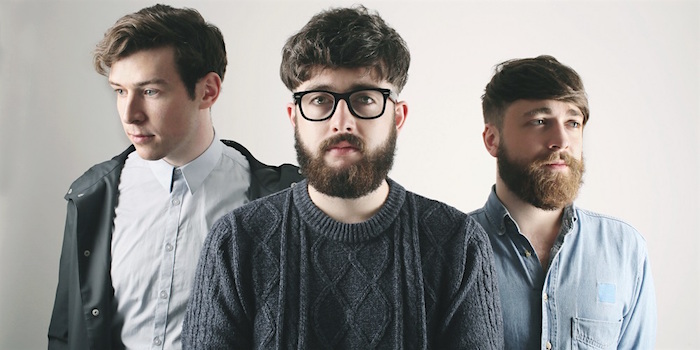 Fatherson: “Of all people, I fell in love with R Kelly”

Towards the end of February, Scottish trio Fatherson will take their explosive new album Open Book to the Melkweg in Amsterdam. We called up frontman Ross Leighton to discuss the album, his vocal influences and the direction in which Scotland’s musical landscape is currently heading.

Hi Ross. How are you doing?
Good thanks! Things are going well, and we’re preparing for the tour we have coming up. We’re going to places which we’ve never been to before, really looking forward to it.

You released Open Book last year. Can you tell me a bit more about the underlying ideas and processes behind the record?
Open Book came from a month or two of writing in Greg’s house in the summer of 2015. It was our first big release on the label which we’d signed to, and it enabled us to go to two studios in Glasgow which we really liked. We also got to see huge legacy studios like Rockfield, which is where we recorded most of the album. Coldplay and Oasis have recorded there, and Bohemian Rhapsody was recorded there too, just on an amazing farm in Wales. We spent over two weeks there recording it, and some other people worked on it with us. The album came along pretty nicely, and it’s a good snapshot of where we are as a band. The first record came off the back of two years of writing, and the one after that came quicker as we were writing all the way up till recording. Open Book was different, as it consisted of 3 months of writing and collecting songs before we were ready to go. We had pressure in a short time frame, which is good because sometimes you can milk it too much. You can write forever and decide when it’s finished, but we got together with Open Book and everything just fell into place.

And how have the last months been since its release?
Since Open Book came out we played a bunch of festivals, T in the Park being one of them. We also played the BBC Radio 1 Stage at Reading & Leeds. We’re kinda between the BBC and main stages of all festivals throughout the summer, and it’s just been an amazing experience. We played some release shows, amongst them our biggest headline shows ever. The biggest one we played was at the Barrowlands in Glasgow, and we were really fortunate to have that opportunity. We toured with a band called Augustines throughout the UK and Europe in October, and two weeks later Barrowlands sold out. It was an amazing two month stretch, especially as our biggest show ever sold out one month in advance! It was a very rewarding and relieving feeling to go from 800 people to 2,000 people. That was thus the big milestone of last year, and then we played the Edinburgh Hogmanay, which is a really big deal for Scottish bands. We played for 10,000 people, and that was also pretty amazing. Now we’re getting ready to go out on tour, but currently we’re just with our families before it becomes all guns blazing for 50 days from February onwards.

And have you at all thought about Open Book’s follow-up yet?
I think we’re conscious that we want to do something again. On the first album we were younger, and we spent two years with it. As soon as we finished Open Book we wanted to on for another album. There’s nothing on the horizon, and we’re about to embark on our first as a headliner since its release. We’re gonna give Open Book what it’s due. It’s good to always write, though; I write every day if I can and learn new things by watching bands and picking up the tricks of the trade. It’s always exciting to do new things and see how they work with the old stuff, and it’s a very exciting time to be in Fatherson right now. We’re still growing every day and making more music, it’s great.

So where does your lyrical influence come from?
I am a big fan of voice memos. If I didn’t have memos on my phone I would lose all my inspiration. I try to do 10 minutes of recording each day on the guitar or piano, and usually there will be something in there to get into the groove. Talking to people and listening to the way they use words really gets me going. The things that people say and their vernacular, they can mean something totally different. I’ve always got things that are occupying my mind even if they aren’t personal to me. I try to recreate that.

As a vocalist, who are your 3 biggest vocal influences and why?
Don’t laugh, ok? R Kelly wrote a 28-chapter opera 10 years ago, and you should really go watch it on YouTube; it’s amazing! I totally fell in love with the things he did and the weird way in which he sang. It really got me into the fancier vocal styles, almost gospel-like. It’s not evident in our music but it is present, and that definitely influenced me. I don’t understand how I came across it, but I’m glad I did. Of all people, I fell in love with R Kelly. Lyrically I also love Ray Lamontagne and Damien Rice. Rice is one of my biggest inspirations, alongside Jodi Mitchell. If you listen to their recording you can tangibly hear their hearts break, or what situation they’re in. You hear how they say a word in a particular way and you can immediately grasp what situation they’re in. That’s always something which I’ve been conscious of and tried to employ. That’s my big want, to try and look up at these people. Manchester Orchestra’s Andy Hull is like that too, but he has a bit more of a brasher rock influence. He bridges the gap between the styles which I love, combined with that fragility and power. So to sum up, that would be Damien Rice, R Kelly and Andy Hull.

What’s the live scene like back home in Scotland right now?
Edinburgh’s got a bunch of really good bands that are coming through. Since being in a band I’ve watched the best venues in Scotland open and close. Every six months there’s a new thing that happens. Three years ago it was quite folky, and after that stuff like Biffy Clyro, Twin Atlantic and CHVRCHES happened. Franz Ferdinand then came back with an album, with bled into bands like Baby Strange. They’re more new wave, though. We sort of plonker in between that stuff. It definitely isn’t a boring place to be, because there are so many talented and original people around. The figureheads like Biffy Clyro, Travis, Paolo Nutini and CHVRCHES are currently at the top of this whole thing, and other bands are branching off of that.

You’re appearing at the Melkweg soon. What can we expect from a live perspective?
It happens in a way that isn’t very planned out. We sing, but we also have everyone become a part of a show from the moment that it starts. Everybody says that, but it’s true. We get to go round and play music to people, so every show is someone’s night out. Someone has bothered to carve an evening out of their lives to spend an evening with you, so it’s very important to be audience-focussed and play the show well. The interaction is vital, and I look forward to having our own show. The set we’ve got is mixed, and I can’t wait. I like to do the big rock stuff and also keep the intimacy. I think it’s gonna be fun! You’ve got to make people feel things, and the show is just going to be a wall of sound and emotion.

Thanks for your time!
Cheers!

Open Book is out now. Catch Fatherson at the Melkweg in Amsterdam on 27 February.