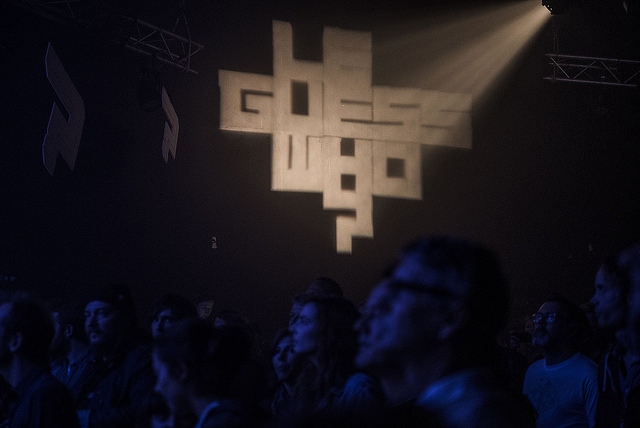 We sent music lothario Richard James Foster to the annual Le Guess Who? Festival in Utrecht to sample the musical delights that the four-day festival had to offer. See below his final  contribution, which outlines the closing day of the festival.

It’s misty, the weather lending a slightly mysterious air. We take a walk through the quiet streets of Utrecht. I’m not a huge fan of this city but I will say it is very beautiful on a day like this. We pass Julia Holter, wrapped in what seems to be a thousand scarves taking in the atmosphere and doubtless thinking of Aeschylus or some such. Holter’s curating and (like Ben from Suuns) turns up to support her shows, one of which is the one we’re heading to, Josephine Foster at Leeuwenbergh. Foster, in front of a full crowd and looking like she’s stepped out of a 30’s photograph, plays a haunting set that feels like it’s been crafted in a place far away from the concerns of the everyday world. Only a guitar backs her. A dutiful and sensitive audience dreams along. Foster’s music consumes all of your energy, as you get pulled into another timezone. It’s quite magical and one of those gigs that gives you an enormous appetite.You could also weigh the knitwear by the hundredweight in here. We shoot off through the city, dodging the Sint Nicklaus crowds to catch some of Quilt, but then end up in the Irish pub for a pint. Sorry. Guinness was needed after La Foster. We do get to EKKO eventually, to watch Amber Arcades put on the best show we’ve seen the band do. Band leader Annelotte de Graaf has come a long way this last 18 months or so, and justified her decision to back her muse, which, at some point last spring, must have felt nothing short of terrifying. After all that work, and scheming, Amber Arcades are now a tough band with damned good songs, hardened into something special by being on the road. It’s really the only way to learn. Always a chirpy type, de Graaf’s stage patter is engaging but to the point, the set list strong and well balanced, and the mix sounds good and well thought out. Even better, they keep chucking out their classic pop tunes, one after another. Guitar lines in the style of Maurice Deebank do battle with widescreen 90’s alternative guitar pop. But despite the fact that there are a lot of things you can pick up in Amber Arcades’ reassuringly classic pop music, there is something indisputably their own. Their take on Nick Drake’s Which Will is a brilliant appropriation and a real marker of a band that could do great things. And – best, maybe most predictably of all – they leave their weakest song on their new record (Turning Light, no, sorry it is) until last, to do what that groove does best; that is, wig out and get louder and louder, the spaces in the track allowing the guitar swells and drum surges to overwhelm. A very fine gig indeed. We shoot off back to Vredenburg to see Anna von Hausswolff take the roof off Cloud Nine. The band are playing their last show. They look moody and up for it. Anna (as ever, charm itself) tells the audience after two brilliant dark folk dirges (both of which coming on like an alternative soundtrack to the horror film, Sauna) that they will play only three songs. So in effect we are about to hear the last one. What unfurls is a slowly building assault on the senses that straddles itself between T-Dream’s Alpha Centauri, Pawn Hearts by VDG Generator and a Skando take on the sort of squat-noise rock (Gnod, take a bow) that has been finding its feet this last decade. By the end of the 20 minute maelstrom, it feels like every firework in the building has been set off. Deafened, we thought we’d take five before we went to catch Swans, only to half patronisingly decide to look at Patty Waters (she of ESP-Disk fame) in the main hall. Yeah man, ESK-Disk was cool, why not? That’s it we’re going home. NOTHING will beat this. Patty Waters’ show is the hidden gem of the festival. Her voice has adapted to the art of the possible these days, but her innovative timing, and her wild but on-the-nail phrasing, and the way she squeezes every last drop of feeling out of the words, is unmatched. This is the sort of thing beyond music as we know it. We walk in half way through Strange Fruit, it’s incredible. Waters’s band (with the irreproachable Burton Greene still on piano, Tjitze Vogel on bass and Barry Altschul on drums) are incredible too, setting up the this beautifully gentle, experimental vibe throughout. Some of Burton Greene’s compositions get a run through too, and they purr like an old Mercedes. Just to top things, the band’s incredibly evocative take on Wild is the Wind (with Waters exploring every nuance of the world ‘wild’), is unbelievable. My head feels like it’s coming off. Dig that old school cool mixed with the autumn leaf beauty of Waters’ voice. Mein Gott. OK now for Swans. Guess what; they are brilliant too. I mean I wouldn’t expect anything less. Neither would anyone else as the Ronda is packed, and everyone pretty much knows what they are about to receive (and thankful for it). Michael Gira’s apocalyptic, essentially Gothicke vision seems more appropriate than ever. He rallies his troops. Guitarist Norman Westberg makes noises that sound like a jet taking off. The sheer sense of physicality that this band can summon up is unmatched. Other bands have to turn things up. This band channel noise from deep reserve of their collective soul. Watching them is like standing in a blast furnace. Some middle aged groovers start bouncing up and down on the spot. People stand, stupefied and take in 15 minutes and leave, shaking the loose wax out, only to come back for more. What now? Well we catch Pauline Oliveros for a while, which is cool and immediately soothing, but after Swans we aren’t feeling that sonically aware. Excuse the crap pun… Coming round a bit we find ourselves deciding to watch Tortoise before watching Suuns. But, what’s this? Have we stumbled on a crowd scene re-enacting a warehouse rave from 1987? The predominantly young crowd are going APESHIT to a bunch of middle aged post-rockers. Is this where the scene is at? A guy is so out of it he collapses next to us mid-dance, and gets dragged out by his girlfriend. In front of us there’s a dude who has obviously had the bad smartie in the tube and is working through each e number to the ridiculously communal drumming work outs, the wry, ever-so-jazz guitar and keyboard runs, and the bubbling submarine bass parts played by the leviathan Doug McCombs, whose beard gives him the air of Otto von Bismarck. It’s an utter scream, this gig, and we really don’t know where to put ourselves. Suuns next. I was very disappointed with them at Welcome To the Village where they played a muted set shorn of all the power and grace they normally display live. I needn’t have worried. The band were up for it, playing all their great new songs off Hold/Still and their big crowd faves, like a burning take on the evergreen Gaze. What with Ben Shemie’s mysterious vox and a thumping electronic beat, they don’t half remind me of New Order in their pomp. Brian Case jumps on stage to give extra noise where needed. Will from The Skinny stands next to me and whispers “they’re really like Clinic aren’t they?” He’s nailed it. Clinic with a big beat. After Suuns pummel us, only to lift us up again and again, we are whacked and just about manage to take in Alessandro Cortini’s amazing analogue music before finding ourselves in disreputable company and somehow clinging on to the last train out of Utrecht. Le Guess Who?, you’ve been a trip most immaculate. That’s all for Richard’s Le Guess Who? adventures in 2016. All pictures are courtesy of Le Guess Who?’s Flickr page.