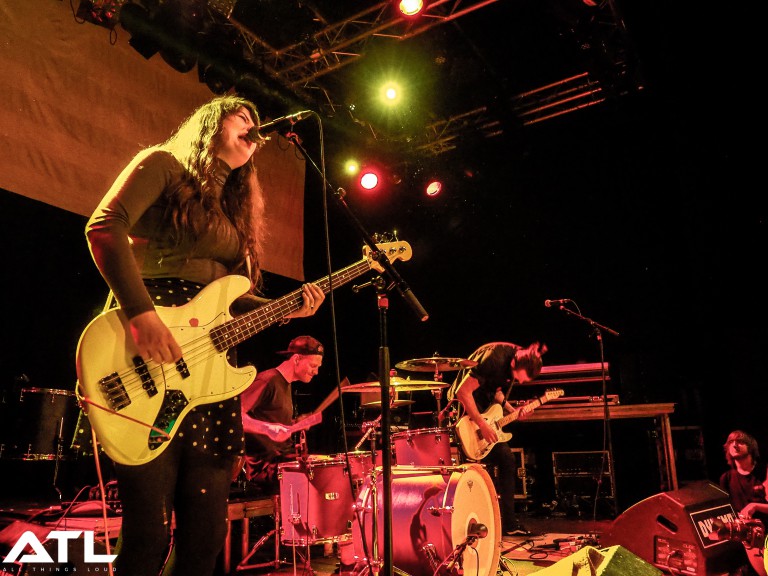 Muncie Girls Talk Us Through Their Debut Album

Muncie Girls recently put out one of 2016’s finest pop-punk albums. A couple of weeks back, we sat down with Lande Hekt (vocals/bass), Dean McMullen (guitar) and Luke Ellis (drums) in Eindhoven as they talked us through debut album From Caplan to Belsize in full. Read on to see what each member had to say about their debut album.

LEARN IN SCHOOL
Lande: Learn in School kicks in pretty heftily. We didn’t do the thing where people have intro’s for an album or something, which is a bit weird. It seems to work, though, I think. The theme of that song is in the title, and it’s about how you’re not really taught politics in school, and how that affects your knowledge and own personal power to vote and stuff. It’s kinda just like a socialist song.

Dean: It was one of the later songs that we wrote for the album, probably the second from last one. We’d been writing the album for quite a long time, so for the last few songs we were thinking, “oh god, we’re recording it in like a week or something”. The last few songs were thus a bit last-minute, and this was one of them. Around the same time, we wrote Gas Mark 4 and I always see those two songs as being quite together on the album, even though they’re separate songs.

Luke: It’s the most dance-y sounding on the album, and it’s got a groove to it. All of the other songs are pretty straight. It’s one of the most fun songs for me to play.

Lande: One thing I find when we play that song live is that there’s no break between singing, so there’s no rocking out bit at all. It goes from verse to chorus to verse to chorus to bridge to another chorus, and there’s no breaks in it whatsoever. It’s quite reflective of the lyrics in a way, because it’s sure of itself I guess. That’s why we put it at the start, because it’s a bit unapologetic. It’s quite a powerful song compared to some of them.

GONE WITH THE WIND
Lande: Then there’s the second song, which is Gone With the Wind.

Dean: Yeah, it was the first single which we released. It’s also the first video we did as well.

Lande: It’s the only song on the whole record that we did a 7” release for. We did a split release with this band from Munich called Sandlotkids, so at the time we thought that it was the best song because we put it out as the single. I still think it might be the best song because it’s really catchy.

Lande: Yeah, it’s got a good energy. It’s not really about anything in particular, but I kinda wrote it in the mindset that maybe it’s targeted at young-ish girls. There’s a lyric about “cutting my hair”, which is typically a nod towards girls. It’s about not being sure of yourself, which is a contrast to the first song.

Lande: It’s so not my favourite song, Respect. I got really bored of it really quickly.

Lande: I just think it’s a bit of a block of sound, do you know what I mean?

Lande: That song is about lad culture, and sort of slagging it off. It’s the only song on the album that has talking in it. The bridge has this really corny spoken word bit which is really distorted, and the idea is that it’s a solid piece of text on what lad culture means. It then goes into how rape culture affects young people, but because the verse gets quieter and louder for just that little bit there’s some bits where you can’t hear what’s being said. It’s representative of how, when people try and speak out about it in real life, you can’t be heard. It’s a nod towards that, but I don’t think anyone has gotten it yet. They might think it sounds weird, but it does sound weird. It’s little thing which we experimented with afterwards.

Luke Yeah. This is one of the few songs on the album that’s a bit different to ones we’d done before. I think that Balloon is one of the songs where we’d just changed it up. We didn’t change it massively, but it does have a different feel to it.

Dean: Yeah, the first three songs have a similar vibe to them and then it goes into a different vibe with Balloon and Social Side. Those two, and Nervous, all go together in my mind. The album goes through different vibes.

Lande: It’s basically the beginning of the next section on the album. It’s the first song that’s a little bit sorrowful, and it has sadder lyrical content. The other songs are based on negative subjects, but Balloon is a little more despairing. It feels like it drags on a little bit more when it’s in the context of the whole record and our other songs. When it comes in it feels quite slow, and we also use a chorus pedal on it.

Dean: I had to buy two new pedals for that song! It was worth it.

Lande: And, may I point out, the song before that (Respect) modulates into Mixolydian mode, just like the outro for Balloon. They do actually flow together in that way.

SOCIAL SIDE
Dean: Social Side has a completely different vibe. It’s as different as it gets on the album.

Luke: It’s literally just two tracks on a baritone guitar and then a drum loop playing the same beat.

Lande: And the baritone guitar has a really heavy chorus pedal on it, too. The vocals are dry, but they’re layered up three times. It was pretty much done in one take. Luke played just an 8-beat, and then we just chopped up the one that sounded best. I think I did just one, maybe two, takes on the baritone guitar. And there it was, so simple. It’s also halfway through the album, so it was pretty much a break.

Luke: We did really early on though right?

Lande: We only played it once in Exeter yeah. It didn’t sound any good, haha. That song is also a little bit slower, and it’s also more riff-y. There aren’t many songs that start in minor key, but this one is.

Dean: I think it was the first song that we actually wrote for the album.

Lande: Yeah, we wrote that literally years ago, and it’s just been lingering. It’s also gone through a lot of stages. I changed what the song was about a few times, and there’s a bit in it where it talks about how people aren’t engaged in politics, again. It also targets politicians in how we’re being blamed for not being engaged. Actually, they’re not engaged with the public, which is obviously and entirely problematic because it’s their responsibility to get the people they represent to do their bit and understand what’s going on. It’s a little bit about that.

GAS MARK 4
Luke: Gas Mark 4 is another single from the album, and it’s cool.

Lande: Yeah, I like that song. We normally play that last.

Dean: Since then we’ve had about twenty people all commenting on YouTube like, “I’m here because of Mark Hoppus!” or “Great recommendation from Mark Hoppus”, haha. And then there’s about another twenty people wondering why everyone’s talking about Mark Hoppus. It’s quite funny.

I DON’T WANNA TALK ABOUT IT
Lande: That was the last song we did for the album.

Dean: It was barely finished when we went into the studio.

Lande: I just remember botching together loads of things. Like, we’d figured out the chorus for it ages ago, because I had it lying in my little iPhone demos. One day I just decided to play it; I knew it was catchy, so I sort of based the song around it. I really hated it when I first recorded it, and I still don’t like it, but our friends have said that it’s their favourite songs. I’m not really fussed about it, though.

Lande: It’s also got another Mixolydian bridge, just in case anyone wanted to know.

COMMITTEE
Lande: Committee’s a little bit slower. When I wrote that song I thought I’d written an absolute banger, and I loved it. We’ve never played it, though. I think that it’s just a little bit lost towards the end of the album.

Luke: I think it works really well as a song on the record, and I reckon it only suits certain shows at certain times. We’d probably only play it live sometimes, because it only works in a certain atmosphere.

Lande: That song’s about people who have meetings in the DIY community and thus start ‘collectives’. It’s related to how people in the 90s would, like, start at the Olympia. Loads of girls would make plans and get together to discuss how they would make things better. The song is more relevant to us, though. People put on shows as collectives, and then start moaning when things aren’t going the way they want it to. It’s a little bit about how people aren’t as involved as they should be, but still want everything to go their way.

NO RECORDING
Dean: This we wrote while we were demoing, and we were just jamming for the first time in so long. We were talking about this the other day, as it’s so hard to find time to just play and make music for fun. That’s in the case of jamming and messing around. It started because we had a bit of spare time.

Lande: It’s called No Recording because that’s also the name of the studio it was recorded in.

Dean: So we were just jamming, and then Lande went and wrote some lyrics – the song was born!

Lande: It was recorded in the middle of the night as well. We were staying at the studio, and when our producer went home we stayed there and got back in to write it. We put it at the end of the album because it was an afterthought, so it made sense to put it there.

From Caplan to Belsize is out now.