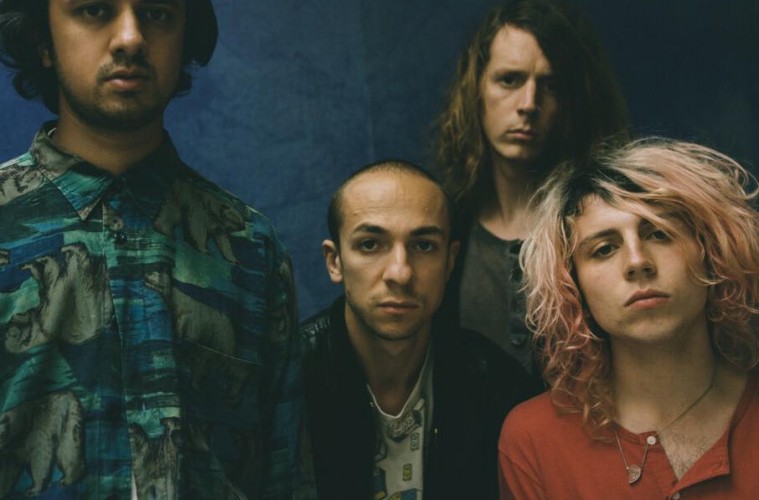 As I write this, one thing looms over my head – the death of living legend David Bowie. You see, Bowie’s love of outer space and the galaxy is something which rubbed off greatly on Mystery Jets’ new album Curve of the Earth, whether it be intentionally or not. Curve of the Earth’s ten songs all sway and swirl in universal melancholy as Blaine Harrison and his band touch upon more personal topics than ever before. Back in December, well before we knew anything was wrong with Bowie, All Things Loud trekked up to Amsterdam to discuss new music, touring and personal stories with frontman Blaine Harrison and new bassist Jack Flanagan.

As we meet the pair, Harrison and Flanagan are seated on a sofa as the former nurses an ankle injury which has left him on crutches. According to Harrison, new bassist Flanagan managed to “pump a new sense of energy” into the band as they worked on Curve of the Earth. “We felt like a gang again” continued the floppy-haired vocalist, adding that this rediscovering of the “gang mentality” was very vital for the genesis of the record. When you’re on tour, or in confined spaces as Blaine puts it, it becomes very hard to discover this mentality. The recording process was thus one in which the band managed to get back to the roots of what they were all about. Harrison claims that the final piece of the puzzle was finding the missing member of their gang, who turned out to be Flanagan. In an accompanying press release, the band claimed that Curve of the Earth is their most personal record to date. Why though? Harrison believes that this is the result of a lengthy self-reflection period which saw the touring period for last album Radlands come to an end, as well as a subsequent “chapter” in the story of Mystery Jets. Harrison claims that this reflective period let them “write about significant personal experiences from the preceding ten years”, concluding very bluntly with the fact that it was personal for that very reason. It was almost as if the band had to write about these things, especially considering as they were left with such a long period of time to look back on them. “We wanted to do something revealing” claims Harrison, by this point crouched almost completely over the sofa. When it comes to the subject of which songs were most personal for the band, Harrison immediately claims that “intimacy is present throughout the whole album”. If this was intentional he’s unsure about, as he believes that it’s hard not to enter the studio with some sort of predetermined idea of how the record will sound. “I look back at every record, and often those predictions are wrong” he states, adding that you still “can’t help but have those predictions”. Every album needs a starting point, and Harrison believes that Curve of the Earth’s starting point was the idea of writing space rock. “We were thinking of outer space a lot” he says, further concluding that the record was as much about outer space as it was about inner space, hence what made it sound so personal. Scale is mentioned as something which Harrison sees as a main theme in all the songs, particularly in the “zoomed in perspective” of lead single Telomere. The song is about looking at our DNA and the influences of ancestry. This is laid down as a basic starting point, with the following nine tracks all zooming in and out of this perspective. Once you get to Saturnine, you’re “zoomed out, almost orbiting the earth”.

When you go deeper into the individual songs on Curve of the Earth, it starts to become very clear that this a record filled with perfectionist inklings and a definite attention to detail. Two songs which are particularly of note are Midnight’s Mirror and 1985, both standout moments. It’s at this point into our discussion where Flanagan talks for the first time, starting off by telling us that Midnight’s Mirror was the last song to be written and recorded for the album. “It offers a darker colour for the record” he starts, adding that the album needed something “uglier and more visceral”. Lyrically, Midnight’s Mirror is “like looking for a broken mirror” and how what you see is a darker, more distorted version of reality. “It’s a metaphor for how you can end up feeling after a long time in a place where different rules or social norms apply”. Having said that, 1985 is one of the first songs which was written for the record. They were placed in consecutive order on the album, namely so as to create a feeling of contrast. Harrison interjects here, adding that 1985 offers the “first moment of breathing space on the record”, whilst it lyrically presents itself as a song which takes a glimpse at the journey’s the band have made since they were (all, coincidentally) born 31 years ago. The whole record does this to an extent, but 1985 is a particularly strong example. On the song, Harrison begs the question of how his “parents would have felt” when they were the same age he is now – 30. His parents were thinking of having kids (Harrison, on the other hand, isn’t, he jokes), and he always wondered how it would feel to be two star-crossed lovers at this age. “Why haven’t I found that yet?” he asks, rather sombrely. There’s an interesting dialogue which plays out between Midnight’s Mirror and 1985, both of which zoom in and out at random moments throughout. When you put these songs together alongside the rest of the record, it’s very evident that Curve of the Earth is possibly their strongest album to date. Although attempting to compare it to previous output, Harrison does feel that there is a “thread of continuity” which connects them all. “I think that Curve of the Earth represents a new chapter in the story of the band” adding that the record was self-produced and features elements which hadn’t quite been touched upon by the band before. “I think it’s a more grown up band with a more grown up sound”, even if he feels that it isn’t referential or similar to any artists they listen to. Sure, the space rock themes musically and lyrically are akin to David Bowie’s mellower songs, but this wasn’t a necessary intention. Harrison feels like the record is their own.

Curve of the Earth comes out almost four years after 2012’s Radlands graced our stereo’s, meaning that the band were gone for quite some time. Being absent for so long may have given them time to reflect and create, but it does also make things harder when you try to remain relevant for fans and casual listeners. Harrison believes that the idea of trying to stay relevant could be made dangerous by overthinking too much, adding that it’s “not really anyone’s choice”. Flanagan adds that the “pursuit of relevance is a very dangerous thing”. The bassist continues by saying that the best way to go about it is by maintaining a real, vested interest in what you’re doing and how you do it. “Simply having that helps you remain inspired to make music”, he further states. Harrison interjects again and claims that he tries to close himself off influentially during the whole process, staying away from any new music or releases. The creative process is a very special and delicate thing, meaning that Harrison didn’t want any outside interference from bands or artists which could have shaped the way Curve of the Earth eventually ended up sounding. When it comes to new records the band have enjoyed while recording, Flanagan immediately namechecks Beck’s Morning Phase as one which he particularly liked. “The sense of space within that album had a big impact on us, and it was very appealing” he adds, before Harrison claims that One Direction’s Steal my Girl was also one they enjoyed. “It didn’t influence the album, but we all loved it” he jokes, reinstating his earlier point on the way in which the music you listen to outside of the studio shouldn’t influence too much of what you write. “As long as you always keep your ears open, inspiration can come from anywhere”. Even though this wasn’t necessarily the case with Curve of the Earth, you can definitely hear that there’s a clear distinction between the classic Mystery Jets sound of the past and the one of today. Maybe their four year absence wasn’t such a bad thing after all.

Curve of the Earth is out on Friday 15 January. Listen to Telomere below.