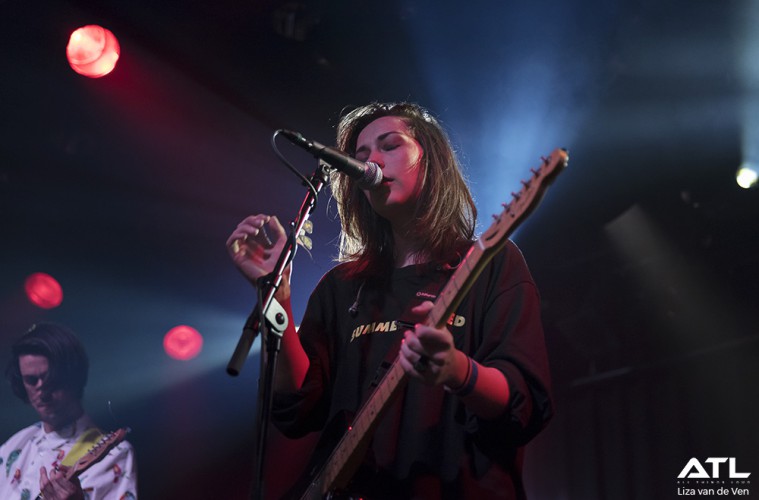 STAND ATLANTIC: “There’s no secrets with us”

What is it with Australia and catchy pop punk? That glorious land down under has quite a knack for producing top quality music in each and every corner of the musical spectrum, regardless of what it may be. Sydney’s Stand Atlantic are one of many bands currently lighting up the pop punk scene with their sickly sweet and powerful tunes, having just rounded up a successful European support tour with State Champs. Not even ten minutes after they got off stage following a sweaty show in Antwerp, vocalist/guitarist Bonnie Fraser, bassist David Potter and drummer Jonno Panichi sat down with Maui Vindevogel to discuss touring Europe, new music and Harry Potter. Additional photoshoot images taken by Liza van de Ven in Amsterdam.

Hi guys! How was the show?
David: Hello! It was very good!

Bonnie: It was really good, it was cool to be back in Antwerp. We played here last year with ROAM in November, so it was cool to see some like familiar faces.

Are you enjoying Europe so far?
Jonno: Yeah, it’s been amazing. Galaxy Camp was just insane, and then these shows have been awesome as well.

Bonnie: Just all round great.

You played a new song just tonight. What’s going on?
Bonnie: Yeah we did! We’ve been writing a lot, but unfortunately I can’t give anything else away. I’m trying to tease.

David: We can say new music is coming this year, though.

Bonnie: Yeah, we’ll definitely have some new music this year.

As an Australian band, do you notice big differences between hometown crowds and shows, and European ones?
David: Yeah! Europe tends to get a bit rowdier, which is fun.

David: Especially Cologne, and Germany in general. For whatever reason, it’s just absolutely crazy whenever we play there. Yeah Germany is good at that, I’ve heard.
Bonnie: Really? Sick! It’s awesome, they live up to the name.

Jonno: They definitely don’t let down.

Last year you released your second EP, Sidewinder. How has the response been?
Bonnie: Just crazy. Like, when we wrote that EP we didn’t really expect it. We knew it was a good EP, and we were really proud of it, but we didn’t expect it to take us to the other side of the world and literally change our lives. The response has been amazing, more than we ever anticipated, so we got swept up in everything really quickly. We still don’t even know what we’re doing here. It’s like, “how did this all happen?” But yeah, it’s been sick. We’ve been very fortunate.

You spend a lot of time with each other on the tour bus. Do you know any of each other’s guilty pleasures?
Bonnie: I feel like we’re very shameless. When we have like a guilty pleasure, it’s not even a guilty pleasure. The other day we were talking about how I like to do this weird thing with almonds where I’ll eat them and like rub them on my lip. They would give me a hard time for it, but at the end of the day it’s a guilty pleasure. We just do weird shit.

Jonno: I gave it a go and I thought it was actually sick. It feels so nice and now I understand.

David: Also: our collective love for the Jonas Brothers.

That was my first ever concert!
Bonnie: Really? You’re so lucky!

David: We have a DVD player in the van for while we’re driving through Europe and we were watching a Jonas Brothers Live concert.

Bonnie: Yeah, someone gave it to us which is so nice. It was in 3D as well, so we had four 3D glasses. It was sick. That, and High School Musical as well.

Jonno: I guess we just don’t really have guilty pleasures. There’s no secrets with us, we’re very open about everything with each other. What’s the most flabbergasting that’s ever happened on tour?
David: There’s a lot stories we can’t quite tell you; inappropriate ones.

Bonnie: There is one! We were in Slovakia and we were getting really drunk because the people we were staying with kept giving us shots all night. We were in this bar, and then we were in a group and this random dude comes up to us and he’s like, “Hey, come with me”. So we do, and we were following him down these stairs.

David: Into the basement of a bar.

Bonnie: When we get in we can hear water dripping in the back and we’re just like, “Ok, our kidneys are getting stolen”, straight up. And then all of the sudden he just opens the door to this brewery and starts giving us all these free beers. It went from a zero to a hundred real quick.

Jonno: I knew that we were going to a brewery, I just didn’t know where that brewery was because I was right there and I assumed that was their way of kicking us out.

Bonnie: He didn’t say that. He was just like, “Come with me”.

Jonno: We were being super loud, so I thought he was kicking us out and that was his way of telling us to get lost.

Bonnie: But yeah, he took us to a brewery which was pretty sick. Follow strangers everyone!

David: We all still have our kidneys.

I’ll take that advice with me then.
Bonnie: Yes, good! What’s the biggest challenge you’ve had as a band?
Jonno: For us, in a way, it was probably not giving up. During the writing of Sidewinder the band was going through a hard time where we were trying to figure out in which direction to go. At one point it was like, “If this EP doesn’t really do anything we’ll probably call it a day and give up”. That was probably the biggest one for me.

Bonnie: Yeah that’s true, I think the same. And I think we’re also very hard on ourselves for shows and that kind of stuff. I guess that’s challenging in a way, because you’re always beating yourself up about stuff that you could’ve done better.

Jonno: I always wanted to be better, but to everyone else it’s the minor things which no one really picks up on.

Bonnie: We’ve got high standards for ourselves.

Jonno: We’re learning to work through it.

David: Also to not push and be so hard on ourselves. It’s a learning curve.

Let’s move on from music. What do you enjoy, what do you to wind down and such?
Bonnie: I like art in different forms, but I’m not great at it. I just it as a little hobby. I do graphic design, and I like taking photos even though I don’t have a camera. I just use my phone, but I enjoy that. That’s about it really, other than that I just do lots of music.

Jonno: I really got into training at the gym.

Jonno: That was my pastime. I haven’t been for six months, though, so it went to shit real quick.

Jonno: If it doesn’t have anything to do with music, we’re, you know…

Jonno: Not the most exciting people. As we’ve come to learn pretty quickly. If you went to Hogwarts, what house would you be in?
David: Hufflepuff!

Bonnie: Okay look, I’ve done a lot quizzes. And I don’t know what the proper one is, but I think I did it on Pottermore and that one gave me Hufflepuff too. Isn’t that the wimpy house?

Jonno: I either had Slytherin or Gryffindor, I can’t remember.

Jonno: I don’t remember, I did it ages ago.

Bonnie: If anyone ever gets Gryffindor they’re faking it for sure. They’re just pretending, they just pick all the answers which they know will give them Gryffindor. What house are you in?

If you could be invisible for 24 hours, what would you do?
Bonnie: Oh, fuck.

Jonno: I’d probably be a fly on the wall for one of my favourite drummers and see how they go about writing songs or practising. Just be able to watch them play and delve into their brain for a day.

Bonnie: I have no idea what I would do if I was invisible. I’d probably just do the dumbest things, like steal a bike or something. I don’t know, freak people out and stuff, like drive a car and then let people freak out. That’s what I’d do, I don’t know what else.

David: I’d try and rob a casino or something. So that we’d actually have money.

Jonno: My answer was shit in comparison.

So, what’s in store for Stand Atlantic?

David: We’ve got some touring coming up. Two tours in the US with Neck Deep!

Bonnie: We’ve got something else we’re announcing tomorrow so I guess we can probably say that too.

David: Yeah. We’re touring again with State Champs in Europe and the UK. Back with the boys!

Catch Stand Atlantic on the road with State Champs this autumn.