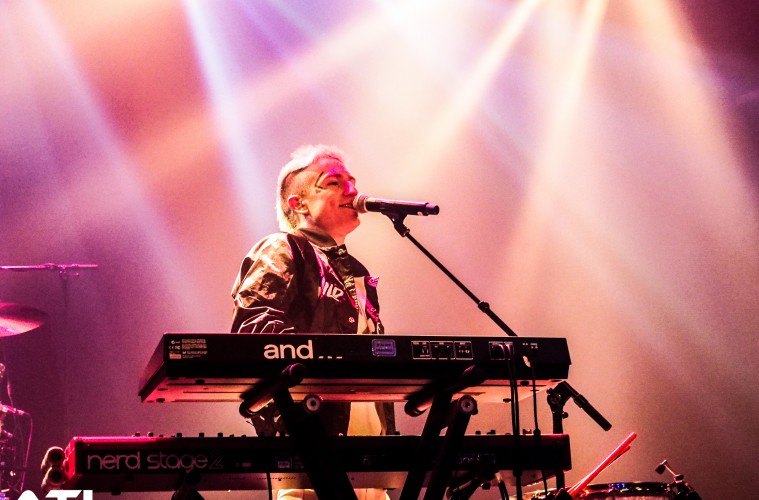 Walk the Moon: “Everything is Committed to Heightening the Musical Experience”

Back in 2014, when Walk the Moon released studio album Talking is Hard, nobody really suspected that the unassuming Ohio quartet would end up becoming the bearers of one of the world’s most addicting hits – Shut Up and Dance. The track, which has its roots firmly placed in the 1980s, helped the band shoot to stardom and quadruple their fanbase the world over. The one thing which most people will logically wonder next, though, is if there’s more to Walk the Moon then “that one catchy song”? We sat down with the whole band in Amsterdam last month to find out more.

You’ve just released the video for Work This Body. What was the concept or idea which supported it?
Nicholas Petricca (vocals): There’s this idea that we have to be like superheroes in our daily lives. In the video, we kind of feel like we’re saving the world. You know, music is really important and it helps empower people and send a message. So, with that in mind, we had this lyric which was all about kind of facing up to your fears and pushing yourself past your own limitations. We had the idea of having this schoolkid stand up to this bully and start a little revolution in his school. We’re his favourite superheroes, so it was really fun to take that idea and really run with it to see how far we could take our imaginations.

On your Facebook page, ‘lyrical’ and ‘visual’ are listed alongside ‘indie’ as a genre. How important are these two aspects for Walk the Moon?
Kevin Ray (bass): It started all the way back with Anna Sun, sort of establishing this vibe of being the “lost boys” or some kind of eternal child. One way or another, that vibe still lives within us. Part of our message is to just have fun and seize the moment, but I think that the lyrical/visual part really relates to the live show. That is the most important thing for us, the live show. The record is great, we love that, but the most important part of Walk the Moon is the live show. Interacting with people and creating this sense of community is key to us. Having that visual theme there and seeing it through our own eyes is really important.

So would you suggest that the lyrical and visual aspects go hand in hand with one another?
Kevin: Yeah, I think so.

Nicholas: Especially at this moment in history, bands are so much more three-dimensional than they’ve ever been before. Think about 1970 – all you would have is this one record, this one piece of art, and the music. And that’s all you’d have. Now, before you even listen to it you can get online and see who they are, see where they’re from, see what they’re about. This is their art, this is their life. So it’s no longer just this one “thing”; you have to have this entire depth of content that represents your band. It’s really important to us that everything is committed to heightening the musical experience.

I just want to talk a little bit about the “hit” – Shut Up and Dance. How are you dealing with the ever-growing success of that song?
Eli Maiman (guitar): It’s such a struggle, haha

Kevin: It is. It’s like the best problem you could have, meaning it’s kind of a problem almost. Obviously it’s amazing, it’s opened so many doors for us. It’s enabled us to become a touring machine and go all over the world, but it is kinda intimidating. For some reason I’m thinking about the (Harper Lee) book To Kill a Mockingbird? Harper Lee wrote that book and then never wrote anything of note ever again. We don’t wanna become that one-hit wonder. It’s kind of what Work This Body is all about, just becoming bigger than what you think you’re capable of.

But do you ever fear the possibility of just becoming a one-hit wonder?
Kevin: If it does, then it does. I don’t think we’re letting that loom over us, though. If anything, we’re using it as fuel for the fire that we’re creating.

Did you expect it to have the impact it did when you first put the song out?
Eli: We were feeling pretty good about it, to be honest. We were pretty excited about it. Before we ever recorded it, we played Shut Up and Dance live at a university show in the States and you could see a visibly different reaction to that song from pretty much everything else in the set. Even though it was the first time playing it, people were singing along by the second chorus. When you see that kind of reaction you really think that something special is gonna happen.

Of course you last released Talking is Hard back in 2014. What are your current plans for the next record? You’re also releasing a live album soon, too.
Nicholas: We’re really excited about the live album! As far as writing new music goes, we’ve set the intention for this tour in particular to be a time for us to write and demo as much as we can. On the road, in hotel rooms, during soundcheck, anywhere we can and when we have the chance. We want to have a handful of tracks recorded by the end of it.

So what kind of approach do you take when you work on a song from scratch?
Nicholas: It’s very different every time. Sometimes one person will come in with an idea and we’ll jam on that, and sometimes somebody is just screwing around in a soundcheck and we all jump aboard. We’ll bring in chords, some lyrics, everything; then we’ll teach the rest of the band. It could really come from anywhere.

I just want to touch on Spotify. The amount of plays that you guys have on there is unreal, but have you sort of noticed the struggles that artists face through not making that much money from streaming services? And have you noticed that struggle in particular yourself?
Nicholas: Definitely. You know, it’s a new world and artists have to evolve with the economy of it, and how all of that works. You don’t really have too much choice, although it’s pretty awesome that certain artists like Taylor Swift and Adele have sort of turned their nose up to some of those moguls. As a growing artist, you don’t have too much choice because it’s such a huge point of exposure. It’s such an easy place for anyone all over the world to listen to you.

Eli: And as a consumer it’s everything. To have it at your fingertips, you can’t argue with that. We might be able to fight it on our end, but we’re not gonna tell listeners to stop listening to us.

Nicholas: It ends up affecting all aspects. You can’t help but have it affect how you tour, how you think about merchandising and even releasing a record. You don’t just package an album and send it out to record stores. You also have to think about what you’re gonna release, where and when you’ll do it, to whom you’re release it, and at what point it’s just gonna be available everywhere. Bands also rely on touring way more than they used to. The exposure is in the Internet, but you gotta keep touring and showing up to these places where people have been listening to you. There are some parts of the world where we have been streamed a tonne, like in Asia or Australia, and it’s taken us four or five years to get there. It’s so much more important to do that now because your reach is so much greater.

Indeed. Thanks a lot for your time, guys.
Nicholas: No problem, thanks!

Watch the video for Work this Body below.