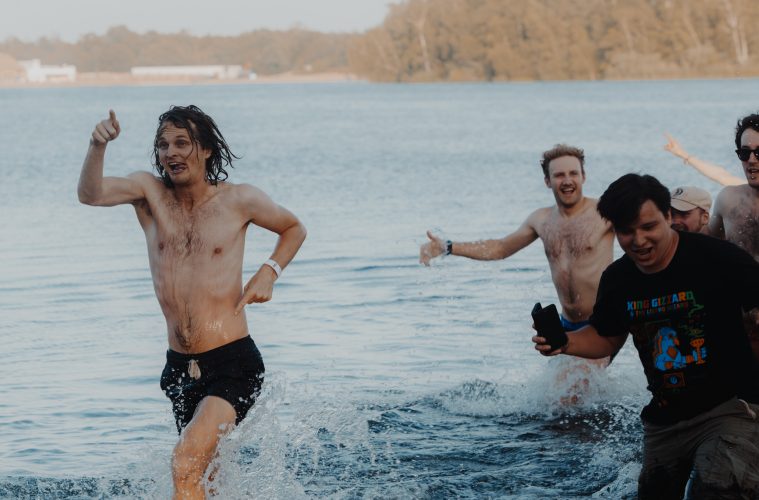 The final day of a festival is always the hardest. The excess from the previous two days starts to catch up, a little voice in the back of your mind reminds you that you cannot keep ignoring the real world for much longer, and you start to wonder how much more live music one person can objectively take. Despite that, a little voice reminds you that it’ll soon all be over and instead you should be making the most of what remains of the magical experience before real-life sets back in once again.

What better way to get rid of those feelings than with some cult-Belgian drone-metal that will tear your eyelids back inside your skull. Yes, of course I’m talking about Amenra, who take the quiet / loud contrast to all-new levels. Following this approach of waking you up by force, it’s black midi next, who continue to become weirder and weirder by the day. With the wild unpredictability of their upcoming album Hellfire taking things to a new level, their whole style certainly makes a lot more sense on stage than on recording. It’s mesmerising watching these clearly talented musicians who could be doing absolutely anything, but instead seem focused on confounding expectations and catching their audience off-guard. When you draw influence from jazz, metal and show tunes, you can at least be sure that no-one else out there sounds like you. There are moments where it all comes together perfectly, like the chaotic John L that misses its saxophone accompaniment this time around, but you do wonder what black midi might be capable of if they weren’t so seemingly afraid of their own potential.

After such an intense start to the day, Cassandra Jenkins was the perfect person to bring us back down again. If there was ever a definition of Sunday music then this is it. Cassandra’s album An Overview on Phenomenal Nature was an absolute highlight of last year, and hearing songs like Crosshairs performed in her minimal live setup is just perfect. By this point our legs don’t even have the energy to stand and watch, so we lie on the grass at the side of the stage and watch the clouds go by. Back on stage ONE, it was time for Wolf Alice, who had released the multi-award winning Blue Weekend since their last appearance. As their musical ambition seems to grow and grow, they still stubbornly refuse to let go of their thrashier past. It’s mind-blowing to think that Play The Greatest Hits and Safe From Heartbreak (if you never fall in love) both come from the same album, but both sounded great in their own way. The addition of Ryan Malcolm as touring keyboardist being able to hit those notes with the vocal harmonies elevates them to another level which they could only reproduce on recording before. The band seemed to be having the time of their lives on stage, with Theo Ellis, in particular, coming across like an excited child appreciative of the whole experience. The energy is contagious and by the end of the set, they can’t help repeating what they did the last time they played Best Kept Secret and ended up jumping back in the lake.

The clash between Wolf Alice, Nilüfer Yanya and Sky Ferreira was a particularly sore one in the timetable scheduling for this day, but after a lot of deliberation, I opted to see Sky Ferreira since she plays live so rarely and may finally be about to release the follow up to her critically acclaimed 2013 album Night Time, My Time. Twenty-two minutes later than her allocated start time, lateness being a trait that she’s more than familiar with, Sky entered the stage with her four-piece band. A large number of audience members had already given up and wandered off by this point, and I’d like to say that those who remained were treated to something special, but I cannot. Instead, we were treated to a set drawing mostly from her debut album and an overwhelming feeling of disappointment. The songs were mostly led by a backing track with the band members all looking miserable and wishing they could be anywhere other than where they were. Sky herself didn’t speak a single word to the audience between songs, and with only two new songs, both of which sounded like they haven’t moved on at all from the debut album, the whole thing felt like a big letdown. The tiny number of people remaining in the tent by the end of the short set reflected the residing indifference to this return. Steven Morgan

What happened after Sky Ferreira’s TWO disappoint was perhaps the best performance of the entire weekend (yes, better than Nick Cave too – a hard one to beat). Australian hellraisers King Gizzard & the Lizard Wizard finally received a promotion to the main stage for a 75-minute which drew on all aspects of their broad discography. Metal? Check. Microtones? Check. Drawn out garage rock and out of this world prog? Triple check. Highlight Straws in the Wind saw keyboardist Ambrose Kenny-Smith command the stage like the true born frontman that he is, with band leader Stu Mackenzie using the extended jam in the middle of The Dripping Tap to crowdsurf into the big lake and go for a swim. It felt like a victory lap of sorts, and it won’t be long before even sub-headlining on stage ONE will be too big for this band. Future headliners? Yes, but not now. One hour later, Nick Cave & the Bad Seeds filled that role. Not a dry in the house, and once again an overwhelming success. Jack Parker