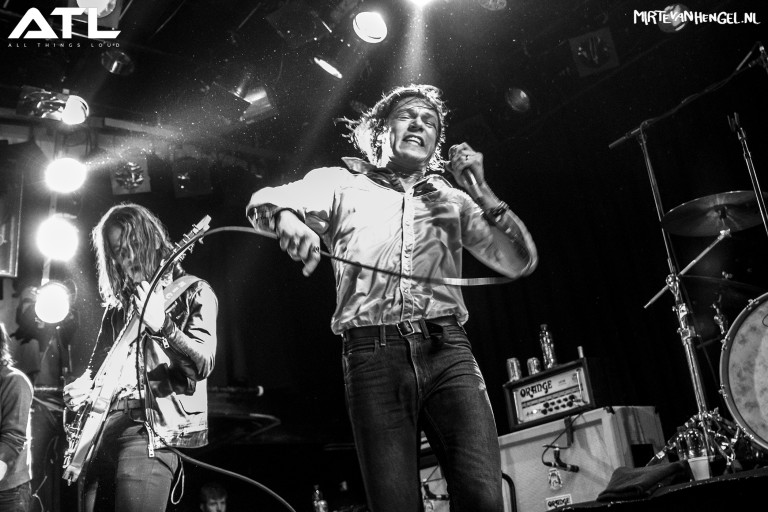 Chrome Pony took to the stage shortly before 8, with their 40-minute set drawing heavily on brand new EP Past Lives, which came out earlier this month. Although frontman Tyler Davis was nursing a cold, you wouldn’t have noticed it from the sound of his clear-cut vocals. The band, completed by drummer Kyle Davis (Tyler’s brother), bassist Jota Ese and organist Ricardo Alessio, tore through a set which mixed different elements of garage rock, blues and the occasional punk riff. With rumours circulating that the band are set to return in August for Holland’s Lowlands Festival, it seems as though this definitely will not be their only successful trip to Europe. We spent the day hanging out with Chrome Pony, and you can check that out here. With the fully sold out Melkweg Oude Zaal awaiting, Cage the Elephant took to the stage one by one and kicked off their set with new album opener Cry Baby. The slightly blues-y track, taken from December’s thrilling Tell Me I’m Pretty, is a fitting opener to any evening with descending intro lines and jangly guitars (courtesy of Brad Shultz & Lincoln Parish) appearing throughout. “You make me wanna die, baby” sang frontman Matt Shultz as he proceeded to career energetically about the small stage. You could argue that this room is far too small for Cage the Elephant, with all 750 tickets selling out in practically no time at all. On the plus side, though, these small rooms add a whole load of intimacy which Cage ultimately thrive on. Debut album track In One Ear was one of three brief throwbacks to the early days, before Melophobia (2013) cuts Spiderhead and Take It or Leave It followed. The former incorporates bombastic rhythmic elements and a stabbing piano line which lends itself more towards lilting showtunes than Cage the Elephant. “I am the one you left for dead” sang Shultz emphatically, every word being delivered with extreme conviction. Take It or Leave It’s lighter indie undertones made for an anthemic moment, before the fantastic Aberdeen powered through the speakers. Taken from 2011’s Thank You, Happy Birthday, Aberdeen encompasses a gritty intro and huge chorus. It was one of a mere three songs performed from the fantastic 2011 record, with the majority of tonight’s setlist leaning towards Tell Me I’m Pretty. The following set of songs all demonstrated this as Too Late to Say Goodbye made for the first of four consecutive new songs. Its slower, alt-rock swagger has producer Dan Auerbach’s DNA all over it, just like the Rolling Stones influenced Cold Cold Cold. “Well it’s cold cold cold, cold as ice” sang Shultz on the Paint it Black-esque banger, before he later inquires towards the whereabouts of a little girl on Sweetie Little Jean. Ballad Trouble made for an early highlight of the night, with the whole room singing along loudly to its beautifully twinkling chorus. Roughly halfway through the energetic show, the band pulled breakthrough track Ain’t No Rest For the Wicked out of the bag, its extremely bluesy undertones carrying an extra sense of awareness and swagger with them. It’s interesting to see how this song has developed in the eight years since its release, particularly due to the fact that Cage the Elephant are now an absolutely incendiary live act. Tell Me I’m Pretty’s grand finale, Portuguese Knife Fight, continued the dark and swampy blues trend as it powered along with utmost grandiosity. “I wanna waste my life with you” declared Shultz as the first batches of crowdsurfers made their way across the room. Comeback single Mess Around, a clear nod to producer (and one half of The Black Keys) Auerbach, proved a short-but-sharp moment of powerful intent, whereas Punchin’ Bag added some more anthemic elements into the mix. Melophobia’s Telescope made for another slower moment in a show filled with high-octane moments, proving that there are two extremely detailed sides to Cage’s coin. On one side you’ve got absolutely mental rock freak-outs and blues-y shuffles, whereas on the other side you have slow-burning anthems and ballads. Neither side is better than the other; rather, both are just as effective. Alison Mosshart collaboration It’s Just Forever slowly made way for the end of the set, directly preceding one of the night’s most exhilarating moments – Teeth. Incorporating a vibrant mix of punk, brass and avant garde, Teeth is one of Cage the Elephant’s best tracks. “I can feel it in my teeth and it’s driving me mad” declared Shultz as if he were a drug-addled mental patient, his voice echoing through the moshpit which had erupted a few metres in front of him. The main set closed on Come a Little Closer, its mid-tempo alt rock leaning towards stadium-sized crowds as opposed to small Amsterdam sweatboxes. The band returned swiftly for a three-song encore which opened on Melophobia’s closing track, Cigarette Daydreams. As encore openers go, Cigarette Daydreams was a slight dip in proceedings by means of its slower guitar lines and Shultz’s serene vocals. Shake Me Down pushed things forward a little bit, almost as if it was building up towards a big finish. That big finish came in the shape of the frenetic Sabertooth Tiger. As the track bubbled up, Shultz raced offstage to get rid of his shirt as he prepared to jump atop the crowd. As Sabertooth Tiger’s heavy riffs bounced off eachother in near-brutal fashion, Shultz launched himself into the crowd and finished the show standing on top of his supporting fans. Just like any normal Cage the Elephant show, it descends from purebred rock ‘n roll to organized chaos in the space of 20 songs. The only difference this time round, though, is that Cage the Elephant are slowly but surely proving themselves to be an unstoppable force both on and offstage.