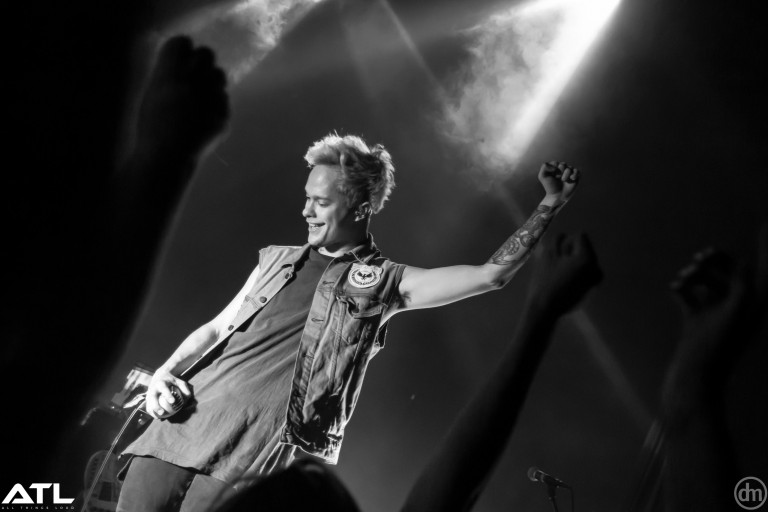 Coldrain: “You give everyone a beer and they’re all friends”

In a world where the musical landscape is often dominated by the West, it can become quite a struggle for bands from different regions to try and breakthrough into the mainstream conscience. However, for some non-Western acts it can become very easy over time. Japanese quintet Coldrain are one such example, with the band having started to really breakthrough upon the release of last year’s VENA. The record, which features guest vocals from Papa Roach’s Jacoby Shaddix, is a captivating combination of brutal metalcore and clean vocals, both of which combine to produce an irresistible end product. We caught up with lead vocalist Masato in Leiden to talk new music, the rise of Babymetal and the state of music in Japan. Let’s start with the new album, VENA. How’s the reaction been since it came out?
It’s been pretty good! It’s been our fourth record in Japan and our second record around the world and I think we’ve gained a lot of new fans with it. It’s always cool when you can attract new audiences and keep the same fans you’ve had since the start. We just love it.

How does it stand out in comparison to previous records around the world and in Japan?
Every record you try and do something a little bit different. We hadn’t released all of our records worldwide, so for VENA we looked back at what we always liked as a band, and before we even started it. We also looked back at what we love as musicians, as well as the acts that we were always influenced by. We basically tried to adapt from the things that had influenced us early on, and also listened to what we’d made as a band. The aim was to try and get bits and pieces of that so that we could make one big record out of it.

Have your influences changed much over the years?
You always love the bands that you started listening to. For me it was a lot of nu-metal, stuff like Limp Bizkit and Korn will always have a special place in my heart. You definitely get influenced by new music too. It’s always a mixture, but in a band you always start off with a certain type of music. I guess it’s usually those records that you go back to and connect with again.

Looking ahead, where do you see the band heading?
For us it’s always been a big thing to just have a huge crowd singing the songs back at us. Our future is always gonna be more song-based, instead of how heavy it goes or what’s “in” or “out. It’s not about what the scene is, so as long as we can keep on writing good songs then that’s all.

On VENA you collaborated with Jacoby from Papa Roach. How did that come about?
We toured with Papa Roach last year throughout the UK and in Paris, and we became friends. We would always be hanging out and jokingly saying to Jacoby, “you should sing on our next record man”. He’s always been one of our big idols, and Papa Roach have always been a special band to us. It’s so cool that we got it happening, and it was just insane. He texted me while we were tracking the record and just as we were tracking his song (Runaway) I said to him that all I could hear was his voice on the track. He said, “if you need guest vocals then I’m here” and we thought that it must be fate. I sent him the track, he sang on it and it was just amazing. Is there anyone else who you’d want to collaborate with?
There’s a ton of amazing singers out there, so any collaboration would be cool. I guess it comes like that, though. You meet someone, you write a song and you hear them on the track. If that happens again then we’ll definitely do it and make that happen.

So how is the scene back home in Japan?
When we started out, there were absolutely no bands around who had heavy riffs and screaming vocals. It wasn’t really a thing, but along the years more bands have started doing it. I can definitely say that we were part of a growing scene, and it’s cool to see that a lot of bands are getting more attention. The scene in Japan is still in its baby years, but in a few years from now I can see it being as big as any other country.

Crossfaith and Babymetal, for example. I just want to touch on the latter for now, because in Europe they’ve become an absolute phenomenon. They’re something that you’ve never heard before in a way, but what do you think of them?
When we started out, Crossfaith were also starting out and it took quite a long time for bands like us to get the recognition that we have now. We were there when Babymetal was first formed, and we know the people behind the music and the musicians in the group. I think it’s a big collaboration by a lot of people who are trying to get metal the attention that it deserves in Japan.

And then putting something popular on top of that?
Yeah. And then it’s cool because it’s got all that full-on Japanese culture going on. They’re getting the recognition that they deserve, and those girls really work their asses off. It’s awesome.

So how much of a struggle is it for bands from countries like Japan to breakthrough into the mainstream “western” world?
I mean, it’s not that people aren’t open-minded to listen to bands like us, but I think that they probably expect something like Babymetal. They expect that kind of vibe from Japan because it’s full of anime culture. It’s just that people haven’t been doing it for a while, which also makes it easier for American, English or Australian bands to get around. There is a language barrier, which also means that the Japanese market is more closed off. It’s just a totally different vibe. We’re gradually feeling more comfortable in doing it, and I think it’s just gonna take a little more time for other bands to show up as well. How good are the English levels of your bandmates? Because you clearly sound fluent.
Not great.

Does that make it a struggle when touring with international bands?
I mean, you give everyone a couple of beers and then they’re all friends. Haha. But it can be hard, because there’s always gonna be that little bit of communication which gets lost in translation or whatever. I think it’s cool for a lot of people though, because they don’t get to meet a lot of people from Japan. A lot of the people who come to our shows have never seen a Japanese band before, and eventually they all start buying our records and picking up merch which is cool. Everyone’s open-minded, and I love that.

How has the European tour itself been going so far?
It’s been amazing! We’ve always wanted to do headline shows in Europe, because previously we’ve only ever opened for thirty minutes. That’s like 6 songs, and now we’re playing 18. We’ve been a band for a long time in Japan, so it’s harder for us to play those smaller supporting shows. With a headline show we feel comfortable and other people love it, too.

So what can we expect from you for the rest of the year?
We’ll be writing new songs, and hopefully we get to come back and do another tour. The show keeps going, so we’ll definitely be back and writing new stuff!

Thanks for your time!
No worries man!

VENA is out now. Listen to Runaway (featuring Jacoby Shaddix of Papa Roach) below.