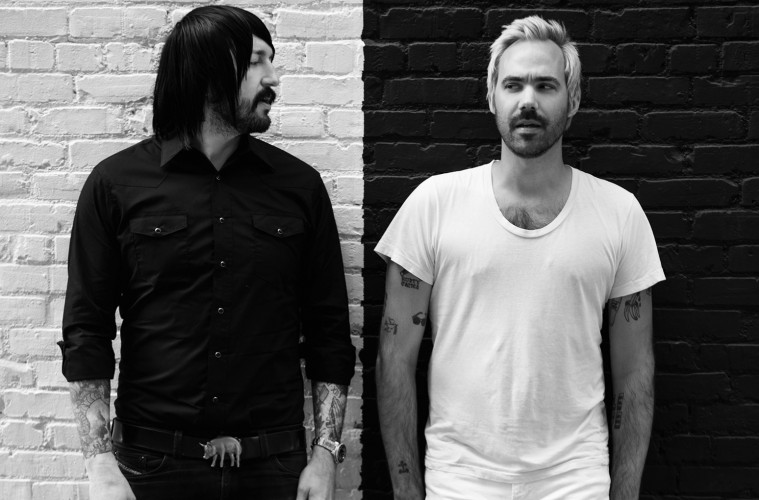 In September 2017, Canadian dance-punk duo Death From Above released their highly anticipated third album, Outrage! Is Now. Death From Above have come a long way since their first album You’re A Woman, I’m A Machine and now, three years since sophomore record The Physical World, they’ve decided to shake it up a little. In the gorgeous Hoxton Hotel in Amsterdam, Sebastien, Jesse and I sat down for chat about what changes they’ve undergone over the years, and how this mind-blowing new album came to life.

How has the album been received so far?
People seem to like it, which is great, as that’s definitely more than we could ask for. I think a generation in music isn’t the same as a generation in terms of lifetime. It’s more like four to five years, about the time it takes to finish school, and in that time a young person develops very quickly, but it’s mostly the ones that are interested in music that have the time to listen to ours. To see new young people say “yeah, I’ve never gotten to see you play because I’m not old enough to go to the show” and we’re like, “oh my god”. When it comes to old time fans, it’s a little bit difficult for us to perceive personally, but it seems like people are responding to it positively. It’s always been our primary objective to make something that excites us, and we kind of knew that this would be the band that people would like based on the bands that we were in before this. We have noticed, though, that we often think the record is more ‘different’ than our fans think it is, and we’d often get reactions that this is ‘so us’.

How would you say your music has evolved since The Physical World?
I think knowledge in general is cumulative, and you’re always building on the things that you previously didn’t know, and it’s no different for us when we’re making songs or playing shows. You keep building on the things that you’ve learnt, and I can see and hear all these points of dramatic progression for us, and I see it in my own playing sometimes; I can see that I’ve come a long way. On The Physical World I resisted writing melodies on the piano as much as I could, because I wanted to stay true to the old spirit of the band. On this new album the melodies were more refined. On our first recordings I would just kind of make up a melody in the air, and see what would happen with my voice naturally, and on this album I would write melodies on the piano almost exclusively. The level of involvement in the production was also different, because we’d never worked with a producer until we made The Physical World. Eric (Valentine, producer) did do production work, but he wasn’t in such an authoritative position. We didn’t really know how to work with him, and we ended up leaving a lot of the work up to him instead of looking over his shoulder a lot. In the end I wish we had been just a little bit more involved. On this record I was there every single day for every minute there was music up on the board.

What new songwriting elements or methods have you used that differ compared to The Physical World?
On our first record a lot of our songs were written while jamming and playing together. We’d have one riff, and we’d be playing that for a while until it crystallised into something bigger. Where we went from here was almost a stream of consciousness, moving from the one thing to the next until it was a song that felt good to us. On The Physical World we really sat down and figured out which parts should go where, and with this record even more so; nothing was just jammed into existence. The way Eric would sometimes work with us, is that he would record all the parts of our songs the way we had imagined them being, and then he would then just leave a blank space in the middle of the song, asking us what we were going to put in that spot. Those free spaces were often called odd names like ‘weirdo space’ or ‘nightmare section’ and we would think of something to fill them with off the cuff; they were left there for exploration. Him doing that was very new to us. He could listen to a song that we thought was pretty much complete, and he would point out that there should be something else in a certain section that we hadn’t thought of.

Do you scrap a lot of material, or do you feel like it might come in useful some other time?
Sometimes yeah, I’d say that it’s something like cooking. Say you bought a bunch of ingredients to cook something with, and you didn’t use all of them. The next day you would start cooking based off the things that you might have in the cupboard. Those other songs that didn’t end up on the record will end up on, like, a riff stockpile. Sometimes we’d say “oh we need a part for this, what about this thing that we’re not really using right now?” and we kind of Frankenstein everything together.

When I first read the story behind the song NVR 4EVR I was really moved. I thought it was such a beautiful gesture towards a long-time fan. Could you explain what kind of impact that song had on the both of you, and what it was like to record it?
We were writing that song at the time, and it was changing into various different forms at the time before making it onto the record. We knew that we wanted to use these ashes as something of a percussion device, but we didn’t quite know where on the record it was going to go. There wasn’t really a song yet that started with a sound like that, we just knew we wanted it to be somewhere on the record. That song had a completely different chorus, and the verses were pretty different as well, so we didn’t know exactly how it was going to turn out. Once we knew that this was the song we were going to use the shaker for, the chorus came after that part, and the concept of NVR 4EVR does relate specifically to the human creature and life itself. The performance was dedicated to that idea. To me, it’s the perfect completion of his sister’s wish, bringing his ashes on tour with us and then making him part of the record. That’s as far as we could possibly go, and I deliberately added some of the shaker off the top of the song. It originally started as a few elements together, but I didn’t want the shaker to be just a subtle layer, I wanted it to be featured, so right from the start of the song you hear it. We really wanted people to be able to pick out the sound clearly.

How did the political climate of the last two years influence the process of creating Outrage! Is Now?
How about this: the political climate has always been shitty. It’s not a function of the time and the people; it’s a function of the concept. Every presidency has been controversial, not just the most recent one. The issue isn’t the people, as there’s always going to be another moron who thinks he’s qualified to somehow lead millions of people. They’ve existed for as long as we have. It’s not any individuals or any moment. I don’t get why we play this ridiculous game, why we keep going through this process even though we can look back through thousands of years of recorded history of being lied to, being disappointed and things not going the way they were intended to, yet we still think things will be different. Outrage is forever, actually.

How do you think your live show will differ on this tour?
I hope they’ll be better! We’ve come a long way as a band, and we’ve definitely become better at, basically, being our band. When we got back together, we just looked at a setlist we used before we stopped touring and carried on from there, but now we actually have to pick things out. Some of the songs are actually precious little jewels that we’ve been polishing for so long, and sometimes we’d come to realise that we can’t play them because we have to play the newer songs. We’ve got other stones to polish now.

I once read that the musical reaction that happens when you two work together can’t be denied, and that was the reason that you got back together in 2011. What makes the way you two work together so unique? How do you complement each other?
Sebastien and I have been playing together for so long now, that there’s a lot of stuff which can happen without having to really speak, or even look at each other. We are accustomed to playing with each other to the point where I can kind of predict where or when Sebastien is going to do something. Also, in rock and roll you need some kind of a primal spirit, the proto-human spirit. When I was younger, I never imagined I would end up playing in such an instinctive way, and sometimes I might become aware of it, but I’m not doing it consciously. It just happens.

What was one of the most memorable or touching moments during one of your show, or a tour?
During a show in Australia, there was this kid in a wheelchair that came to see us, but he couldn’t see us from where he was sitting. A whole bunch of people just lifted him up and crowdsurfed him to the middle of the venue and just floated him around there for a while. The most moved I’ve been was when we were on tour with Eagles Of Death Metal, when it was their first tour after the incident at the Bataclan. For me, the whole tour was so moving, and the emotions where so high for both them and the audience. Every day we shared the stage with them felt as a gift, because they were part of such a tragedy. The fact that they were still on this earth was a gift and we felt that every night. The fans there were doing something that people just like them had died doing, and we gained a bigger appreciation for life during that tour. You value those moments so much more when there’s potentially a cost where there normally isn’t.

Outrage! Is Now is out now.