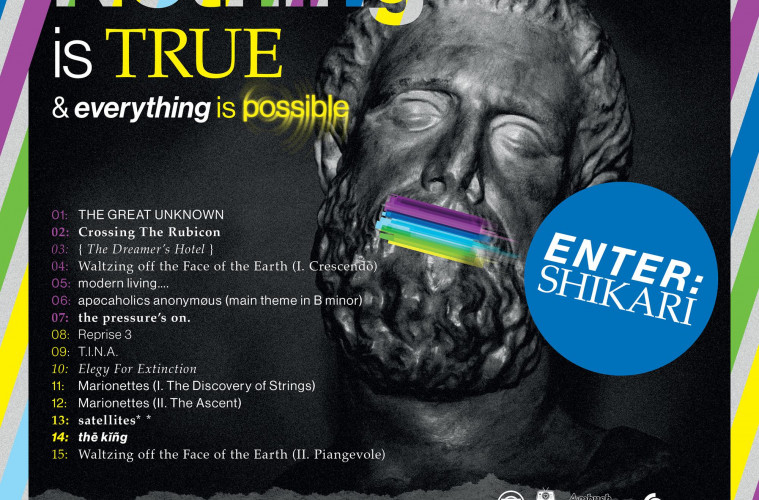 Enter Shikari’s Nothing Is True & Everything Is Possible: A Bold New Chapter

To some, right now might feel like the worst possible time to be releasing music. We live in a world which is about to change forever, in a timeline so uncertain and fearful that the best we can do is take it one day at a time and somehow hope for the best. In a way, it almost feels like not only a brand new chapter in world history has been written, but that a whole new book needs printing. Word for word, day by day. And although releasing music in a time where artists can’t even hit the road and promote their work seems daunting, there are still plenty of musicians who are powering on through and bringing their sounds to the masses in a time where we could all use it.

Enter Shikari‘s sixth studio album, Nothing Is True & Everything Is Possible not only arrives a time where history is being rewritten, but it also serves as an album which rewrites all of the band’s own rules. The rulebook has essentially been thrown out of the window, and the result is nothing short of a defining mission statement. Last year, frontman Rou Reynolds – who self-produced this album – spoke of wanting to put together the ultimate Enter Shikari album, a record which you could recommend to anyone looking to explore the St Albans quartet’s music. Is Nothing is True… that album? Not entirely, but it comes very, very close.

The record starts off on an incredibly promising note: high intensity opener The Great Unknown, which serves as the musical equivalent of trying to escape a dark cave in the dead of night. Full of despair and cloaked in wispy synths and pummelling rhythms, Reynolds sounds full of despair. Almost rave-like in its delivery, The Great Unknown is one of Enter Shikari’s best album openers to date, wasting no time and hitting the ground running. Whereas the band’s last album (The Spark, 2017) focussed more on pop elegance, it’s clear from the outset here that Nothing is True… is going to be a rollercoaster ride of sound. The more radio friendly Crossing the Rubicon is one of just few tracks which hark back to the aforementioned 2017 album, relying on a larger than life chorus to get its point across. Reynolds is confident in his vocal delivery, a recurring trend on this album as the frontman thinks outside of the box more so than ever before. Lead single { the dreamer’s hotel } once again makes for a furious (and bouncy) listen.

It’s at this point that the record starts to get very, very intriguing. Whereas the opening three tracks all operated on some sort of accessible wavelength, Waltzing Off the Face of the Earth (I. Crescendo) takes Enter Shikari down a path they’ve never explored before: a brass-laden waltz with a dark twist. Reynolds takes aim at the problems surrounding American gun violence (“there’s been a shooting in a WalMart, so put guns on every shelf“) and environmental hypocrisy (“climate change is fake“). Don’t let its quirky 3/4 tempo fool you, because lyrically this song serves as one of Reynolds’ darkest and most thought-provoking. On the surface, Modern living… sounds like another radio rock cut, but as it gets going the mid-tempo track is lathered in buzzsaw synth wobbles, rapped verses and curious vocals effects. It bridges the gap between Enter Shikari’s accessible and experimental sides, something further emphasised by apøcaholics anonymøus (main theme in B minor), an instrumental interlude akin to some of the band’s earlier, dub heavy work (think Havoc A and Havoc B [2009] on acid).

The pressure’s on brings everything back down to earth ever so slightly, relying on Spark-esque harmonies, wobbly synth lines and pounding percussion (courtesy of the ever-fantastic Rob Rolfe). We find Reynolds looking inward, introverted in his approach as he ponders the passing time. “You better figure it out now, the pressure’s on” he sings, his delivery somewhat delicate as bassist Chris Batten supports him during a bustling bridge (which leads into a euphoric finale). Batten’s bass is top class on Nothing is True…, equal parts subtle and distinct. The same can be said for guitarist Rory Clewlow, whose appearances aren’t constant but always a mix exhilarating, fierce and slick. Reprise 3 contains a reference to Enter Shikari’s debut album Take to the Skies as an eerie voice murmurs a line more than familiar with the band’s fans: “And still, we will be here”. It doesn’t last long, though, with the buzzing T.I.N.A. injecting some much welcomed energy back into proceedings. You can be sure that this track will go absolutely wild on stage, its mix of battering ram-esque breakdowns and pulsating synth lines intertwining to form an incendiary pairing. “Now I feel it coming in the air” declares Reynolds during the chorus, his vocals at their strongest here. They’re equal parts playful and confident, flittering between the two with ease on what is undoubtedly one of the band’s strongest tracks to date.

There couldn’t be a more fitting time to write a song called Elegy For Extinction. Recorded together with the City of Prague Symphonic Orchestra, this instrumental piece starts off like something out of a Hans Christian Andersen story, slowly building up before everything beautifully comes crashing down like something out of The War of the Worlds. It goes from curious and happy to destructive at the click of a finger, and by Enter Shikari’s standards it also serves as a first ever foray into orchestral music. There are echoes of unending glory littered throughout, counteracted by a harrowing ending which reminds us all that nothing is as it seems. It makes way for Marionettes (I. The Discovery of Strings), which almost fools you with its sultry, Bond theme-esque brass. It doesn’t last long for pulsating techno beats to wash the sincerity away, Reynolds’ light vocals the only constant on one of the album’s most sonically schizophrenic tracks. Chopped up vocal samples mark the chorus, with the rest of the track revelling in its own madness much like Elegy For Extinction did. Marionettes (II. The Ascent) leads the album down a darker path, one lined with chanted vocals that resemble a grim fairytale. “The world you created is not mightier than our means to recreate it” snarls Reynolds ahead of a grandiose chorus, perhaps the only ‘normal’ element to the song.

Satellites * * sees the band touch radio friendly ground one last time, incorporating “na na na” vocal licks and a chorus which soars higher than anything Enter Shikari have done in years. Reynolds wants to “soar like a meteor”, his delivery upbeat and full of hope. If 2020 is the year that Shikari strike gold with a smash hit single, then there can only be one contender. Penultimate track thē kīñg sways heavily towards emphatic brass lines, top-heavy dub synth wobbles and enough heaviness to satisfy even the toughest critic. Final track Waltzing Off the Face of the Earth (II. Piangevole) feels less like an album closer and more like the song which plays as the credits roll, closing the curtain on a diverse whirlwind of sound. Swamped in lilting strings and beautiful woodwind, it sounds like nothing you would ever expect from Rou Reynolds and his bandmates. It’s a finale which operates on such a grand scale that it elevates the band to a level higher than any they’ve been on before. It’s not just the start of a new chapter, but also of a whole new book.

Nothing is True… is a mixture of beautifully crafted soundscapes, radio friendly alt rock cuts and high-octane dance-meets-post hardcore bangers. Sure, there’s no screams on this album (a Shikari first), but when you look at the sheer amount of work put into making it sound unlike anything they’ve ever done before, a lack of screams is irrelevant at best. The album covers all bases, highlighting everything the band do well whilst introducing game-changing new elements which add a new dimension to their capabilities. It’s a slightly jarring, but fully rewarding, listen. Nothing Is True & Everything Is Possible comes out tomorrow (17 April) via SO Recordings.