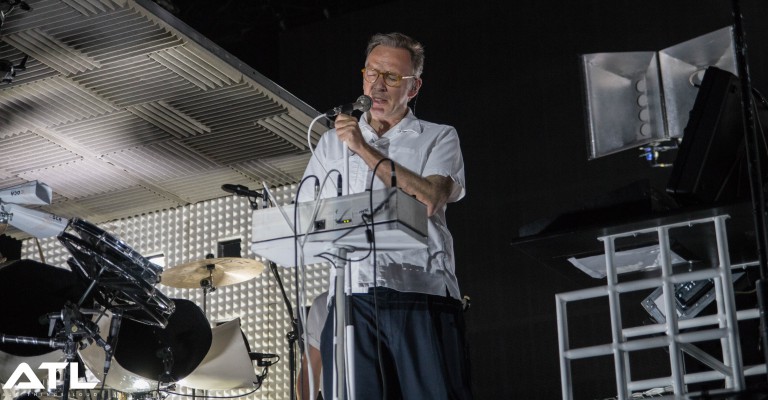 FESTIVAL REVIEW: Soulwax & Benjamin Clementine Save the ‘Saturday Dip’ at Down the Rabbit Hole

They say that the second day of a festival often presents people with some sort of ‘dip’; whether that be musically, emotionally or whatever else we don’t know, but Down the Rabbit Hole’s Saturday proved that this dip does indeed exist on a day which was complete with filler acts, the odd spectacle and a headliner who seemed just a bit too far out of their comfort zone. The day already had an off feeling to it when French outfit Babylon Circus took their party-lite music to a half-full Hotot under the premise of getting everyone moving to the sweet sounds of lovable, accordion-infused ska and reggae. Co-frontmen David Baruchel and Manuel Nectoux did their best to get the crowd moving, which they did, just in small numbers. Babylon Circus last released a studio album in 2013, so god knows what exactly they’ve been up to in the years since. It wasn’t the perfect wake-up call for Beuningen, but they sure gave it a shot. Electronic producer SOHN had somewhat more luck, with the demure weather on his (and most acts’) side as people descended upon the inner confines of a decently filled Teddy Widder. The London-via-Vienna based producer, real name Christopher Taylor, recently put out new studio album Rennen to critical acclaim on 4AD. His set slightly fell victim to an uninterested crowd, however there was just enough excitement around to sustain the impact of his dreamy and somewhat emotional electro pop. Belgian outfit Bazart took to the Hotot not too long after, leaving a lasting impression on the throngs of teenage girls positioned right in front of the stage. Hit single Goud received the biggest reaction (as was to be expected) of the whole festival day so far, hinting at a possible raise in the general dip which wasn’t helped all too much by Typhoon’s millionth festival set. Sure, his music is fun and gets people moving, but haven’t we all just seen it before?

One of the day’s superb highlights came courtesy of obscure part poet/part vocalist Benjamin Clementine, whose entire Teddy Widder set oozed with class, serenity and an absolute feeling of being part of something. Backed by a band all clad in white and blue boiler suits (including a five-piece choir), the vocalist descended upon his grand piano wearing what looked like silver carpet. It certainly added to the sheen surrounding this man, who managed to get the entire tent chanting along to set highlight Condolence. Perusing the stage like a madman, Clementine raised his arms up high as he got different parts of the crowd involved at different times, proving once and for all how much of a fantastic showman he is. Who knows where he’s headed, but it sure is good. The Dewaele brothers in Soulwax took their exciting production to a packed Hotot for what looked to be the biggest party of the day, and one which definitely didn’t go unnoticed. Kicking off their set with the pulsating Do You Want to Get Into Trouble?, Soulwax managed to get fans old and new moving at the click of a finger. They chucked popular single Krack in early on, setting the tent on fire with its manic drop and exquisite production value. Soulwax are already being hailed as the band of the summer, and that should come as a surprise to absolutely nobody. London vocalist NAO brought some feel-good vibes to the Teddy Widder afterwards, although it didn’t have as much of an impact as the aforementioned two sets.

Returning indie folkers Fleet Foxes headline the second day of the festival in their own, introverted fashion. The Seattle quintet made their return in 2016 following a three year hiatus which also saw them part ways with drummer Josh Tilman, who you’d probably now refer to as Father John Misty (FJM himself is appearing at Down the Rabbit Hole tonight [25 June]). New album Crack-Up is back to the band’s roots in a way only they know how: thoughtful indie folk with a rough edge. Live, the album came to life somewhat, partially aided by colourful visuals and an array of instruments from far and wide. Was it good? Absolutely. Did it come across well as a headline set? Not well enough it seems, as far too many people left throughout to go watch the Teddy Widder co-headliner Nicolas Jaar, whose minimal live show packed one hell of a bass-centric punch.

Down the Rabbit Hole concludes today with sets by Temples, The Avalanches and Oscar & the Wolf.