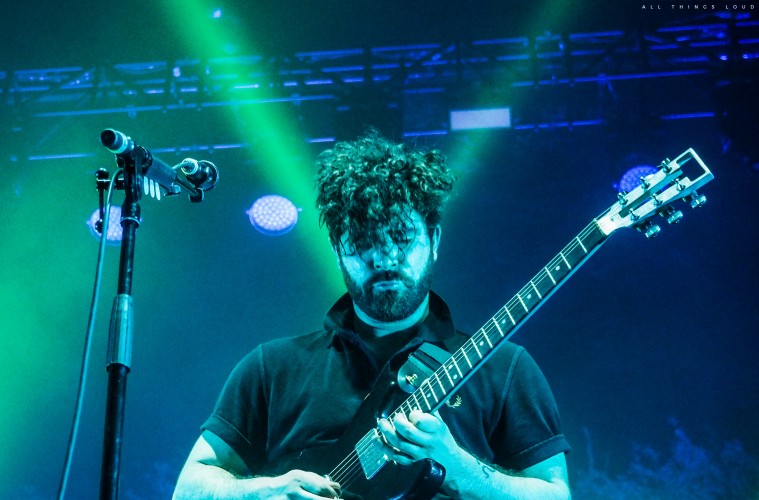 The rise of Oxfordshire quintet Foals is quite an admirable one. Having formed back in 2005, Yannis Philippakis and co. have gone from bedroom hipsters to an absolutely stunning live monster. Having released the enthralling What Went Down last year, Philippakis and co. will celebrate its approximate one-year anniversary with headline sets at the prestigious Reading & Leeds Festivals. With three additional studio albums under their belt, Foals took to the stage at Amsterdam’s Heineken Music Hall together with support from artsy poppers Everything Everything. Everything Everything took to the stage wearing matching jackets as they performed songs from last year’s album Get to Heaven. The band, fronted by the eclectic Jonathan Higgs, tore through a 45-minute set which drew from all three of their studio albums so far – Man Alive, Arc and Get to Heaven. Combining an intriguing mixture of art-pop, synth rock and absurd vocal tones, Everything Everything made a lasting impression on the half-full Heineken Music Hall (the whole evening was very much undersold). Set highlight Distant Past ended the band’s tenure on stage with Ibiza-ready synths, melodramatic vocals and a bouncing chorus. Elsewhere in the set, early standout track Kemosabe made for an electro-heavy moment, before Regret’s acapella vocals and pounding percussion (courtesy of Michael Spearman) echoed through Amsterdam’s renowned Black Box. Everything Everything may not be to everyone’s taste, but they’re certainly taking risks no other band would attempt. Foals took to the stage some 35 minutes later, kicking off their 80-minute long set with What Went Down sleaze rocker Snake Oil. Although the track sounds rather bland and overproduced on record, live Snake Oil really comes to life. Philippakis’ soaring vocals, which combine with a sleaze-to-the-max riff, mean business from the word go as Foals proved they don’t take a single prisoner wherever they go. Antidotes track Olympic Airwaves presented the hardcore fans in the crowd with a throwback moment to when Foals were everyone’s favourite MySpace band, before My Number kicked everything on the Funk-o-Meter up a notch. My Number is by far one of Foals’ stand out upbeat tracks, producing a euphoric feeling which travels in shockwaves throughout the crowd. Throughout the set, the band played six tracks from new release What Went Down. Amongst these were the one-two double header of Birch Tree and Give it All, two tracks which represent a more focussed and subdued alt-rock side to Foals’ generously vibrant (and sometimes hyperactive) music. 2013’s Holy Fire was also represented kindly, with the bubbling Providence receiving a thrilling outing. When you take a song like Providence and bathe it in a stellar light show, things don’t look like they could really go wrong. Even though the Heineken Music Hall is way too big for a band like Foals (on Dutch soil, at least), they still managed to live up to the expectations on a show-front and put on an exciting light show which saw smoke and lasers in abundance. Newer track Mountain at my Gates built up ever so slowly to make for an absolutely cataclysmic ending, before all-time fan favourite Spanish Sahara received one of the night’s biggest receptions so far. It’s a calmer track, taken from 2010’s Total Life Forever, yet it’s also one of Foals’ most encapsulating. The more upbeat Red Socks Pugie followed, slowly but surely making way for the end of the main set. Holy Fire cut Late Night pulled everything back slightly, before What Went Down finale A Knife in the Ocean saw the band go full-on hypnotic. “Watch your P’s and Q’s” sang Philippakis as a swirling guitar line soared and echoed throughout the room. The main set came to an end on Inhaler, a track which Philippakis preceded with the invitation to “get your fucking vibe on, Amsterdam”. His plea was met with raucous crowd interaction, something particularly down to the heavy-yet-catchy chorus Inhaler bears. Leaving the stage after just 12 songs, everything seemed to end pretty soon for a band that are currently really close to hitting their prime in mainland Europe. The band eventually returned for an encore which kicked off on What Went Down slow burner London Thunder. As the track ever so slowly built up, the feeling that something big was coming grew closer and closer. This eventually calmed down a bit, before new album stomper (and title track) What Went Down tore the Heineken Music Hall’s roof off. “When I see a man I see a lion” yelled Philippakis, before jumping offstage and launching himself into and on top of the crowd for the duration of the song. It made for the absolute high-point in the whole set, something which show closer Two Steps, Twice almost levelled. As the track built up to a manic ending, Philippakis decided to test his limits even further and run off stage in the direction of the venue bar, swarms of fans and photographers following his every move. It was a memorable ending to a memorable show, one which seemed slightly marred by the fact that the Heineken Music Hall is way too grandiose for Foals’ liking. The quintet rely on intimacy, and it’s something which makes their shows all the more worth living for. Although Foals do deserve to be this big (their hard work definitely hasn’t gone unnoticed), sometimes a little bit smaller is even better. Click here for more pictures from the show. Foals will return to Holland in August for Lowlands Festival.