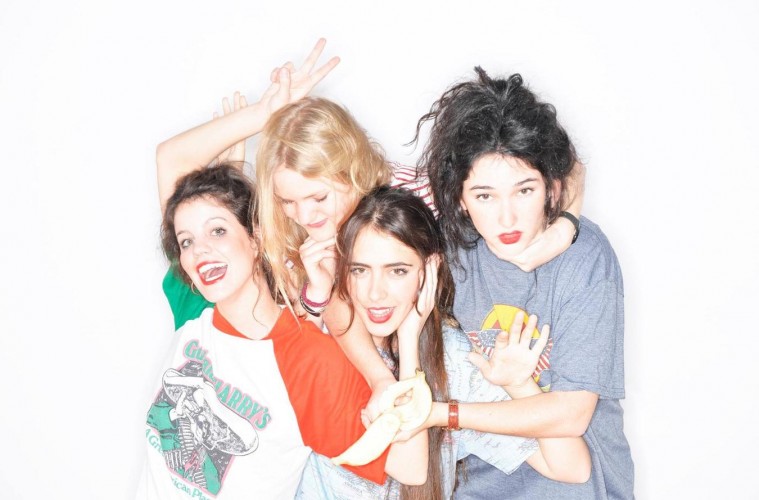 Hinds: “It’s all about metrics”

It’s been a long and hard year for the Spanish ladies in Hinds. Originally known as Deers, their moniker was soon altered in lieu of a potential lawsuit. Hinds is what became of it, with the quartet having just put out their debut album. Filled with blissful garage pop melodies and ramshackle elements, it looks set to be one of the finest, rawest records of the coming year. All Things Loud spoke to the band ahead of the release and uncovered some interesting insights into the world of Hinds.

With Hinds being relatively new band, the story of their inception is an oft-recounted one. The band, co-fronted by vocalists/guitarists Carlotta Cosials and Ana Perrote, formed back in 2011 during a “trip to the Spanish coast”. As Cosials explains, Hinds’ inception seemed to just happen naturally. “It was just because we felt very free, and thought we could make music”. There wasn’t much more to it, with bassist Ade Martin and drummer Amber Grimbergen also making out part of the four-piece. Having formed under the name Deers, the quartet changed their name to Hinds (the word for a female deer) at the end of 2014 following a lawsuit threat from a band with a similar name. “They had a lawyer, we didn’t; they had money, we didn’t and still don’t” she explained, although it seems as though they’ve fully gotten over the saga which surrounded the name change. “It’s like a break-up, we’re over it” claimed the frontwoman.

As you read this, Hinds have put out a stellar debut album under the title Leave Me Alone. It’s been a long time in the making, and its contents contains a blissful selection of raw, garage rock with a poppy edge. The recording process was very straightforward, with the band keeping things the exact same way as they are onstage. Cosials tells us that the mixing was the “hardest part”, adding that every single song they worked on and recorded made it onto the record. All the songs on Leave Me Alone are influenced by Hinds’ personal lives and experiences, with Cosials explaining how their lyrical delivery draws influences from hip-hop. Namechecking the likes of Drake and Kendrick Lamar, she tells us that “we love to say so many things in a little amount of time”. Although on the surface you wouldn’t consider this hip-hop influence immediately, further examination of Leave Me Alone’s vocal delivery make it far more recognizable (“it’s all about metrics”, apparently). Away from the hip-hop influence, Alex Turner and The Strokes are also namechecked as lyrical and musical influences, respectively.

Two songs we focussed on in more depth during our discussion were album cuts Garden and Easy. The former, as Cosials explains, is a “completely different thing” compared to other Hinds songs. “It all started with us in the rehearsal space answering eachother”, adding that they used “very classic chords so that we could add crazy things vocally”. The loose chord structure which underpins Garden means that they’re able to do things vocally which are reminiscent of their hip-hop influences. The lyrics concerned asking questions to someone who can’t answer them. “We talked a little bit about a person who knows everything and becomes the solution to your life” explains Cosials, posing a rhetorical question in “are you really that, or are you as clear as you think?” The band took the character they created for Garden out of their comfort zone.  Easy, on the other hand, came out in an ironically easy way. As Perrote explains, she thought of a melody when she went to the toilet and “came back singing it”. “I don’t think it exists, so we built chords around it”. The song, as Perrote further continues, is about putting yourself in the worst position of a break-up and how you subsequently deal with it. “It was so difficult for us to find a chorus. The guitar riff in the chorus was to good so we let it sing the chorus for us” concludes the co-vocalist.

Hinds are a band who ooze with confidence. When asked at what point they thought that the band could become something, Cosials immediately claims that it was “the first day”. “We uploaded a song to Bandcamp, and after that we received an email from NME. It was bizarre and special” she says, adding that in five years’ time she sees the band as simply being “happy”. They’ve definitely got a lot to be happy about, especially when it comes to the rave live reviews they received throughout 2015. America, as the whole band agree, is their favourite place to tour. Cosials speaks for the group in saying that Americans “appreciate the feel of a musician, and think that you’re doing a great thing”. According to her, music in America is still considered as a “great thing which could improve the world”. Americans, as Cosials concludes, “look at you with other eyes”. It’s obviously tough for a band from a different country to break through in the US, yet how is the scene in Spain? Hinds don’t even seem to know themselves, claiming that they’re “never home” for long enough to catch a glimpse of the local Spanish scene. Concluding our discussion, Cosials tells us to expect a lot from Hinds in 2016. “Keep on rocking in the free world” is their main hope, and it definitely looks like something which isn’t going to stop them whatsoever.

Hinds’ debut album Leave Me Alone is out on 8 January via Lucky Number/Caroline.