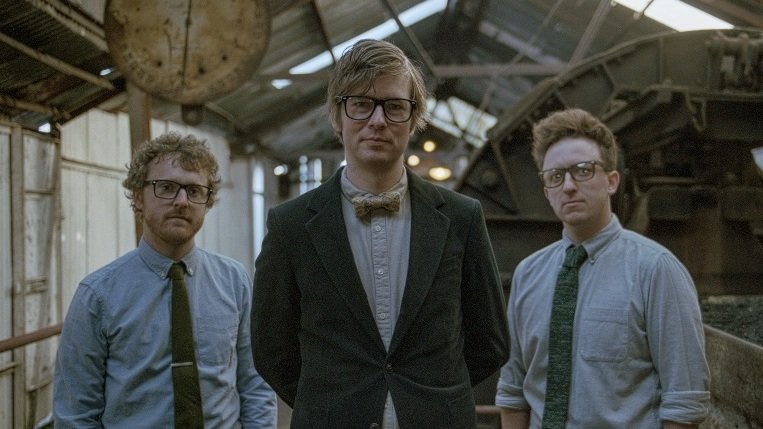 INTERVIEW: Public Service Broadcasting On Every Valley, Touring With Editors and the Titanic

When it comes to nailing down a concept and hammering it home with utmost intensity and power, Public Service Broadcasting really do tick all the boxes. The London-based three-piece have become a household name in Britain’s quirky indie scene due to their intricate mixture of deep conceptual offshoots, beautiful arrangements and clever use of samples. On new album Every Valley, the outfit relocated to a disused Welsh steelworks factory as they embraced another milestone in modern history for their conceptual gain – the mining and coal industry, and all of the various strands which surround this. We called up frontman J Willgoose, Esq. ahead of the band’s show with Editors at the Ziggo Dome tonight (27 March) to discuss the new album, touring with a band of Editors’ stature and other little bits and pieces which they have lined up for themselves this year.

Hey J. How are you doing?
Okay, thanks. We’ve just arrived at the venue for tonight. And yourself?

I’m great, thanks! Your most recent record, Every Valley, came out last summer. What conceptually attracted you to Wales, in particular the mining industry?
That’s a good question. I think it was partly a reaction against the previous album – 2015’s The Race For Space – and not wanting to become too predictable in terms of subject matter. All of our previous music covered similar topics, so going for some industrial heritage was an interesting challenge, especially in terms of making it interesting for such a closed audience. The more I researched various aspects of it through the BFI archives, such as industrial disputes and the history of coal, the more this topic really entered the foreground. The challenge was thus also to work with local musicians and visit a part of the world which I hadn’t been to before.

Away from the conceptual side of things, what impact did your chosen recording location have on the general vibe and recording process? Especially as you recorded The Race For Space in regular studios.
It’s a very hard thing to answer, as it’s very much intangible. Every room has an effect on you, and it’s not always easy to quantify that. Every room you spend lots of time in doing intense work is going to filter through you in all sorts of different ways. We transformed this one for our own purposes, and the whole sound of that room is the sound of the record. When I got home to mix and edit it and such, it was the first time I’d heard the songs when not being in that room. It took me right back to all the sessions we had there; it filtered through.

How did you get in touch with the local musicians you worked with on the album?
All of the people who we worked with came from the local area, and we engaged with them through the studio owners nearby who recommended them. We also worked with James from Manic Street Preachers, something which we instigated ourselves through having supported them; and he was up for it, which was great. The male choir came through a man called Chris from The Bell Institute. I asked him if he knew any good male choirs, and he recommended me the one we worked with on Every Valley. I went to watch them rehearse, met them and then they came down to the studio and recorded a track. That was a very special night for us all.

This year has seen plenty of technological and industrial changes occur. What do you tend to look for when you work on a concept for new music?
You’ve always got to look for something which captures your imagination and intersets, and which allows you to spread your wings and challenge yourself. The Race For Space saw us compress the entire golden age of space exploration into 8 or 9 songs, and you have to harness those reactions in the right way whilst stretching yourself into all sorts of different reactions. In regards to Every Valley, this was a story which we found both very moving and very politically relevant, especially considering things like decreasing workers rates and internal disputes. Topically, it’s also got to be something which grabs me, as I’ll need to be touring it for two years or more and need to talk about it and live with it. That’s also important.

You’re currently on the road with Editors playing some huge shows. How have they been?
They’ve been great! We’ve been on a few tours in the past where you can see that you’re really dividing people – some are into it, and some aren’t. Some of those who haven’t been into it have also been quite direct in expressing that in the past, haha. This time round, though, it’s been very positive! We played with Editors at the end of 2015 when they toured In Dream, and we did three shows with them. We could tell that it was quite a close match in terms of audience. On this tour it’s been working our very well, as we also aren’t very well known in Europe.

How do you find yourself adjusting to considerably larger live shows, and what have you learnt from Editors on this run?
Being the support act, you don’t have too much opportunity to adjust yourself to bigger spaces. The staging is built for Editors – and rightly so, they’re great – so you only get a small part of that stage and the use of less lights. Your job is to warm up the crowd and not put your own spin on things. You’ve just got to focus on playing to the best of your ability, and we really rely on our crew to help make sure that it all sounds good in such a big room. If you’re a support act who try to hard, then I think you’re in danger of losing people. You can’t push crowds too hard, you need to let them come to you and that’s the approach we like to take.

So what’s next for Public Service Broadcasting this year?
Quite a lot, hopefully! We’ve got a UK tour in April, and then we’ve got Australia, New Zealand and the festival season. After that we’re doing a commission for the BBC where we’ll be writing songs about the Titanic as part of Belfast’s Biggest Weekend. We’re working on music for that, which we’ll release later this year. We’re doing a lot of research for this project, and it’s very exciting. Hopefully there will be more new material alongside that, and then we’ll be looking towards album number four. That’ll still be a couple of years out from where I’m standing now, though.

Every Valley is out now. Public Service Broadcasting are currently on the road with Editors.