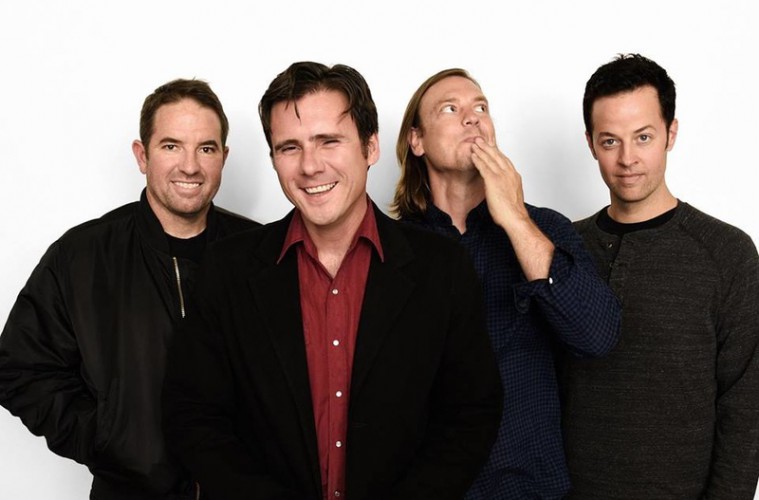 On Friday, alternative rockers Jimmy Eat World will release brand new studio album Integrity Blues, their first since 2013’s Damage. The record is a world away from the eclectic pop-punk of Jim Adkins and co.’s early years, rather opting to focus on a selection of ethereal soundscapes which find their roots embedded in the worlds of post rock and alternative radio rock. We called up guitarist Tom Linton to discuss new music, working with Justin Meldal-Johnson and what impact Taylor Swift’s infamous Apple Music advert had on them.

Hi Tom. Your new record Integrity Blues comes out in October. How did the record come to be what it is today?
Integrity Blues was actually the longest break that we took. We really stepped back after out last tour and took a long break, and after that we got together and decided to make a different which was different to anything we’d ever done. Why make a record otherwise? We found Justin (Meldal-Johnson) to produce it, and he’s really knowledgeable about a lot of different keyboard-based stuff.

It’s your ninth studio album. How does it stand out in comparison to your previous output?
I think that Integrity Blues is the best record we’ve ever done. The songs are the best, and we’re really proud of it.

The ending in Pass the Baby, for example, is particular encapsulating, mixing elements of noise with an extremely heavy riff. What’s the story behind this song?
Pass the Baby is one of the oldest songs that we had sitting around. It’s from 2005 and it originally just started out with the drum part. Jim (Adkins, vocals) had a little bit of the verse written, and he always had a vision of the song going into the studio. We had to figure out how to get there, basically. We added different elements, with the end riff being the heaviest thing we’d ever done before.

You worked with Justin Meldal-Johnson as producer, and he’s previously worked with M83 and Paramore. What did he bring to the table?
Song structure. He took the songs (of which had 30 to 40) and picked out the most promising ones. He did so much, and he was a huge part of the process. Justin was really good at pushing us and doing things that we’d never done before.

And why did you choose to work with him in particular?
We were just looking at his past records, like M83 and Paramore, and we liked a lot of those sounds. We’d heard lots of good things about the way he makes bands feel in the studio, for example by just making people feel comfortable.

Would you work with him again?
Yeah, for sure. He did a great job.

Many people have described Jimmy Eat World as one of the best pop-punk bands of all time. However, your later output has definitely departed that genre. How would you describe your sound now, and how do you see it progressing in the future?
How would I describe it? That’s always a tough one. I guess we’re just a melodic rock band, y’know? I think we always try to push ourselves to write the best songs that we can, and that’s what we’ll keep trying to do: making the best songs that we can and doing things differently. As for the future? We haven’t started thinking that far yet.

As you progressed as a band, the pop-punk world grew and developed quite a bit. What do you think of the current crop of bands?
We don’t pay that much attention to it anymore, to be honest.

Are there any new bands you’ve been listening to?
Let’s see. There’s a band called Telekinesis that I like a lot. I think they’re from Seattle, and the drummer sings. They’re on Merge Records, and they’re basically just a great band with a great songwriter.

I just want to bring up the recent Apple Music advertisement which saw Taylor Swift lip-sync hit track The Middle (above). What effect has that had on you from a commercial perspective?
I mean, having her do that was really crazy. We had a warning that she was interested in doing it, so seeing her do so really blew us away. We never thought someone that popular would do that. We haven’t really been on the road or anything recently, but we did get a lot of Instagram followers. It’ll be interesting to see if more people come to our shows.

Thanks for your time!
No problem.

Integrity Blues comes out on Friday. Order it here.