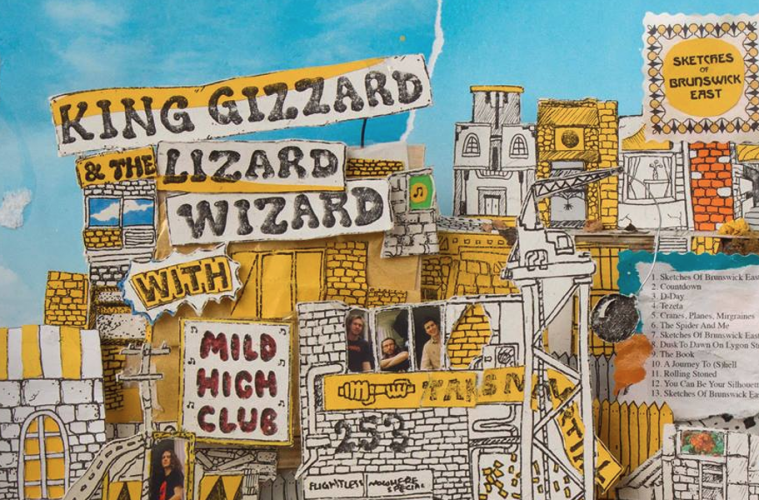 King Gizzard & the Lizard Wizard have released a new album. Now, where have we heard that before? Ah yes, that’s right; Stu Mackenzie and co. don’t know how to stop and have somehow just managed to put out their third studio album of 2017: the jazz-infused Sketches of Brunswick East, a collaborative piece made in harmony with American project Mild High Club. It’s the furthest you’ll ever get (sonically) from the Aussie septet’s previous album, summer standout Murder of the Universe, as well as its counterpart Nonagon Infinity. Not to mention the microtone-influenced Flying Microtonal Banana, which the group shared with the world back in February. It seems like such a long time ago now that the band pencilled out plans for five studio albums, and with the sudden release of Sketches of Brunswick East (the band were said to have dropped it in their own time and at their own will) it looks to only get closer and closer to reality. From the off, it’s evident that we shouldn’t expect a doom metal opera or Arabic fairytale; instead, we’re instantly met with jazzy keys and a 3/4 rhythm which seems to have accentuated great parts of the record. Opening track Sketches of Brunswick East I introduces the flute back into Gizzard’s arsenal, operating on a slower pace to most of their album openers. It makes way for the serene Countdown and microtone-esque D-Day, the former of which has Mild High Club’s peaceful slow-jams written all over it. Mackenzie takes on vocal duties for a majority of the album, with Mild High’s Alexander Brettin jetting in and out throughout. The record is met by an early highlight in the shape of the relatively darker Tezeta, with synth lines resembling eerie circus tones. “Tezeta, Tezeta, remember, remember” chant the band and Brettin, with one background vocal sounding awfully familiar. That’s right, it resembles the robotic voice which Murder of the Universe introduced as its final narrator, Han-Tyumi. Knowing King Gizzard and their almost universe-like ways, it wouldn’t come as too much of a surprise if this link is an intentional attempt at solidifying the already well thought-out connections between their prior studio albums. Tezeta continues to power along nicely by means of a groove-laden rhythm section and hypnotic closing. It sounds everything and nothing like King Gizzard & the Lizard Wizard at the same time, which is what makes this band so sublime in terms of their output and its subsequent quality. Tezeta makes way for the bustling Cranes, Planes, Migraines, a track which abolishes all vocals and instead opts to reintroduce the flute alongside various intriguing soundbites and well-structured percussive moments, once again courtesy of Michael Cavanagh and Eric Moore. The Spider and Me links into the end of the aforementioned, encompassing xylophones which follow the same melodic path as Brettin and Mackenzie’s vocals. So far, it’s evident that Sketches of East Brunswick is once again an interconnected piece of music, with the percussion largely remaining the same throughout as a means of supporting the alternating guitar lines and synth-laden outings. The album reaches its halfway point by returning to its roots on Sketches of Brunswick East II, which kicks off on a vintage soundbite before making way for flute-fronted acid jazz, a great example of both bands’ combined expertise being utilized to their fullest. It’s only once you listen extremely carefully that you notice all the layers embedded within the album, and you probably won’t completely get it until two or three listens later. Dusk to Dawn picks up the pace slightly with some rhythmic stabs early on, before fizzling out into a jazzy slow-jam backed up by wildlife soundbites. It bears some resemblance to Gizzard’s older cut Quarters, particularly due to its seamless intertwining of different musical fragments and repeating fragments. The Book makes for another late highlight on the album, edging on the microtonal thanks to Ambrose Smith’s synth lines. Much like Tezeta, The Book is somewhat darker in comparison to the rest of the record. “Like it or not, I live by the book” declares Mackenzie during the chorus, one which makes way for acid-flecked guitar battles and descending synth lines. A Journey to S(Hell) is one of the album’s more obscure moments, sounding very much like its title suggests: a sonic journey to hell flanked by siren-esque synth noises and out-of-whack percussion. It makes way for its musical polar opposite Rolling Stoned, which Mild High Club had previously debuted live alongside Mackenzie on flute. It’s no different on the recorded version, albeit some tweaks do seem to have been made in the process. As the album careers towards a lilting end, You Can Be Your Silhouette hands control back over to Mackenzie, whose soothing and soulful vocals lace this track with sonic honey. It borders on the outskirts of lounge music, an outing which the band have made in the past on 2015s Papier Mache Dream Balloon, the only piece of music in Gizzard’s back catalogue which resembles Sketches… in the slightest. The record comes to a close on a warped Sketches of Brunswick East III, which features Mackenzie’s flute for one last time. As the curtain falls on yet another album by this magnificent Australian septet, it becomes evident once more that there is absolutely no way of stopping their creative capabilities, whether it be putting out the heaviest album of their careers (Murder of the Universe), stripping it all back (Papier Mache Dream Balloon) or doing what they did on this record. There seems to be little in the way of information surrounding the final two albums of their 2017 creative streak but, and knowing this band, it could honestly go in any given direction.

8/10. Sketches of Brunswick East is out now.