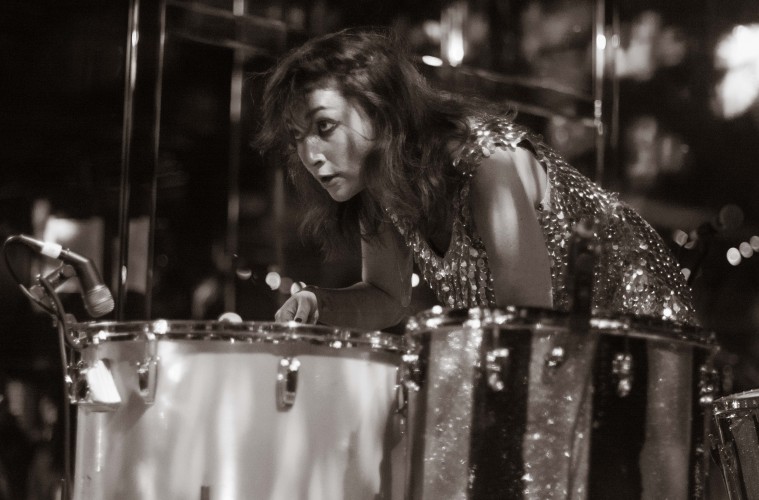 KOLARS and Frigs Stand Out on First Day of Savannah Stopover

Savannah may not immediately strike you as the ideal setting for a music festival, but the city’s collection of intimate venues that have helped create an oasis of artistry and culture absolutely lends itself to the occasion. Clustered around the brick-bedecked picturesque historic downtown is a diverse collection of bars and clubs that showcase the character of the city as much as the artists playing in them.

Frigs, from Toronto, kicked off the Thursday lineup, with frontwoman Bria Salmela making full use of the barely-there stage of El Rocko lounge. As soon as the band lurched into their first song, she began channeling the music with her body, summoning a spell that began in the core of her being and extended to the tips of her long nails. A smoky alto as capable of producing nearly inhuman vocalizations as a steady tone perfectly complemented her movements. At one point, she picked up her vocal effect pedals, carrying the box like a talisman invoking the gods of punk. Altogether, Salmela’s persona enchanted audience and band members alike, working the guitarist into a frenzy that resulted in a broken string and nearly prodding crowd members with the mic stand. Unlike the polite substitution for a stronger expletive that is the band’s name, there was nothing restrained about Frig’s performance.

Club One played host to high-energy acts Vita and the Woolf and KOLARS. Jenn Pague of Vita was electrifying in a vibrant sequin jacket and synth, drums, and guitar setup that showcased her powerful voice. Like her soaring melodic lines, her performance was completely uninhibited, from her ecstatic dancing to frankly expressed political views. This was perfectly represented with a new song she performed at the end of her set. Asking the audience, “do you like dance?”, her own answer to the question was quickly answered with bouncing and head-banging that quickly moved the crowd to follow suit.

KOLARS built upon Vita’s energy, taking full advantage of the venue’s disco ball and mirror-ensconced stage to deliver a dazzling show. The music of KOLARS is good, with steady danceable rhythms and nostalgic guitar, but to truly grasp their act requires experiencing them live. Even without knowing the couple is married, you can feel the connection between these two in the feedback loop of energy that fuels their performance. Offstage, their matching shimmering costumes may seem outlandish, but in the dim lighting and and atmosphere of an expectant audience, the entertainment package that is KOLARS makes complete sense. Describing Lauren Brown’s unconventional combination of tap dancing and drumming still doesn’t capture the way she commits her body and soul to the performance, coordinating arms and feet in a dance that miraculously produces the same beat to which it keeps time. The ritual isn’t just for show; the click of her tap shoes can be heard over the bass of the drum upon which she stands to created a layered effect that suggests more than one performer. Rob Kolar wholly inhabits his role as well, channeling Elvis with leg twists winding up wide strums with his guitar arm. At one point, the music overtook him and he descended the stage to nearly collapse from rock n’ roll euphoria in the crowd. Back on the platform, face upturned at the perfect angle to catch the light from the duo’s self-furnished glowing vintage mic, his eyes sparkle from beneath his curls and gaze into some source of dizzying energy known only to him.

Zuli took the stage in Barrelhouse South, a bar with dangling Edison lights and faux cowhide-backed bar chairs reminiscent of a star-studded night in Southern fields. Fronted by Ryan Camenzuli, the band treated audience members to nostalgic indie pop-rock jams that got them bopping along in a summery haze. Nashville band Okey Dokey closed out the night following their touring mates Zuli. Frontman Aaron Martin soon turned the show into half rock show-half stand up routine. Boosted by his camaraderie with guitarist Johny Fisher, Martin joked with the audience throughout the show, suggesting they buy the band and technician drinks after some brushed-off technical difficulties. Martin’s expansive personality existed not just in metaphor, as he reached up to turn the suspended lights into pendulums, planted the mic stand on the ceiling, and climbed up onto the bar. Clearly, the venue was Martin’s playground as much as his performance space. Despite the antics, Okey Dokey’s psychedelic sounds and relatable whimsy adopted the audience into their family, teasing out shameless dance moves late into the night. Dylan Lai / Shots by Abi Raymaker