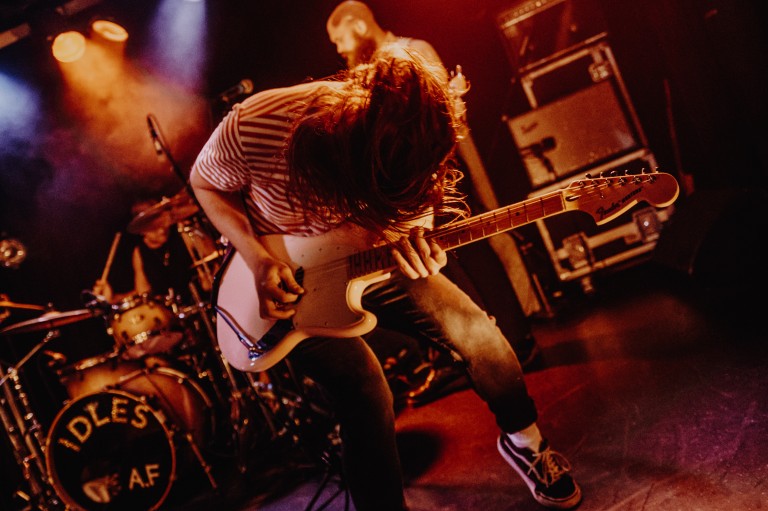 LIVE: IDLES Tear It Up at EKKO

You may be asking yourself.

“Didn’t this website cover IDLES playing Rotterdam just the other day? Is there really a need for more live coverage of IDLES?“.

If this is the question that your mind has asked, I can only assume that you haven’t seen IDLES live, or do not engage in things such as fun. IDLES are one of the most vital, politically charged, pro-feminist, genre-hopping, intense bands out there and they’re in a golden age. This is their moment. With their second album Joy As An Act Of Resistance just a month away from release, there’s a good chance this will be the last time a band of this calibre will play a venue so small. This band could change your life. This is that beautiful transition spot where the buzz that Brutalism generated will spiral into something big. You could feel it in the atmosphere at EKKO. We were the lucky few.

First things first though, and the sole support of the night was FFOOSS. They did what they could to warm the crowd up despite technical difficulties such as malfunctioning amplifiers and cymbals falling over, but the lure of the World Cup semi-final was too much for most to tear themselves away from, resulting in an undeservedly empty room. The riff-heavy music the two-piece make has similarities to many other two-piece meat and potato rock outfits, though with a slight psyche angle. There’s an undeniable charm to what they do but the audience was there for one thing and one thing only. In the hours leading up to the performance itself, there was an announcement of a last-minute extension of their set time, bringing it forward by 15 minutes to give the audience a longer set. I don’t know what prompted it, but it was news that I was more than happy enough to welcome. With two albums and two EPs worth of material behind them now, they’ve got more than enough to be filling a setlist with.

The moment the band took the stage, you could feel the excitement through the room. This isn’t a room where you get to slip out through the backstage; they made their way through the crowd till they were able to climb up and take their instruments. Frontman Joe Talbot paced around the front of the stage as though marking his territory as the rest of the band made one last check to ensure their instruments were functioning. Moments later drummer Jon Beavis kicked into the familiar beat of Brutalism opener Heel / Heal, and then the fun began. As the guitars rang out and Talbot launched into the opening line of “I move into a Bovis Home” the volume was as intense coming both from and to the stage, in a moment of beautiful unity. The simplicity and vivid imagery of their lyrics sticks around in your head long after the songs finish, and in this environment the audience and the band come together as one. Do they even have Bovis Homes in The Netherlands? The creators of identikit, soulless, functional houses? Does it even matter? All that mattered was that it connected, and connect it did. Of the two new songs that had been released in advance of their second album, only the pro-immigration banger Danny Nedelko featured in the setlist. It’s an undeniable anthem and was clearly written for the stage. With anti-immigration sentiment and the alt-right on the rise and increase, there’s a place for music to unite people, to bring people together. Limbs went flying and voices shrieked with euphoria as the crowd shouted along with the chorus in the sweatbox of a venue. It sounded as incredible and massive as you’d imagine on stage. The immediacy of the material meant that the newer songs have an intensive simplicity to them, making them accessible right from the first listen. While many bands struggle to get a reaction live out of new material, the infectiousness of songs like Samaritans get you into it right away. Their ability to create simple music with repeated value is an enviable trait and one easy to get wrong. Songs like I’m Scum, Love Song and Rottweiler all sounded amazing and did their bit to build the excitement for the new album even further. However, it were the tracks from debut album Brutalism that inevitably got the biggest response. That fraction of a second between the opening note of Mother and the point that the crowd realise what song is being played is a thing of beauty. The sudden look of satisfaction as the inevitable description of a mother’s working hours fly out of Talbot’s mouth is a sight to behold. Date Night and 1049 Gotho created an intensity that saw a mini-moshpit erupt. Though often an expression of aggressive masculinity, there was an air of respect and mutual appreciation amongst those involved, which is the way it should be. The band reciprocated the energy as guitarists Mark Bowen and Lee Kiernan made their way through the crowd with reckless abandon, the crowd helpfully freeing up their cables to allow them to wander. Though relatively sedate at the start, it wasn’t long before Kiernan showcased his signature moves with the sexiest struts that have been seen on a stage since Prince. Did Prince have that moustache though? No. Checkmate Rogers Nelson (RIP). The band have a real connection with the audience, and it’s hugely endearing. Whether it was Joe handing bottles of water out to the audience, or asking someone to hold his microphone for him for a second, he has an effortless charisma that had everyone hanging on his every word. Bringing a random member of the audience up to play guitar to give the band an opportunity to let themselves go is a beautiful little touch too. There’s no forth wall with these guys; they play to the audience, and they want you to enjoy it. As Rottweiler closed the set out in a cataclysmic mash of noise and dismantled equipment, I felt a real connection with this room full of strangers. In an age where hate feels like the default setting, and the plight of the individual is lauded more than ever, the importance of community is something to rally behind. Everything about IDLES captures that, it’s not looking for a common cause, just that we find ways to overcome our differences and move forward. There were no encores, and there was no need. Just a room full of sweaty people grinning from ear to ear at the sight they had witnessed.

All the images in this article are taken from the band’s appearance at the Rotown in Rotterdam one night prior to this show. New album Joy As An Act of Resistance is due in August.