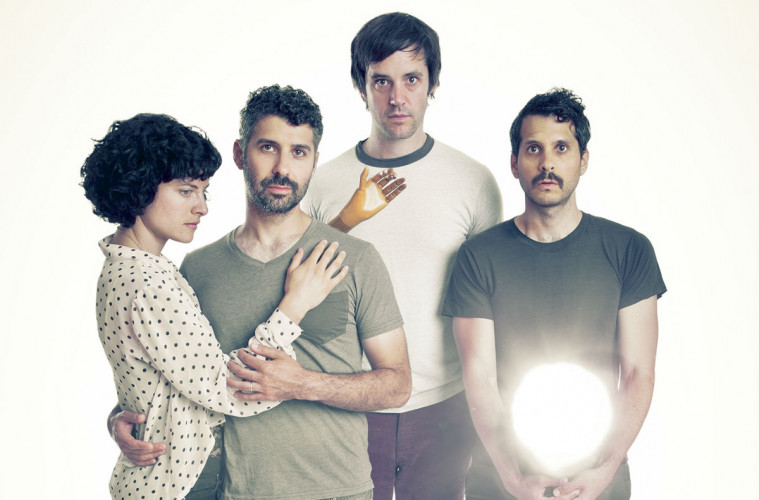 LIVE: WHY? Revisit Alopecia? Because It’s Amazing, That’s Why

Even though I hadn’t seen them in years, this was a WHY? show I’d fly to from anywhere. Ten years after releasing their seminal album Alopecia, and in honour of re-releasing the album on vinyl, WHY? announced a tour playing their most successful album in its entirety. The album transformed Yoni Wolf’s public persona from the Anticon founding cLOUDDEAD member to the unexpected frontman of a genre-defying indie-rock, alternative-hiphop band. The pop-seeds were sewn on previous album Elephant Eyelash, but the sheer ambition, originality and scale of Alopecia still came as somewhat of a surprise.

Serengeti opened the show at Amsterdam’s Paradiso, opening with some tracks from his latest album, the Andy Broeder produced Dennis 6e. Looking uncomfortable with his eyes hidden in the shadow of his baseball cap as he stood in the low lighting in front of his mic stand, he was accompanied only by his iPod-backing band. The set started fairly awkwardly, the audience seemingly unfamiliar with David Cohn’s back catalogue, with call and response moments mostly falling flat much to Cohn’s annoyance. By addressing the awkwardness between tracks with a humble attitude, the crowd began to warm to his beats and by the time he played Calm It Down from his collaboration with Son Lux and Sufjan Stevens known as Sisyphus, the majority of people were happily joining in.

WHY? took the stage as a four-piece for the night, each stationed in front of a plethora of instruments necessary to recreate the diverse arrangements that Alopecia contains. In place of the glockenspiels, the Wolf brothers used the more portable option of Roland drum pads to recreate one of the key instruments from the album. The days of having the budget to use grand pianos on tour are ones of the past. The opening notes of The Vowels, Pt. 2 sounded almost understated as Doug McDiarmid played a softer keyboard sound for its key-sound but by the time the rest of the band joined in the sound was fleshed and as it originally was intended. The awkwardly dancing hoards of introverts known as the audience responded in the only way the knew, shrugging in time proudly mouthing every lyric right back at Yoni on the stage. Well either that or “watermelon“, either would have done.

It’s easy to forget how much there is to the album when listening to its perfectly constructed studio version, but it’s moments like watching McDiarmid repeatedly mouthing “du du du du du du du du” at the start of Song of the Sad Assassin that reminds you how weird some of these arrangements are. Though the crowd response to Good Friday was clearly one of joy, the song is so low key that people struggled to find a reasonable way to express their joy at these decade-old uncomfortable confessions from Yoni Wolf. Yoni himself seemed to be in good spirits, lightly trolling the crowd with his German phrases before laughing off a false-start of The Hollows. His engagements with the crowd were short yet affable, clearly feeling the waves of air of positivity in the atmosphere. Touring as a four-piece may have limited his capacity to perform with just a microphone for any songs, but his ability to drum out the disjointed rhythms with other, different disjointed vocal rhythms was a feat to behold.

The arrangements stayed loyal to their original forms throughout with the one exception: By Torpedo Or Crohn’s, whose verses had been reworked to give them a more paranoid feel than the schmooze of the original. As the only song from the album to have received such a reworking, it came as quite a surprise yet sounded good in this new form. As the last notes of the final album track Exegesis played out, the band left the stage before returning for the encore. “We can play anything now” explained Yoni before Josiah interjected “We could even play the whole album again if you want”, though thankfully common sense prevailed.

The encore started with Moh Lean opener This Ole King which sounded exactly as per the recording, the live instrumentation setup likely to be the same as the opener of their album from last year. Though there were request shouts from the audience between songs, even the encore seemed predetermined, playing the same as in Copenhagen two days before. It was a pleasure to hear Crushed Bones next, making you wish that the band had embarked on a similar concept tour for Elephant Eyelash as well. The jerky rhythms sounded as fresh as the day they were recorded. For the closing song, Serengeti joined the band on stage for a rendition of Madeline from the 2016 collaboration between Yoni & Geti which Yoni inaccurately announced as “Testaclerossa”. “Strawberries!” came a shout from the crowd as Geti took to the stage. “Strawberries on your testicles? Never a good idea” was Yoni’s way of deflecting the request.

It was a great way to close out the show, with everyone playing together with Geti playfully distracting Josiah Wolf from his drumming during bits of the song where he had nothing to play. The last three songs served as a pertinent reminder that even though Alopecia may have been the creative high point of Yoni Wolf’s musical output, there’s still a hell of a lot more to the prolific musician in his numerous projects that he’s been involved in. With a promise to return to The Netherlands next summer as a closing statement, it’s good to hear that this moment of nostalgic reflection doesn’t signify the end of WHY?