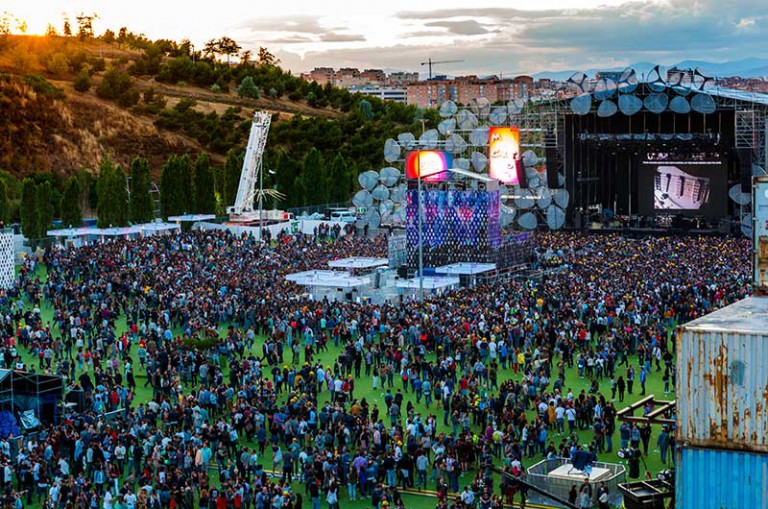 Five Rock Stalwarts to Check Out at Mad Cool Festival

Last year, a brand new festival emerged out of the vast Spanish undergrowth and popped up within the confines of the city’s Caja Magica: Mad Cool Festival. The cutting edge weekender takes place at the start of July, having celebrated its first edition with performances from the likes of Neil Young and Editors. This year, the festival returns bigger than before with a headline trio worthy of the world stage: Green Day, Kings of Leon and Foo Fighters. All three acts top a line-up which is equal parts exciting, huge and cutting-edge. Compare that with the picturesque and sunny Spanish conditions and you’ve got yourself a fine weekend. We’ve taken a look at the line-up and collated five acts definitely worth checking out in Madrid.

ALT-J
British indie trio alt-J have just announced their return in the shape of new studio album RELAXER, which is set for release at the start of June. The album is the group’s third and it showcases their ability to think outside of the sonic box whilst still remaining firmly rooted within it. Their live show may be less hard rock and more thoughtful and sparse, but that doesn’t mean it should stop you from lying down on the warm artificial grass with a cocktail whilst Joe Newman and co. serenade the Madrid masses.

FOALS
If you’ve ever been to a Foals show before, then chances are that you’re pretty well-versed in what to expect from Yannis Philippakis and co. The quintet, who are currently gearing up to put out a new album later this year, are a live force to be reckoned with and certainly not a band for the faint hearted indie fan. On record it may sound somewhat tamer, but once Yannis and his band take to the stage it’s more than likely that all hell will break loose. Keep an eye out for the rabid frontman towards the end of the set as he makes his way into the crowd, and hold onto your drinks before he makes you chug it in order to support his crowdsurfing abilities.

FOO FIGHTERS
Cast your mind back to 2015, when the nicest guy in music, Dave Grohl, ceremoniously fell offstage in Sweden and subsequently broke his leg. The band cancelled all of their appearances that summer, but now they’re back and ready to get straight down to business on festival stages across the entire continent. Mad Cool may not have even existed back when Grohl’s leg ceased to heal on time, but that doesn’t mean that the Madrid festival haven’t gone and booked one of the biggest bands of the year. For a festival in only their second year to snap up a headliner this monumental is a sight to behold, just like Foo Fighters’ live sets this year. Get ready to raise your fists in the air and go mental.

CATFISH & THE BOTTLEMEN
There aren’t many bands capable of rising from tiny clubs to massive arena’s in the space of three to four years, but Catfish & the Bottlement are certainly one of them. Their recent studio record The Ride has already achieved Gold status, having propelled Van McCann and co. the upper echelons of indie rock stardom in a way which can only be compared to the previous successes of Franz Ferdinand, Bloc Party and Kasabian (the latter of whom is still going strong). Whether or not we’ll see McCann and co. in stadiums this time next year remains to be seen, but Mad Cool Festival will certainly play a perfect host to the band’s infectious music.

CAGE THE ELEPHANT
Much like Foals, Cage the Elephant are a band whose meteoric live show can’t be avoided all too easily. Matt Shultz and his bandmates have a knack for causing absolute carnage onstage, with 2015’s Tell Me I’m Pretty turning it down a few notches on record but kicking it up a whole load on the live front. It’s not easy to keep an eye on Shultz’s whereabouts for more than five minutes, because the frontman tends to be all over the place. It makes for entertaining viewing, and it’s definitely a live show which you don’t want to miss unless your head is in the wrong place.

Check back soon for another Mad Cool Festival preview. The festival takes place from 6-8 July, and you can find more information here. Check out last year’s aftermovie below.