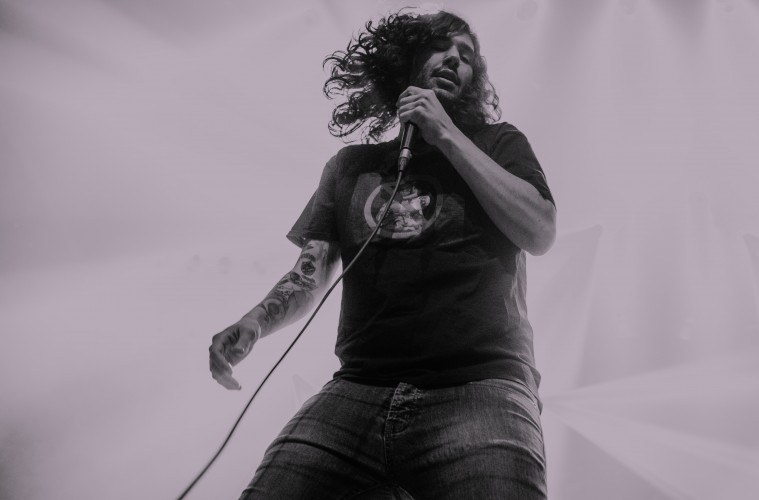 In the Pub With Real Friends: A Discussion On Social Media, Relevance and New Music

Last year, we took Dan and Kyle from Real Friends to the Dan Murphy’s Irish Pub in the heart of Amsterdam to discuss new music, touring and the impact of technology on today’s dynamic music industry.

Have you managed to take a walk around Amsterdam yet?
Dan: Yeah. I woke up at noon, felt like a piece of shit. Haha. I did 11 today and took a walk around a city, visited a toy store which was pretty cool.

It’s a lovely city to just walk around in.
Kyle: Absolutely, and we’ve been here before. We were here in March, like six months ago. We were in the smaller room of the same venue, and we got to walk around the city then too so it’s cool.

You just toured with Neck Deep. How did it go?
Kyle: It was amazing, we’ve had so much fun and the venues are huge. You don’t tend to realize how big Neck Deep are until you get here, with all the huge crowds and the radio play and stuff. Which is awesome, because there are so many people at these shows who had no idea who we were. That’s great, because everyone benefits from their newer popularity in a different demographic, with people who don’t know all these bands. It’s been pretty crazy, and it was pretty wild too.

Do you notice considerable differences between crowds in the UK and Europe, as well as back home in the US?
Dan: It really depends which city you’re in, because it’s the same here in Europe as it is back in the States. Some people prefer to stand and take it in, and other times people are off the walls killing each other and it’s anarchy! Dan: Nottingham. We got a full set though, so we played!

Kyle: That show was actually great, and we thought that it was one of the best shows on the tour so far.

Dan: Had Neck Deep played, then it would’ve been chaos. I wasn’t there when the incident happened, as I was down at the merch table.

Kyle: I was at Taco Bell.

Dan: It happened at the beginning, so I was just chilling at the merch table when I went to go have a smoke. Next thing I know, Ben from Neck Deep is walking past me. I thought to myself, “he’s supposed to be playing right now”.

Your most recent record is now nearly two years old, which is quite a while. How’s the campaign panned out?
Kyle: It’s been good. I mean, it was cool to have a new record out and do a full US tour in support of it. We did Warped Tour as well, and that was kind of the beginning of it back in 2016. We’ve been here on tour, and it’s all been cool and it’s been giving us some fuel. We’re definitely excited to work towards the new album next year, and once this tour is done we’re going to go home and wrap it up early 2018.

Will you be approaching this record differently to its predecessors?
Kyle: Umm, it’s tough to say exactly. As of right now we’re just focussing on trying to evolve. From the songs that we have right now, there’s more of an energy. We’ve always been an energetic band, but on these songs it’s become something that we’re trying to bring out a little bit more. As of right now, though, it’s a little too early to say.

What about producers? How did that pan out on previous releases?
Dan: Everything up until this past record we’d self-produced, and then on the new album we had a friend an hour away from us in Crown Point, Indiana. We were in Chicago, and he had a studio which we would go and visit him there. He would always have new things, new gadgets and toys, programmes for us to use. Then he renovated it and turned it into a legitimate business space, so to say. It was just us and him, and he would hit record and we’d take care of the rest.

Kyle: We didn’t even hear a lot of the songs in full until we were actually done with recording them, which is quite a new thing for us. It’s really organic, but I do think that it’s healthy to trial new things. On the last record we did some co-writing and it was the first time that we were produced. It was cool to mix things up a bit.

Now that you’ve done both, would you say that you have a preference leading into a certain direction? What worked out better for you?
Dan: It’s hard to say, ’cause I feel that the combination of the two would be wonderful. When we were self-producing, we had a lot less time to work on the music and it all felt a little bit rushed, but being produced gave us more time to work on the songs and put everything together. If the time management we have now worked with self-producing, then we’d have something totally great. We’re always trying things out, and things are always changing behind the scenes before we even take the songs to whoever is recording them. We’d still do a lot of producing on our own. In the case of producers, would you have some sort of wishlist of people you’d love to work with at some point in the future?
Dan: I don’t know, because I don’t know who is available to do things like that.

Kyle: For us I think it’s not so much a list of people, but more doing what we’re doing and evolving our sound. It’s more about the record as a whole than who we’d work with.

I want to talk a bit about relevance, for lack of a better word. You just talked about Neck Deep and the good they’ve done for the pop punk scene, but do you think bands like them have given the pop punk scene a breath of fresh air?
Kyle: I think Neck Deep is a really good example of this. I wouldn’t say relevance, because I think pop punk is still really relevant in its own world alongside mainstream artists. I think that Neck Deep are really opening it up, especially over here where I think they’re even bigger than in the US.

Dan: I wouldn’t necessarily say making it relevant; rather, I’d say solidifying it. I think that there was a dead period in the mid-2000s after Drive Thru Records and all those bands got fucked over, but bands like Set Your Goals, Four Year Strong and The Wonder Years were sort of the main three who got people’s attention again. After them, bands like us, Neck Deep, State Champs and Knuckle Puck helped to reel it in.

Kyle: Neck Deep are currently doing a lot. Pop punk is such a community thing, and they’re doing so much in introducing us to people who have no idea who we even are. Now, everyone knows Neck Deep and everyone knows us too. It’s different, but in a good way. They’re expanding this pop punk scene.

I was looking at your Facebook page yesterday, and I read a post you made about Facebook reach. Bit of a curveball topic, but do you think that social media has made it both tougher and easier for bands to reach their fans?
Dan: It’s a big when and where, to be honest. I fucking hate Facebook, I think it’s terrible. I haven’t had one for like three or four years now, but it’s something which gives you so much access to all these millions of people around the world. Then again, that also gives all of those people access to everyone and everything. Everyone has the same access as you do.

Dan: Oh. First it did help us, but I think that’s because we caught it at a time where it was just about to pick up and snowball. We got lucky, but for bands now I’d say it’s probably a lot harder. There’s so much everywhere, such as Spotify, YouTube and Apple Music, for people to discover us. There’s all these outlets and things you have to keep track of, and it’s to the point where people expect things to be handed down to them. It’s to an extent where people don’t even know how to find ticket links on their own, so you have to spoon feed them things and be like, “Hey! Here I am! I’m in front of you, look at me!” The next day, there will be someone else doing the exact same thing to the same people.

Kyle: We did indeed get into Facebook around a time where it really picked up for bands, and there was even a time where it was just our number one focus in regards to social media. That was back in 2012 or 2013, when it was literally all Facebook. Twitter wasn’t updated that frequently, and that was in a time where everyone who liked your page could see everything you did. Now, it is tougher for people who want to start a band. There are so many restrictions, and it just makes things a lot harder. We used to post things on Facebook that would be viewed by 100,000 people on average, and now you post something and there’ll be 1,000 people who see it. We have over 300,000 Facebook likes!

Which makes 1,000 people such a tiny percentage.
Kyle: Yeah. But, y’know, it’s all business at the end of the day. That’s the way that it is, but I’ve learnt now that you need to evolve with social media as a band and embrace it. Now we lean more on Twitter and Instagram, and even stuff like Snapchat over the last six months. It’s just this ever-evolving thing, and for a while it was the same with MySpace. That was all you needed at the time, because it was this one-stop place where you could post your music, fans could interact and you could share your tour dates. It was like a proper website for a band. You could make it look cool and stuff. Now, with all the different forms of social media, it’s tough but you just have to evolve with it. And we do our best.

Exactly. Thanks for your time!
Kyle: No problem man!

Real Friends’ new album is expected later this year. Stream 2016’s The Home Inside My Head below.