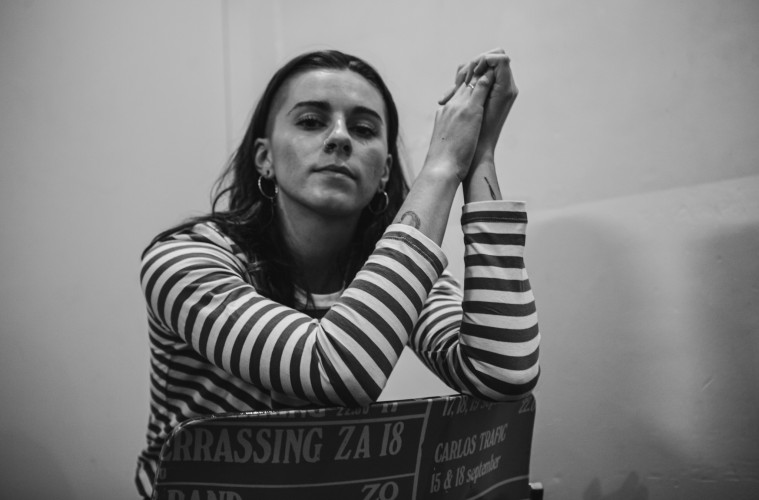 At the weekend, alt pop trio PVRIS returned to the Melkweg in Amsterdam for their fourth appearance in the Dutch capital since 2015. Since their last stop in the city (May 2017), the Lynn Gunn-fronted outfit have been around the world and back with a brand new EP – Hallucinations – to boot. It serves as a teaser for their third studio album, which is currently in the works. Anieck van Maaren sat down with Gunn to discuss the future, inspirational women and LGBTQ+ representation.

Hey Lynn! How has the tour been?
It’s been really good. We just played in the UK, and Amsterdam will be our first show of the tour in mainland Europe. But it’s been good. I’ve had a lot of vocal problems over the last two years and pretty much had to relearn how to sing. Now it’s finally in a really good spot and I’m not terrified to get on stage anymore, so it’s been nice to be excited and feel less anxious to perform. I’m actually present and enjoying it.

How did your vocal problems come about?
I’m not super sure. I think it was a combination of constantly being on the road, not resting, and periods of anxiety. Anxiety can really destroy your vocal cords. I started working with a new coach this year, and he saved my voice for sure.

You’ve mentioned that, for your new album, you were moving in a new, more pop-driven direction, and that you were starting to unveil a much cheekier side of the band. How has the reaction been?
I feel like not all of it has fully been shown yet! The new music is still really dark, and there’s still a lot of heart to it, but there’s quite a few little winks thrown throughout. Humor’s always been a big part of it for me, the boys and our entire touring camp. We constantly joke around and play pranks on each other, but we’ve never shown that side of ourselves. Once you hear the music, you’ll see.

How would you say your inspirations have changed from your last album to the upcoming one?
I don’t think my inspiration has necessarily changed; I think my perspective has changed. I’m still inspired by a lot of the same things, and it always sources from some kind of longing or sadness or frustration. I don’t know if I could ever write a fully happy song. It’s definitely inspired by those three components, but it’s just dressing it up differently and experiencing these emotions and situations in a different perspective and a better headspace. That’s where the winks come from. It’s like, I’ve been through this, and I know how it ends right now. I know that the world is going to continue turning, so there’s a little bit more hope.

When previously talking about songs that change your life, you mentioned artists like Enya, Florence + The Machine and Daughter. How have these women influenced you in your career path, and how has that transcended into what PVRIS became?
I think it’s mostly been two components: the method in which they create, and their philosophy with creating, which is very much like; you’re a vessel and you’re channeling something that’s bigger than you. I’m just lucky to capture whatever I’m capturing right now and be able to translate it into something. I’ve always thought that philosophy is really beautiful and there’s an ethereal magic to it, which I think translates a little bit into the music for sure. There’s a book called Big Magic by Elizabeth Gilbert and it’s her philosophy, too. It’s like, you’re not a genius, but you’re capturing the genius and new ideas, songs or lyrics you’re creating and your only job is to be as open as possible to receive and translate them.

Who has inspired you so far in 2020?
I have recently been obsessed with Tommy Genesis, she’s great! I like this artist Cobra, and also the new Tinashe record. And I was obsessed with Euphoria, so I’ve been jamming a lot of Labrinth. I’d say those have been my personal top of the year. When it comes to the album, we’ve been referencing a lot of St. Vincent, Jack White, The Weeknd, and Kanye’s Yeezus album. Those were our top four references for what we wanted to do sonically. If we put those four in a room together, what would it sound like?

You are one of the most visible women and LGBTQ+ artists right now in what is very much a male-centric industry. How does it feel to be an example for some of those young LGBTQ+ fans in the audience?
It’s very scary, because I’ve never seen myself that way. Most of the people that made me feel comfortable coming out and coming to terms with my sexuality were involved in the community in a more underlying way, which is the role I want to have. Other than being open, I want to facilitate and do things like what we do with our tickets, we donate percentages. I think I want my role to be normalising it. I want to make sure everybody feels included at our shows, no matter your gender or sexuality. I want our shows to be a safe space for everybody and I don’t want our band or audience to just be labeled. I think it’s especially important for our queer fans to realise that being gay, or wherever they fall under the umbrella, is really special and amazing, but that there’s so many other amazing parts of them that they should also be celebrating. They should feel that they can identify with and feel empowered by everything.

You may have heard about The 1975’s decision to stop playing festivals whose lineups are not diverse enough when it comes to male and female or non-binary artists. What do you think of that?
I think it’s great! It would be awesome to see more artists step up like that. It’s quite frustrating that there’s still such a big gap, because there are so many female-fronted bands and female or non-binary solo artists that should be pushed. I’m glad The 1975 are taking a stance.

So what are your hopes for the rest of 2020?
I hope that our tours do well, and I hope that people enjoy our album which will be coming out in 2020. I just want to enjoy it and be present and have fun and not stress out too much, because my goal for 2020 is not to stress so much anymore. This is a really fun and special thing that we get to do and it’s time to take the pressure off and just connect and have fun. Hallucinations is out now.