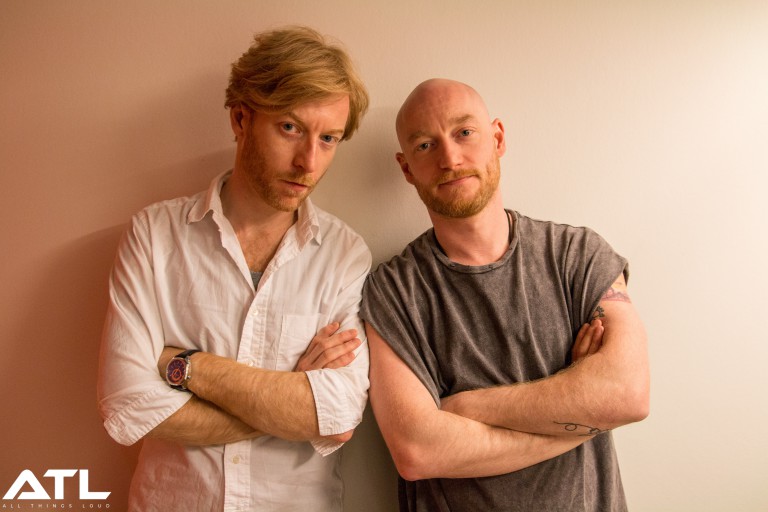 Earlier this month, Scottish trio Biffy Clyro presented Utrecht with cuts from their new record Ellipsis. The Simon Neil-fronted band finally find themselves atop a musical landscape which they’ve slowly but surely been dominating for the last few years. We caught up with bassist James and drummer Ben Johnston ahead of their sold out set at the TivoliVredenburg to talk touring, A$AP Rocky and the relaxed American state of mind. Hey guys. How’s the tour?
James (Johnston, bass): It’s going great! It’s been a while since we did a headline tour through clubs in Europe, and right now we’ve got about one week left. We’re really in the swing of things.

James: There you go. That’s nice! It’s the first proper tour we’ve done for this new record (Ellipsis), because we went straight into the summer festivals. We’ve been on the road for fifteen years, but we’re still learning a lot. It took us a few gigs to get back into the routine of playing in smaller clubs for up to two hours a night, building up that stamina as well.

Ellipsis came out in the summer. As a record, it sounds different to previous releases whilst still carrying that ultimate essence of what Biffy Clyro are all about. How did the record come about?
James: I think that we’ll always maintain the thought process of a guitar rock band, but we felt like we really wanted to change things up on this album. We did three records with one producer, then we did the next three with Garth Richardson and now it feels like we’re starting the next trilogy with Rich Costey. We’re almost trying to forget the things that we learnt before, and we’re now trying to tackle new ways of writing and recording. It feels quite different this time. On the first day of recording, Rich came in and started pulling bits of Ben’s drum kit away and telling him to make more use of the kick drum with his left foot. Ben was really impressed by that, and I’ve got some pictures and videos on my phone of Rich and the other engineers reacting to Ben trying to hit cymbals that weren’t actually there. Like, “how the fuck do you expect to keep time like that?!” So right from the off we knew that things were going to be different, and this continued on during the recording process. Every day, we felt different and didn’t know what we were even going to do in, say, the afternoon. It was just a really exciting time.

And would you say that this is what Rich Costey brought to the table?
James: Yeah. I mean, I knew that we wanted to make a change so that’s why we engaged in his services. Rich feels like a lot of rock music can become stale or boring, almost looking back at the past and referencing the classics like AC/DC and Led Zeppelin. We wanted to look forward, and Rich is really into modern recording techniques. We tried to bring in the sounds of modern hip hop records a little more, too.

Would you go further and complete the trilogy with Rich too?
James: We’d love to!

Ben: It was a fun record to make, and I think we ended up making a great one. It was way more explorative studio-wise, and I think we’d like to continue down the vein of going into a studio with songs but with not all parts worked out. We’d basically just like to let the studio speak to us and have us experiment. We also want to stay current and modern with the techniques that we use, instead of emulating AC/DC and stuff.

James: We do still use some old stuff, though. Like, we use a tape machine and old microphones. We don’t want to disregard the things that we learnt in the past, because that would just be useless. We’ve always been quite against things like using too much reverb, or the little stuff that is used to help enhance a record. On Ellipsis we embraced this, though.

The record was recorded in LA. How much of an effect did the relaxed American mindset have on you in the studio?
James: It probably makes us more uptight, haha. The songs were already written at home, and we all knew about their performance and their parts back then. LA wasn’t really a huge influence on that; rather, it was more the frame of mind that people have there as opposed to the more guarded and cynical outlook people have in Scotland. That juxtaposition was nice to have, but it didn’t change who we are as people. It obviously changes the way you are at a particular time, but nothing influences it.

Ben: Like you said, it’s about being in a certain place. In LA, you can have an idea and follow it whereas in Scotland you’re surrounded by Scottish people or things like bills to deal with. You’re still in that mind set of being at home, and so it’s good to get out of your house for a while. It seemed more realistic to be in LA for your dreams to come true.

Amongst your influences for Ellipsis you mentioned the likes of A$AP Rocky. Where does that particular influence come back on the record?
James: That’s definitely more of a textural influence, as in how these records sound. His records are very sparse and have very little on them in the way of depth. The track Rearrange is probably the closest that we got to emulating this, by using stuff like trap beats.

Ben: That was a bit more down the hip hop route, yeah.

James: We had clean guitars, sparse drums and put everything through a Marshall amp.

Ben: We avoided using loads of distortion and having this clichéd fucking rock ‘n roll amps, so the hi hats in the chorus crashed out. We didn’t have a blueprint or go-to move, which is something we were trying to get out of. There was some butting heads with Rich about what did and didn’t sound right to us, so it was about trying to break that mould.

So with songs like Rearrange and even Small Wishes, is that a direction you’d want to explore more?
James: We’re always going to be a guitar rock band, there’s no doubt about that. We’re not trying to shake that off or completely change who we are, we’re just trying to develop. That’s thus a road that we’d like to go down more, but the record has only been out for six months.

Ben: Nothing’s off the table, but nothing’s firmly on it either. We feel like we can do what we want.

James: It feels like we can set a framework for the next trilogy, if you like. The work we’ve done with Rich is what we’ll mainly stay within, but we’ll also venture out of that at some point too.

Ben: If you look at Puzzle compared to, say, opposites, you’ll see that there’s a huge difference as well. The idea is that this is a different chapter with some more modern sounds on it, but that doesn’t mean that we’re only gonna be making RnB and country songs. I wanted to ask you about Puzzle, actually. Next year marks since 10 years since it came out, but how do you feel about that record looking back on it now?
James: Still feel really proud! It was quite a big turning point in our lives, with moving to a major label and all that. We got to go to Canada for the first time, and we recorded there for almost six months. It almost physically killed us, and it made us realize how to make a big sounding, grand, lush and orchestrated record. We’re still really proud of it, and that goes for all the records that we’ve made. Some bands get to a stage in their careers where they start to disown their previous work.

Have you got any plans to commemorate its anniversary next year?
Ben: We’ve not got any plans necessarily, but we did really enjoy the Barrowlands shows where we played each album from start to finish. I don’t know if we’ll do anything to commemorate Puzzle next year, maybe after the album or something like that. We love playing those songs, and we love getting hardcore fans in a room and giving them what they want to hear. Quite often that’s rarities and B-sides.

James: We try to play as many old songs each night as we can, but now that we’ve got a new album out we’re mainly focussing on that.

Next summer you’ll be headlining Download Festival, which is a massive achievement. This year, there was a lot of discussion and debate surrounding Muse’s headlining slot. How will you approach your headline set? Especially considering the nature of Download visitors.
James: We can’t suddenly rewrite our songs or become a different band, so we have to just go in there and be the best version of ourselves that we can be. We’re looking forward to the opportunity, and we’ve always felt like the underdog or the outsider for sure. It’s not an unfamiliar feeling to us, and we quite relish the idea of proving any doubters wrong. There are always going to be people like that, though. We’re a heavy rock band.

Ben: I think we can rock as hard as any other band, to be honest. Even a song like Many of Horror, which is considered a ballad, really has teeth and rocks live. The only songs that don’t ‘rock’ are the likes of Rearrange and Machines and a couple of others. The naysayers will be surprised by how heavy we are live.

James: It’s also a very macho and testosterone-filled arena, rock music fans. There’s a lot of flexing, and I think that if you play a ballad to these guys they might open up and get quite teary. We did that once and a lot of guys started singing and crying their eyes out.

Ben: Metal fans are probably more open-minded than they give themselves credit for, to be honest. You’ll always get this at a metal festival, it’s fine.

I just want to focus on the fact that you two are brothers. How does this brotherly bond work within the band, and has it helped in tough times?
James: It’s second-nature by this point, but I think it works well. That Ben and I have a strong bond really helps within the band. I don’t think it would work if there were fractions in that regard. It feels like a standard dance, and it doesn’t feel any different. We’ve only ever been in this band since we were young, and I’ve never played with any other drummers. I’m not even interested in playing with any other drummers, I don’t want to know what that’s like. I think we’re lucky to have that connection. Famously, siblings in bands can often cause issue.

So it’s definitely helped at tough times?
Ben: Yeah, it’s always great to have family in there as opposed to people you’ve met elsewhere. When they start facing tough times, you don’t know how they’ll react. If it’s family, though, you will know as you’ve been through a lot of shit in the past before with each other.

I know it’s early days, but I just want to focus on 2017. I take it you’ll mainly be touring?
James: Yeah, we’re coming back out to Europe again at the end of January through to February.

Thanks for your time!
James: No worries, thanks!

Ellipsis is out now.