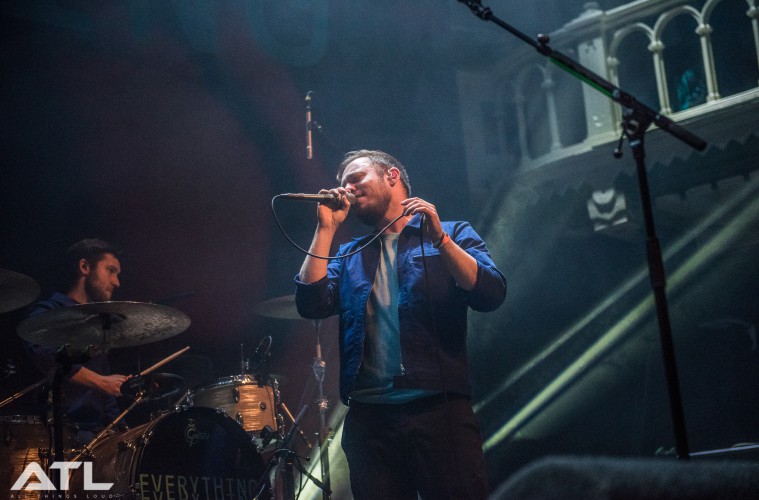 Back in 2015, British electro-poppers Everything Everything put out the critically acclaimed Get to Heaven, their third consecutive Top 10 record in the UK and their most forward-thinking collection of music to date. Now, two years later, Jonathan Higgs and co. have returned on the immaculately crafted A Fever Dream, a record set to take them to the next level once more. We called up drummer Michael Spearman ahead of their show at Amsterdam’s Paradiso to discuss the record, posing him five key questions. Everything Everything, live in Amsterdam. (c) Linde Dorenbos

Can you tell us a bit about the transitional period between finishing up Get to Heaven’s campaign and kicking off A Fever Dream?
We tried to not stop for too long, we really wanted to carry on. Get to Heaven initially felt like a risk, but we were happy with how it went so we just chose to continue. A Fever Dream is musically much darker, but lyrically it’s less the case. I think it was just the next logical step. A Fever Dream is more about the emotional fallout of things and the confusion it causes. I don’t think we really wanted to stew too much on making it.

Was there much difference in your approach compared with Get to Heaven?
I don’t think there was much difference, really. We had less problems on A Fever Dream, so it ended up being quite a smooth process. We also enjoyed having James (Ford, producer) in the mix too. He was an extremely laid back, calming influence. The record was almost done before he got involved, though. James is a great influence, and he’s very good with recording specific things like drums. We worked on the album in Liverpool as well as the Oxford countryside, and you can hear a little bit of influence from the latter. The only difference on this album was that we allowed ourselves a little more time to express another, more serious side of us. A more melancholic side, too. A Fever Dream is more about textures and moods, and we thought that was something we could do.

Get to Heaven was extremely well received. Did you feel under any pressure to surpass it?
Yeah, I think so. But then again, we always put pressure on ourselves to make the best record that we can. We were really surprised and happy with how well Get to Heaven was received, and wondered if we could it much better this time round. We essentially wanted to make a new record on different terms, just to keep it interesting. If anything, the success of Get to Heaven opened up more doors for us and helped us move up a level in many ways. We see it as positive thing! Things move very fast in this day and age, and you really have to try and keep up to make something have a lasting effect on people, which you know they’ll enjoy as opposed to forgetting a week later. We played in Paris last night, and it was by far our best ever French show; everyone knew the lyrics from the new record just as much as they did the old stuff. We’re very grateful for that.

A lot has happened in the world since A Fever Dream’s predecessor came out. What, if any at all, effect or impact did it have on how you approached this record?
We didn’t want A Fever Dream to be too much of a current affairs type record, because these days everyone has their opinions and platforms to express them on. Instead, we looked at the kind of world that we’re in. It was less about the world globally, and more about how we feel in these fast-changing times. There are worrying things going on in the world, and A Fever Dream is our emotional response to that; we’re asking questions about how we should feel and what we can do.

When we last spoke to you, we discussed Get to Heaven’s extreme art direction and visual ideas. What did you have in mind this time round?
On Get to Heaven, we wanted something that was very vivid. We were talking about these big characters, and it was well before Trump was even on the scene in a major way. Think people like Gaddafi and other dictators or megalomaniacs who get whatever they want and can do whatever they like. The record had no subtlety and lots of big messages, whereas A Fever Dream is far more subtle and generally focuses on living, breathing people. The cover has people twirling, but which way is up? We just wanted the artwork to suit the sound in an aesthetic way.

A Fever Dream is out now, and you can stream it below.