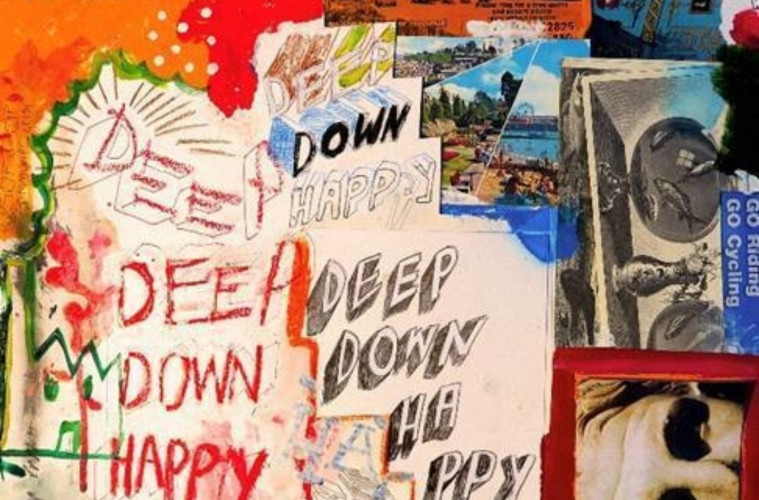 There’s no bolder move as a band than to kick off your debut album with a song sung by someone other than your frontman. And yet Sports Team went there on Deep Down Happy, the strongest indie (and debut) album to come out of Britain since, well, Arctic Monkeys perhaps? Alex Rice and co. have never been afraid to break genre convention and be reckless, whether it’s musically or simply just hosting a chaotic gig at their local pub. They’re the UK’s answer to each and every single pastiche indie band of the last fifteen years, and despite Deep Down Happy landing in the middle of a global pandemic it’s safe to say that Sports Team’s time has come.

As debut albums go, it couldn’t have a bolder start. Lander features lead vocals from guitarist Rob Knaggs, a jarring move for most listeners who’d have expected the charismatic Rice to take control from the off. It’s an upbeat mesh of gritty guitars and uptempo rhythms which sets the bar high for a record which never slows down. Roughly half of the record had either been released in the past or existed in another form, with the one-two of Here It Comes Again and new single Going Soft going hand in hand. The former is a top of the range indie anthem, complete with nostalgic guitars and Rice’s storytelling, with the latter’s chorus so catchy and memorable that it puts other bands to shame. A re-recorded version of debut EP cut Camel Crew also features, its fresh, polished sound by no means detracting from the brash impact it had first time round. Rice’s emphatic “You say it’s boring, but it’s not” is as still goosebump-inducing, and the build-up which precedes it still carries the same tension.

Long Hot Summer is the second of two tracks featuring Knaggs on lead vocals, taking a slight step back in terms of energy and shifting the focus more towards lyrics which touch upon homesickness, feeling lonely and out of place in your surroundings. “I’m not sure what I’m waiting for, and I’m not sure that I care” drawls Knaggs during the chorus, his voice filled with a sense of hopelessness. His voice doesn’t feature much on the rest of Deep Down Happy, apart from during the manic ending to album highlight Here’s the Thing. It’s as quintessentially Sports Team as it gets, ticking all the necessary boxes (energy, quirky lyrical references, riffs) and doing so in style. Rice’s voice is filled with vibrance and sass, hitting all the right spots during a slew of accurate social commentary. Here’s the Thing also features the best Sports Team lyric to date: “Jesus loves you, but football’s coming home” (no disputing it). Fishing and The Races sound as fresh as they did when they first came out last year. The former’s a high-octane cut about fishing in the Thames, while the latter is lathered in the same social commentary which made Here’s the Thing so strong (only with more bass). There’s sadly no space for fellow 2019 cut M5, which had its own moment in the spotlight on EP Keep Walking! last year. In fact, nothing from the band’s second EP makes it onto Deep Down Happy.

Kutcher is another old school track which snuck its way onto the album, its spot rightfully earned thanks to Rice’s comical and Hollywood star-referencing lyrics. In and amongst a mix of riffs and chugged guitars, he muses about haircuts and washing machines like it’s no biggie. But then that’s part of Rice’s charm; he can make the most mundane activity sound like the best thing in the world. He reaches similar heights on the bubbly Born Sugar, one of the record’s unreleased highlights. Like most of the album, it’s Sports Team by-numbers, but don’t let that take anything away from the excitement. The same goes for Feels Like Fun, which should go down a treat once the world reopens and Sports Team can return to the stage. Album closer Stations of the Cross sends the band out with a bang. It’s a ball of fun which contains non-stop energy and a sense of euphoria you could only feel after listening to a debut record as strong as this one. It’s the perfect send off for an album which has been a long time in the making, and which will stand tall as a powerhouse debut album for an even longer time. Sports Team are the best band to come out of Britain in years, and with a record of this calibre it’s safe to say there will be no avoiding them in the years to come. Deep Down Happy is out tomorrow (5 June).