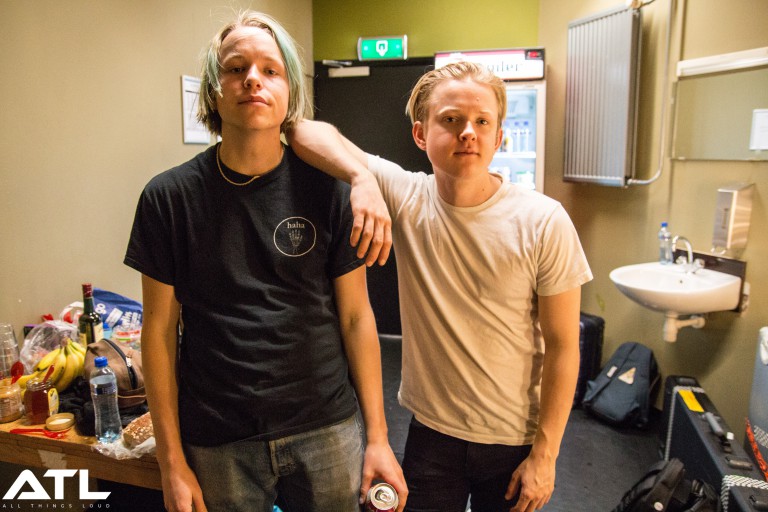 The brotherly bond in music is something which has time and time again proven to be unbreakable, no matter what life throws at you. And in these tough times, family is often exactly what you need to get through thick and thin. Cole and Max Becker are a prima example of the strong family bond in music, with the pair forming the strong core of Cali punk quartet SWMRS’ nucleus. We caught up with the brothers when they rocked through Amsterdam earlier this year on a short tour with All Time Low.

Hey guys. How you doing?
Good thanks!

Have you had any time to explore Amsterdam yet?
A little bit, yeah!

Alright. Last year you signed to Fueled by Ramen. How did that come about?
Umm, so we put our album out by ourselves and then toured a bunch. People liked it and there was some label interest, and then our tour manager ran into someone from the label when he was out at SXSW with another band. They got talking, and then we met with them not too long after. They’re super cool people, and during a full tour we did of the US there were five different FBR employees from five different offices who each came to a show to check us out. By the end of the tour they just started offering it to us.

It was never gonna be anyone else then, right?
Well, there was actually one other label that was talking to us too, but Fueled was definitely the better fit for us. It was a better deal, too. At the end of the day we weren’t really looking to sign for a major label, but Fueled by Ramen has such a huge infrastructure and has always been run in the exact same way. They’re basically just a DIY label in a bigger office with more money.

You’re also label mates with All Time Low. How’s the European tour been? And how has the UK compared to Europe?
It’s awesome! To be honest, UK crowds are tight, and sometimes they’re a lot better than US crowds. Just based on what we’ve played since the UK, I’ve gotta admit that Europe is also a-mazing.

SWMRS is the perfect example of a crossover genre band, mixing elements of indie with punk. On one hand you’re signed to Fueled by Ramen and toured with All Time Low, but on the other you’ve also toured with the likes of Twin Peaks and appeared at Beach Goth. What specifics do you like about each end of the spectrum?
What’s cool about touring with the indie bands is that you pull crowds with older and rowdier kids. That’s older as in 20, because All Time Low fans are between the ages of thirteen and eighteen, I guess. It’s mostly girls, too. Playing with All Time Low is great because you get all these young fans who are extremely passionate about your music and know all the words. All the kids at these indie shows are the rowdy ones, so at our own headline shows you get this passionate ordeal filled with loads of energy.

Do you try to incorporate both sides into your music as well?
Yeah! Absolutely. When you tour with indie bands like Twin Peaks, there really is so much that you can learn just about taking music as this ancient craft of pure songs. Sometimes indie bands can get stuck in purism, whereas bands like All Time Low practice showmanship as well as songwriting. To see both sides is great, because sometimes you can really get bogged down by purism instead of working on making it a show. On the other hand, bands closer to All Time Low can sometimes focus too much on just the showmanship and forget about the craft of the song.

Do you personally have a preference?
I do, because you kind of take the best of both and that’s your preference. Music-wise, we just love indie music and listening to it. Career-wise, though, it’s the showmanship side for sure.

What kind of stuff have you been listening to lately?
Do you know Toys That Kill? We’ve been listening to a lot of Recess Records stuff, and I also like Slaves a lot. They’re crazy. I’ve also been a fan of Cloud Nothings for a while, as well as the Spanish group Mourn. All across the board, to be honest. I’ve been really into a band from Oakland called Culture Abuse, too.

Your drummer Joey is the son of a famous musician, Green Day’s Billie Joe Armstrong. Do you think that connection has helped you a lot, or does it stand separate from SWMRS?
For us growing up and seeing a band like Green Day do what they do, it really sets the bar high. It makes you really hungry for success, which I think has been really helpful to us. Other bands don’t get that up close and personal with bands like Green Day, whereas we do. It just shows that you don’t have to give up on the songwriting and actual musicianship, because they’re one of the biggest bands in the world and they still just simply write the songs and play the instruments. A lot of bands think that you get to a certain level and then start dropping stuff off to perfect everything, and you end up not trusting yourself as a songwriter anymore. You end up making a bunch of people in LA write your music, when in your reality your music gets worse and you end up having a shorter career.

A band like Green Day has never drastically changed their sound in the past, and it’s always had a strong basis. How do you see your sound progressing in future years?
We’re a little different in that we started out when we were ten years old, so in that sense we’ve already changed a lot. I was listening back to our stuff from twelve years ago recently, and to see how much we’ve changed yet retained our soul is pretty cool. We grow as humans, and we also get bigger in our heads. We’re taking more stuff in so that we have more at our fingertips, but the soul still lives on. The way Billie Joe writes a song is pretty similar to the way in which we write songs, and it’s just like there’s a writer inside of you who takes in everything that you see and hear. When you’re feeling inspired, the writer inside of you comes out and writes a song. For us it’s much more manic, because we have stuff like Spotify and it enables us to listen to hip hop and rap and whatever else alongside rock. All of this is feeding the writer inside of us, and I think it’s played a part in how we became more of a crossover band. Which is cool! It’s less defined, but it appeals to multiple people too. We’re not a specific type of person.

So what can we expect from SWMRS for the rest of 2017?
Well we’re coming back to Amsterdam in September to kick off our headline tour at the Bitterzoet, which we can’t wait to do!

SWMRS’ new record Drive North is out now. Get tickets for their show at the Bitterzoet here.