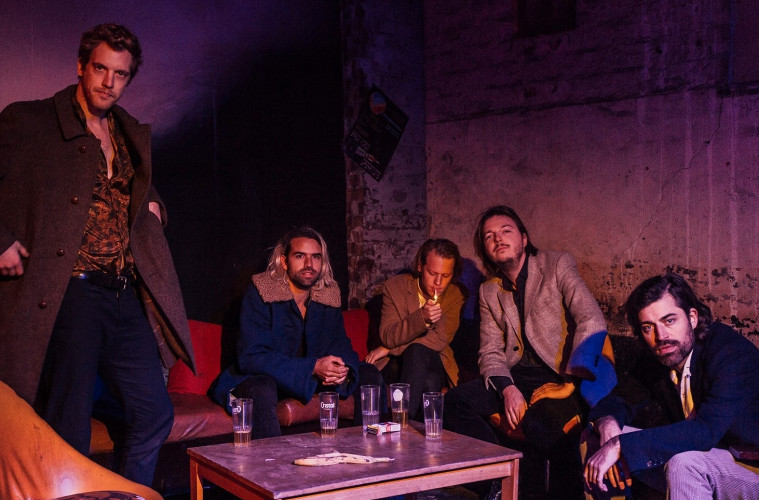 Later this week, Belgian quintet Balthazar will release their long-awaited new album Fever. It’s the first collection of music to come from the rejuvenated Kortrijk collective since 2015’s Thin Walls, and it marks the start of a brand new chapter in the group’s life. The four years between records have seen most of the band undertake solo projects and other endeavours, and to an extent it almost felt like a necessary change of scenery for a band who were in danger of becoming a caricature of their own past. We caught up with co-frontmen Maarten Devoldere and Jinte Deprez to discuss new music, keeping up relevance and what the Balthazar band dynamic is like anno 2019.

Hey guys. How are you?
Jinte: I’m fine, thanks!

It’s been almost four years since Thin Walls came out. Talk me through the time between that campaign and where we are today, what’s changed in Camp Balthazar?
Jinte: First of all, it doesn’t feel like it’s been four years. We toured Thin Walls for quite a while, and we’d been on the road until the end of 2016. I think the whole point of having a break was that we felt too well oiled and in a certain routine. It felt too predictable for ourselves, almost too dangerous to make a fourth album and not repeat ourselves. We’d desired solo work and experimentation a little bit, so we took the decision to take a step back from Balthazar which was cool. It was a carte blanche for us, we could experiment. Tours were in small clubs again and it felt very refreshing, almost like we’d had some sort of creative oxygen. We did that, and it was quite – to our surprise – successful; you never know when it comes to solo stuff. Then we heard each other’s solo albums, which was also really surprising. It was cool to see that you can still be very surprised by what you’ve created. When I saw Warhaus (Maarten’s solo project) I thought, “Wow, you talented motherfucker”. That feeling was mutual, because otherwise we’d have a problem, haha. Towards the end of those campaigns it was always the plan to make a new Balthazar album.

When Thin Walls came to an end it felt like we’d all taken each other for granted. Coming back together gave us the feeling that we have a new start, very collective. The solo projects were very personal to all of us, so when you come back together there’s a new collective energy in the air. Fever is more extroverted in that sense, because it’s more energised. It’s a danceable album, and that’s a response to the solo work.

So what impact did this have on the way you approached Fever?
Maarten: The solo projects created a clean sheet for us both. You’re not working in that well-oiled machine anymore and you start to discover a nice place in the beginning. That was really eye opening for us, that mentality which we could bring to Fever. When we started the album it thus felt like a clean sheet, which wouldn’t have been possible if we’d made another album straight after Thin Walls. With Warhaus we jammed a lot on stage and allowed some jazz and pop influences to seep in, which is something I think we might also do with Balthazar now. I think the same goes for Jinte with J Bernardt. You interpret your songs in a different way, and it’s just like an extra thing you can bring to the table.

Patricia has left, and Tijs has joined. What has this done to the band dynamic?
Jinte: The thing is, it really depends because we still have to start touring. For the creative process it’s just Maarten and I. Patricia left just after the last album, but it was news which we only came out with this year. It was already a long-term decision for her, because after all these years with Balthazar she was eager to undertake other project. We didn’t want to directly replace her either, because she’s irreplaceable. Instead, we decided to ask our old friend Tijd to join is. He can play so many instruments, so it felt good to have him on board. When we rehearse we’ll have to reinvent our set from the ground up, because that’s what adding Tijs is: a reinvention, not a replacement. It didn’t change anything while creating Fever, but it’ll change a lot about the live show. We’re excited to see how it’s going to turn out!

What was it about Fever as a track which made you feel that it was the basis for the entire album?
Jinte: During the entire album process we were very open minded. We didn’t have much of a masterplan in knowing what kind of record we wanted to make; all we knew was that we wanted a reaction towards our older music, lighter and more extroverted. We have so many songs, but when we wrote Fever we felt it. We felt that we’d finished a key track. It feels like a combination of the vibe across the whole album, that collective feeling. The bassline on Fever is something we wanted to do a lot with, and there’s a lot of influence from African percussion music. The vibe on Fever and all these little details combined made us realise what kind of direction we wanted to go for on the rest of the album. There were songs we’d already made, but it wasn’t until Fever that we felt like we had the right puzzle pieces for a whole album. It wasn’t a struggle to be more playful and experimental, but sometimes you just need that moment of catharsis.

A six-minute long lead single is an interesting choice to make. Were you not at all apprehensive about doing something like that?
Jinte: We had a lot of different versions of this song at first. There were so many different arrangements and styles we’d created that we even had one which was twenty minutes long. Eventually we cut it down to six minutes, but that’s because we were too drunk to complete a twenty minute version. We were happy with it!

The rest of the album is great, it sounds like quintessential Balthazar, yet it’s also fresh. At what point during the process did you feel like it was complete?
Jinte: Well, we started working on it around a year ago and we had no clue what to do. We just knew that we had to do it! We wrote so much and no masterplan, apart from when the opening track – Fever – gave us this direction. It combined the pop sensibilities of old Balthazar with all these new ones. All the new songs we’d written we rearranged according to Fever’s own playfulness.

The Belgian musical climate is really flourishing right now, and as a band you’ve been a big part of it for longer than most. Do you find it a struggle to remain relevant not only after a hiatus, but also in a world where everything is disposable?
Maarten: I think we’ve always tried to do something fresh but at the same time add a timeless element to it. A timeless quality. You never know if you’ll succeed, but we try not to run after hypes and stuff like that. It’s true that there’s an interesting scene in Belgium now and I think it has to do with this certain national mentality which we have. We’re not a very sexy or chauvinistic country, and we’re not very proud of us being Belgian, but the cool thing is that we’re so open minded to other cultures. We’re opportunistic, and we take cues from everywhere. When we started as a band we did everything we could to not sound Belgian, but now we embrace it. We worked with a Belgian producer who is also a close friend of ours, and this Belgianness makes us stand out from British bands and it’s what gives us an identity. We’ve learnt to enjoy it.

2019 is going to be a big year for Balthazar, and you’re kicking it off with a huge tour. What can we expect?
Maarten: We kind of know the drill by now, but the venues keep getting bigger and the cool thing is that this record was meant to be played live. We recorded it very live, and the shows will be far more celebrational than they used to be. 2019 is going to be the year where we bring our music to the people in quite an intense way. We’re also going to make some new music behind the scenes, but for what that is we don’t know yet. Fever comes out this week Friday, 25 January, via PIAS.