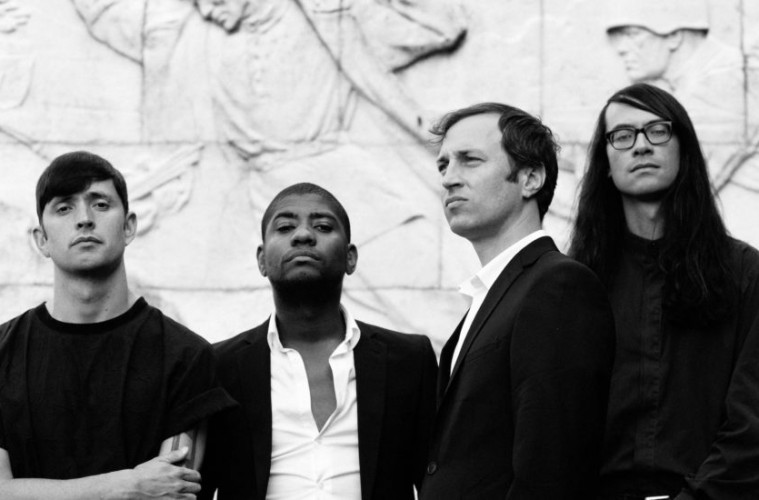 LIVE: ALGIERS ARE THE BAND WE NEED, NOT THE ONE WE DESERVE (✩✩✩✩✩)

Algiers are one of the most exciting bands of our time. In a world where our political climate has become so absurd that many don’t even know how to react, they’re one of the few who are tackling the problems head-on. They give voice to those who feel repressed and unrepresented, delivering their message with barely contained anger and music that reflects that discontentment. On their latest album, 2017’s The Underside of Power their sound massively intensified, creating one of the best and most original albums of the year that drew influences everywhere from gospel to industrial genres. This is a band unwilling to follow in the footsteps of others, they realise that if they want to make an impact, they need to forge their own path. There was no support at Merleyn in Nijmegen on the 21st of February. Just Algiers making their way to the dimly lit stage as the crowd were unsure whether or not the gig had even begun. The devastatingly loud intro of Cleveland answered that question. The bandana sporting, denim-clad Ryan Mahan accentuated each hit of the keys on his sequencer with moves that were simultaneously smooth and intense. As Bob Odenkirk lookalike Lee Tesche struck his fragmented guitar with a drumstick to create a rhythmic accompaniment to Matt Tong’s steady drumming, frontman Franklin James Fisher belted out the opening line.

“I never saw your face but I can tell you’re there, and waiting at the right hand“. His voice was just as impressive live as on the recording, holding nothing back as his urgent words shook the venue. The volume was loud, the atmosphere was intense and the crowd were stunned. To go from a few drinks at the bar to this level of intensity with no support, no warning was a shock to the system, which is what this band are. They create a maximalism that punctuates their call to arms which is massive on the recording, but somehow even bigger on stage. There was no break in pace as Cry Of The Martyrs and Walk Like A Panther followed swiftly after one another. The sight of each band member switching between instruments, loop pedals and positions was enough to captivate you as you tried to pull apart the sounds from the activities that were going on. Tesche, in particular, seems to have no regard for convention. Watching him struggle to unfurl a chain from fragmented guitar, its drumsticks where the strings are meant to be revealing nothing of its purpose, as he looked annoyed at the sound that may or may not have been being made was a sight to behold. What the purpose of the chain was, I have no idea, as before he seemed to do what he needed to do, he had to grab a violin bow to scrape it across the strings of his actual guitar. Doing all of this while dressed as a country music aficionado, with bolo tie around his neck just added to the surrealness of everything.

Ryan Mahan’s effortless delivery of the many rambling basslines were the only times he seemed to be relatively still on stage, an explosion of moves punctuating each and every sound he created. With the cacophony of sound around him, drummer Matt Tong, also of Bloc Party, had a relatively constrained task holding the rhythm section together. Despite the fascinating activities of every member on the dimly lit stage, it was Fisher that inevitably stole the show. It’s his powerful and tuneful voice that cuts through the harshness of the rest of the sound. When the band drop the intensity for a brief respite with Mmm Rieux you realise that there’s no excessive processing on the recordings, this guy is the real deal. In the rare moments where he was doing little enough to be able to show off some moves, his foot gliding moves were impressive, though at one point wild enough that he managed to knock the microphone out of its stand. It wasn’t a problem though, he just grabbed his other one. This is a band who come prepared.

Every song sounded so much more abrasive than its recorded counterpart, which made set closer The Underside of Power with its singalong chorus sound so out of place in comparison to the rest of the set. Even that has its harsh breakdown in the middle eight which sounded more intense live. It’s become their ‘hit’, likely with many of the audience knowing little of their other material. Though it’s a great song, it doesn’t prepare you for the intensity of the rest of the album. If I were to suggest an introduction to what this band is about, what they’re like and why they’re so vital, I’d suggest going to see them live.