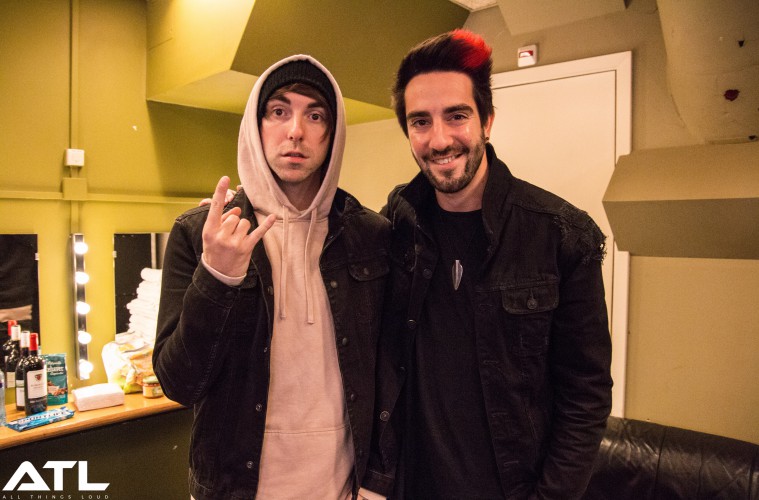 All Time Low: “It just felt like the right time to make that change”

Cast your mind back to September 2007, when Baltimore quartet All Time Low made their big breakthrough thanks to sophomore studio album So Wrong, It’s Right. Back then, Alex Gaskarth and co. were a group of newbie lads whose mark was far from being made in an alternative scene which had picked itself up and partially decamped into the mainstream consciousness. Breaking through was never easy for Gaskarth and his band, but through their grit, determination and Blink 182-lite dick jokes they’ve managed to sell out arena’s across the world in support of a constantly evolving back catalogue which gave a whole new meaning to the term ‘pop-punk’. This week (2 June), the quartet will put out their seventh LP, the status re-affirming Last Young Renegade. It follows 2015’s lacklustre Future Hearts, and is their first album since signing to Fueled by Ramen. Frontman Alex Gaskarth and guitarist Jack Barakat sat down with us for a chat about the record, which they’ll be touring across the European mainland this autumn. Before we discuss the new record, I want to talk about the transitional period between ending the Future Hearts campaign and kicking off this one. What went down?
Alex: Towards the end of the Future Hearts record cycle we secretly signed a deal with Fueled by Ramen. We were still finishing up some of our contractual obligations to Hopeless Records and rounding up the latter half of that deal.

Jack: And releasing a DVD!

Alex: Yeah, that too. It was a really interesting place to be, because we were finishing one record and putting out some stuff on a label which we weren’t actually signed to anymore by that point. It was great, because the transition was amicable and Hopeless were, and still are, a partner throughout all of it. Fueled by Ramen did a really good job at not pushing us to record an album time-wise, they were great and really on board with what we were doing. We were secretly working on songs while also finishing up the last album cycle, and that’s what kicked off what ended becoming this new record.

So how did the signing to Fueled by Ramen come about?
Alex: It’s the fact that Fueled are one of the labels that we’ve loved forever. They were the first label that we showcased for ever, like thirteen years ago. It didn’t work out back then.

Jack: Yeah. We stayed in contact with them and knew a few of the people who work there. They used to do our merchandising too for a year or so.

Alex: It was a company we’d always loved, so it felt like a good time to try something new. We ended up working that deal out, and it just felt like the right time to make that change.

The record itself is a musical step in a new direction. Did you at any point see this as a logical next step to take, or something that you wanted to explore further down the line?
Alex: I don’t think it was that specific to be honest. We started writing songs and ended up writing a lot of music for this record, and it started taking shape towards the end of the process. That’s when we knew it was going to take on this new aesthetic and employ this new feel. A big part of it was that we’d, at the time, been reflecting on a lot of our older music. At the same time, a few of my favourite artists passed away, Bowie and Prince for example. I ended up going and listening to a lot of their back catalogue and remembering what made them so iconic and great. I took part of that away, and we talked about how we could pepper the record with some older, more vintage sounds.

Jack: It wasn’t until afterwards that the songs we’d written took on more of an electronic feel. A lot of the songs were written in a certain way and they all took on their own identity.

Alex: At the end we just pulled it all together. One of the biggest things was that we had a few songs which became real cornerstones of the album, and they basically set the tone for the rest of the record. After that we wrote everything else in such a way that it could create this new, very visual album.

Did the songwriting process differ greatly from, say, Future Hearts or any previous record?
Alex: It didn’t, to be honest. We wrote in the same way as we always write, but this time round we wanted to try out new things. The biggest thing at this point in our band is that we’ve been doing it for fourteen years, and so we had to ask ourselves how we would keep things fresh without completely diverging from what we consistently do. A big part of it was thinking about our live show and how that’s getting much bigger, and figuring out what kinds of songs we were really lacking in the sets. We all felt that there weren’t enough moodier songs and that we could create some more ambience in the set. A real vibe might have been missing from our catalogue. All Time Low has always been a high-energy type of rock band, and that’s great. We love doing that, but there’s another side to us which we wanted to explore.

Jack: We’ve kind of explored it in the past on maybe one or two songs per album, but that was it.

Jack: Yeah! For example an older song like No Idea, or even Too Much.

Alex: We’d always wanted to go there, but we never took the time to really explore it.

The lyrical content on the album centres on certain characters. Are these fictional or is there a personal link in and amongst it all?
Alex: I think what ended up happening is that the idea of this character, the Last Young Renegade, kind of became an embodiment or device for me to write very personally or about things close to me that I wouldn’t necessarily feel comfortable writing about openly, if that makes sense? By giving these issues and stories a character to base them around, it let me write a lot more freely. That device became really cool as a way to approach writing our songs.

Jack: Which is one story the whole way through!

Alex: Yeah. I don’t think it’s that elaborate, but there definitely is a thread that connects all the songs, as well as a noticeable story arc if you listen to the album from front to back. It’s about this character who starts on top, then falls and has to come back and pull himself back up.

So how will you go about translating these songs into a live setting, particularly alongside your high-energy previous work?
Alex: I think one of the great things is that none of the stuff we’ve put out before is going anywhere, so it’s how we fit the new stuff in.

Jack: It’s definitely made it tricky for us to sequence the setlist, and it’s also difficult for the production. The vibe and the lights, for example. We have a really close relationship with Jeff, who’s done our lights for years, and he’s very much on the same page about how we want the songs to feel live.

Alex: Creating these ebbs and flows is cool. We give people the high-energy songs that they’re used to, and then we juxtapose that with the newer, more vibe-y stuff. For people that haven’t heard the record, I’d still say that there are plenty of great energetic moments.

I also just want to focus on the art direction. It’s very visual from what I can gather, so how do you plan on further conceptualizing that with, for example, videos?
Alex: That’s just it! There’s a guy called Sam Spratt who did the album artwork, and he’s incredible. After one long phone conversation about the themes of the record he took it and delivered an absolutely insane sketch within a couple of hours. It was so close to what the final product was.

Jack: It was so crazy! If you go to his Twitter you’ll see his original sketch and see how close it was to the final artwork. There were only a few minor tweaks.

Alex: It’s really impressive, so he really brought that and the character to life. From there, the music videos are all interconnected and very much story-driven. It’s been a really fun thing to do, and it’s something we’ve never really done before. There’s more to come!

Jack: They also have a very visual vibe overall, a particular style which we chose on purpose because we love it.

Alex: This record feels really visual to me, and I feel like it takes to me a place where I see very specific things. We’ve been trying to capture that with all of the videos. What can we expect from you for the rest of 2017 then?
Alex: A lot of touring! I think we’re going to be on the road quite a bit and getting this record out.

What you’ve done now for a couple of cycles is tour before the album itself actually comes out, and then not do so after you’ve released it.
Alex: You’re right, and I really regret it.

Jack: On this current tour [April 2017] the setlist is very much centred on songs from Future Hearts simply for that reason. There are songs like Missing You which we never got to play here for headline shows.

Alex: We’re definitely putting a lot more emphasis on the last record this time round. I definitely think we’re going to get this record out and then do a proper tour later this year.

Tonight’s show is relatively small (the Melkweg in Amsterdam), but from what I’ve heard thus far this album is definitely made for bigger stages. Is that something you consciously went for?
Alex: Yeah! I think part of it was a product of the fact that we started playing our biggest shows ever last year. We were doing arenas and grander set-ups, and that definitely became something that we thought about when working on Last Young Renegade. We asked ourselves how we’d go about making songs which translate to these much bigger venues.

Thanks for your time!
Alex: No worries, thanks!

Last Young Renegade comes out on 2 June via Fueled by Ramen, and All Time Low will appear at Amsterdam’s AFAS Live on Friday, 13 October. Get your tickets here.