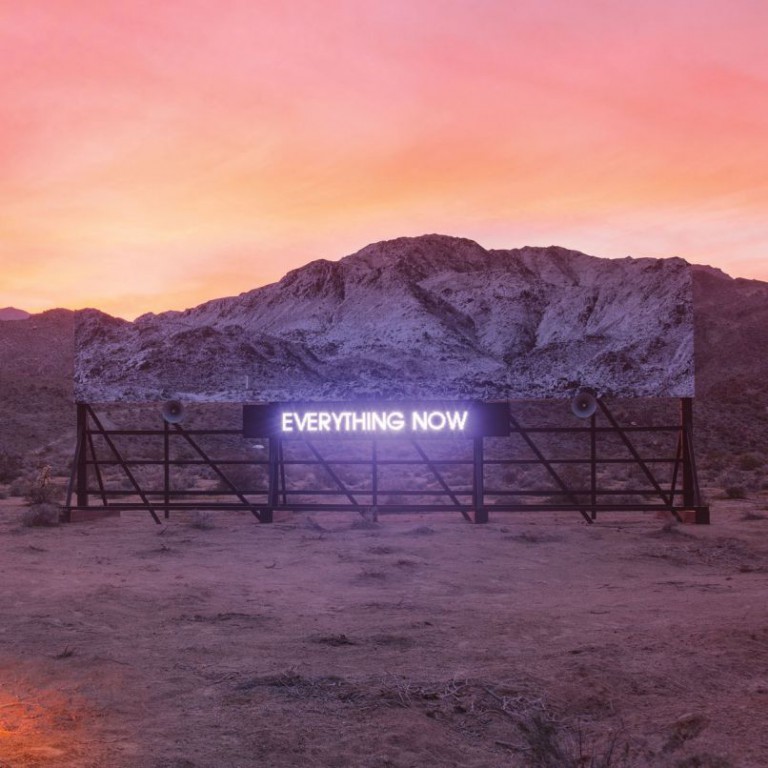 Back in 2010, when Arcade Fire put out career-defining opus The Suburbs, frontwoman Regine Chassagne mused about escaping the Sprawl on the hope-filled Sprawl II (Mountains Beyond Mountains). The mountains she sang of, as well as the suburbs the whole band reminisced about, seemed to be a metaphor for the band’s desires to move beyond where they were and reach new heights. It saw them power on forward into the double-disc Reflektor, their first (more experimental) foray into a new sonic territory. Although groundbreaking at the time, Reflektor in hindsight now makes a whole lot more sense put up against Win Butler and co.’s brand new studio album Everything Now, released today. The record presents the sound of a band who are finally in a position they’ve always wanted to be in, the mid-point between classic Arcade Fire and tentative experimentalism. The album opens on what is undoubtedly the song of the summer, title track Everything Now. Its ABBA-meets-EastEnders theme tune has been a staple across festival stages the world over this year, whether it be your late night DJ set or one of Arcade Fire’s many show-stopping European performances, the last of which came to a close last week. It puts the Toronto band on a poppier pedestal which sounds like quintessential Arcade Fire just as much as sounds like a Top 40 banger. “Pledge allegiance to everything, now” sings Butler early on, instantly signifying the conceptual side of the record which plays with the idea of a capitalist organization (Everything Now Co.) taking charge of the band and all their activities. This conceptuality has spread itself across the whole board of Arcade Fire’s activities, from their synchronized EN outfits onstage to Reddit AMAs with interns at Everything Now Co. The phrase “Everything Now” is one which the band make great use of throughout the album, just as much as they do with the term “Infinite Content”, forming the centrepiece of the record in the process by means of two identically titled tracks which explore the outer reaches of punk (the former) and folk (the latter). They split the record into two coherent sections, the first filled with in-your-face musical explorations and the second more brooding and sonically sensual. The musically explorative side of the record (its first half) features a majority of the previously released singles, including early album highlight Creature Comfort. Its sickly sweet melody and buzzsaw synths combine to accompany lyrics which speak of body image and suicidal thoughts, making for a bittersweet end result which sounds as hopeful as it does soul-crushing. It’s a prime example of exactly what Arcade Fire do best: thought-provoking and oft challenging lyrics paired with instrumentals which challenge each individual member’s own musical abilities as well as your pre-conceived ideas of what this band are all about. Long gone are the rowdy bunch of musicians who exploded onto the scene with the raw and emotive Funeral, having been replaced by a pristine bunch of artists whose own capabilities seem to range further and wider as time goes by. The disco-tinged Signs of Life kicks off with sirens, climaxing with horns and a perfect collection of harmonies courtesy of Chassagne and Butler. It further makes way for the gritty Peter Pan, which sounds like a sonic companion to the Haitian grooves on Reflektor outcast Flashbulb Eyes. The swaggering Chemistry brings a close to the album’s first half by way of reggae grooves and a subtle reference to The Suburbs, with Butler musing: “My heart’s a city, you’re out to destroy”. It’s an example of the band looking back on their past, however subtle it may seem. The second half of the record presents the listener with the Chassagne-helmed Electric Blue, a track which sounds out of place by itself but fits in better within the context of Everything Now’s electro-meets-indie folk rhythms. It may be the weakest moment on Everything Now, but the bar has still been set relatively high for what the rest of the LP has to offer. Amongst its offering are the Elvis-hinting Good God Damn, which harks back to the band’s religious outings on Neon Bible (paired with groove-laden bass), as well as album highlight Put Your Money on Me. It builds up and pulsates slowly but surely before reaching a momentous climax worthy of stadium-ready anthemia. There aren’t many moments on the album which come close to the emotion that Butler, Chassagne and the rest of the band (Will Butler, Jeremy Gara, Richard Reed Parry and Tim Kingsbury) evoke on Put Your Money On Me, even if the title track does come close by means of its relentless energy. We Don’t Deserve Love slows the pace down once again by means of slowly bubbling up synths and percussive elements, making way for an extended version of album opener Everything_Now (Continued). The record reaches its curtain call with utmost serenity, before dying down and subsequently looping back straight into the beginning of the whole record. This eternal loop is another attentive detail which the band have placed on the album, meaning that the record doesn’t even have to end if you don’t want it to. Everything Now Co. will certainly be happy. Hints of the band’s past are littered throughout Everything Now, even if the album is as far removed on a sonic front from their older output as can be. The album doesn’t have its own equivalent of Wake Up or Intervention, rather placing the focus on the whole conceptual side of things. That the album doesn’t have an outright anthem (save for the monstrous title track) is not an issue, though, because Arcade Fire ultimately sound at ease on Everything Now, almost as though they’ve finally found the place they want to be in. From the outside it may sound like the kind of record which takes some time to grow on the listener (as fans have previously expressed), but on the inside it’s instantly evident that Everything Now is Arcade Fire’s mission statement. It stands separate from the career-defining likes of Funeral and The Suburbs, rather forming its own meticulously crafted entity which sounds like a band in their prime. Whatever the band get up to in future years is anyone’s guess, but it wouldn’t be all too surprising if they sonically transformed yet again to ring in another new chapter and musical revolution. Arcade Fire are the past, present and future of this dwindling indie scene, and on Everything Now they’ve proven that they’re here to stay for as long as they so please.

Everything Now is out now, and you can stream it below.