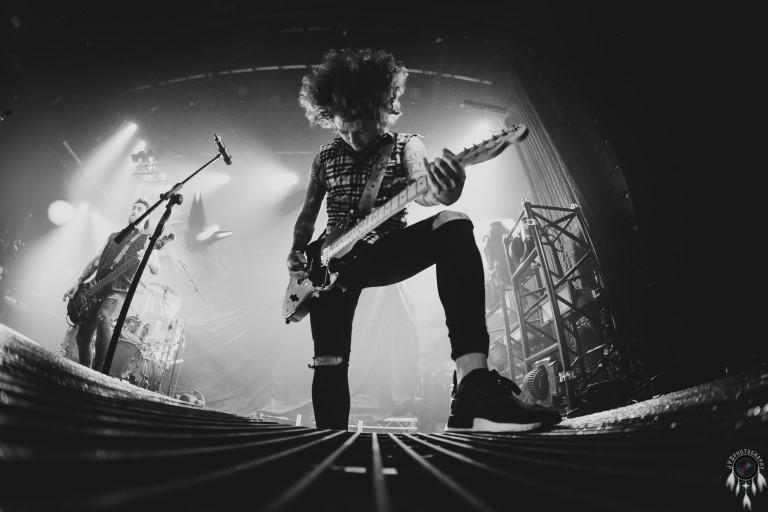 Burning Down the House With Asking Alexandria’s Ben Bruce

Musical change can be tough, not just for the baying fan but also for the artist themselves. Over the years, Asking Alexandria have gone through many sonic phases, never sitting still long enough to manifest themselves within one scene or sound. Today, the Danny Worsnop-fronted rockers released sixth studio album Like a House on Fire, and Jack Parker called up guitarist Ben Bruce to discuss the stories behind it, coping with criticism and how the music industry can move forward in times of trouble.

Hey Ben. Congratulations on the new album. Tell me a bit about its creation process.
Like A House on Fire took a few years to create! People think that you go in and shit out a record, but it takes hard work, dedication and effort. We had a lot of fun with this album. Instead of sitting in the studio for a few months we’d go in, write music and leave for tour. We’d bottle up that energy from the live shows and bring it to the studios.

So would you say this was an album made for the stage?
Oh, 100%. We definitely had the live setting in mind.

This is the second album you’ve released since Danny (Worsnop, vocals) rejoined the band, and sonically it is once again a solid progression. Do you feel like this album served as something of a creative reboot? Especially considering the expectations when Danny first returned.
Yeah, but I just think that we hit that reset button with every album we made. I think the beautiful thing about music is that albums can grow and change with you as you grow older. All of our albums, from Stand Up & Scream until now, will always be there and serve different purposes for people in their lives. We don’t want to write a record which sounds like something we’ve done before, as each record is a new album at a new time in our lives. It affects people differently, which people sometimes forget. It’s important to change and hit that reset button, and it’s also important to provide fans and yourself as an artist with new experiences and feelings.

Do you feel like Danny’s time out of the band has also helped shape the way the new music sounds?
100%, yeah. I think it can be said for all of us that his departure was a very sobering moment. We all took that time apart to grow and learn about ourselves, and when he rejoined we learnt about each other and realised what was important to us as friends, people and artists and harnessed it. Danny’s return didn’t change the band, but it did lead us all to change individually.

Grace Gundy also joined on one of the tracks. How did that collaboration come about?
That’s an interesting story. My wife was watching a TV show called Love Island, and when I say my wife I mean that I was watching with her. I was sucked into it, but this one voice kept popping up in the background and I thought it sounded unreal. I Shazam-ed it and saw it was Grace Gundy, so I reached out to her and told her that I’d love to work with her. It turned out she was a fan of Asking Alexandria, so I sent her the song I thought she’d be perfect on and it was amazing.

As with many heavier bands, change is frowned upon by diehard fans. This album, though, feels like a logical progression. How – as a band – have you learnt to cope with the demands of fans over the years?
That’s a really interesting question. Honestly, I don’t know if there is a coping mechanism, and that’s why we see so many musicians literally killing themselves. People are so brutal, and they don’t understand where art comes from. People who put artists down don’t get what it means to be one, which is fine because they aren’t artists. As far as me personally coping with it, I just try to drown it away. I have my good days, and I also have my bad days; sometimes it gets to me and I feel down and hurt. It’s easy to say that I could just ignore it, but sometimes it does hurt. For every person out there talking shit – not like the people who say older albums sound better, that’s totally fine – there’s one hundred people enjoying what you’re doing. When you start writing, you hope that someone – anyone – will hear your song and take something away from it. It will mean something to them.

So do you think that social media has helped harness this brutality over the years?
100%. I don’t think that people disliking music and being shit talkers is new, but social media has given people the platform to be dickheads, and I think that it sucks. The weird thing is that people think they can say whatever they want. You wouldn’t see an overweight person on the street, cross the road and go out of your way to tell them they’re fat – it’s wrong. On the internet, those rules are out of the window and people think they can be a cunt.

You live in California. Do you feel like – as a British musician – spending so much time on the West Coast has impacted the band and the music much? This album has an American feel more than any of the others.
Yeah. I’m not too sure what American music sounds like compared to English music, but we’re just affected by our daily lives. Where we live definitely affects how we write though, of course.

It almost feels as though you’re bigger than the US than the UK. Why do you think Asking Alexandria appeals so well to US audiences versus other territories?
I’m not too sure, other than that we tour here a lot and that we have had a lot of radio success in the US. We do arenas here, and we get to put much more time into it over here. We’d love to put the same time and effort in everywhere, but financially that just doesn’t work. As far as the UK and Europe go, we’ve seen a steady growth and progression. I feel like when we go back to play in the UK or Europe that it’s a little more special, as we don’t get to go there as often.

You’re also starring in Paradise City, the American Satan spin-off. Do you feel like this has opened the door for you to do more acting, perhaps even away from music-centric TV?
You know what? It’s weird. Acting was never something I ever considered doing; it was never an interest of mine. When I got offered American Satan I took it because I like to push myself to try new things and test my boundaries and capabilities. It was an insane experience! I didn’t know if I was going to like it or not, but I fell in love with the whole process. Getting to do Paradise City was great for me. It was great to exercise that newfound love for something just as creative as music.

A while back you decided not to postpone the release of Like a House on Fire, unlike other artists who did move release dates due to the ongoing COVID-19 pandemic. This pandemic has hit the music industry hard, but how do you see it moving forward as and when it can? And what can we learn from this?
It’s a weird time and place which we’re in right now. I know a lot of people have been taking live music for granted, because it’s so frequent. That’s no one’s fault, of course, because even I took touring for granted. Like, “Oh, we’re gonna tour again”. People are the same, they’ll be like, “Ah, this band will come back soon, I can skip this show”. If there’s anything which we can take away from this then it’s how important live music is. A life without live music is nowhere near as much fun or enjoyable. It’s a big thing for us all, so when it comes people will be less inclined to take it for granted.

Do you think it’s perhaps exposed areas of the industry which are fundamentally flawed and needed fixing long ago? Or highlighted progress areas?
I think everyone knows that streaming services do not pay artists their fair share, but this has probably highlighted it for so many more people. Touring is the main income for 90% of musicians. I’m not talking your Beyonce’s or A-List celebrities, because for most artists and musicians it’s 90% of their income. The fact that it’s gone has highlighted the fact that they’re being compensated unfairly for their art. That should change, and I hope this is the catalyst. Like a House on Fire is out now.