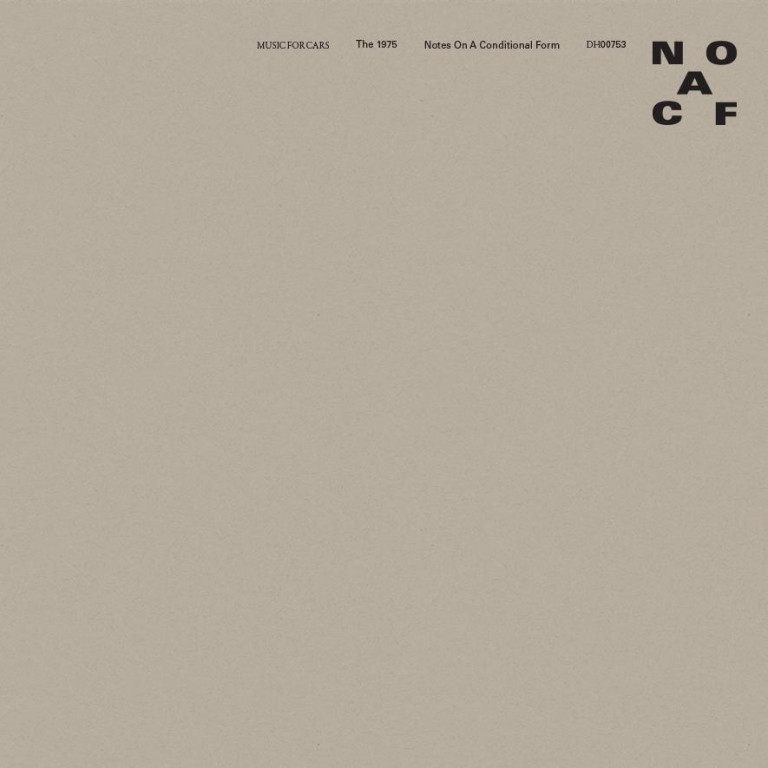 The 1975’s Notes on a Conditional Form: A Dive Too Deep

When you reach the level of a band like The 1975, it comes with an abundance of creative freedom. With three blockbuster studio albums to their name, Matty Healy and co. have earned the right to let go just that little bit more and indulge in their own sonic desires. Notes on a Conditional Form, the band’s fourth studio album, is exactly that kind of record, one where rules are thrown out of the window. It’s a 22-track journey through the minds of one of the world’s most in-demand bands, an opportunity for them to explore everything they’ve ever wanted to explore. Fans will lap it up and praise it to the gods, but is it good?

In short, it’s average at best. The 1975 have always been the kind to embrace unconventional songwriting approaches, but for the first time ever it feels more forced than natural. For more than 80 minutes, it sounds like they’re throwing everything they have at the wall and seeing what sticks. And then throwing again, and again, and again until everything they have sticks somehow. That’s not to say that it’s a terrible album, though. It’s just nowhere near as strong as the three records which came before it. The frantic People is an early highlight, its wall of sound a post-hardcore experiment worlds away from what you’d normally expect from the band. If You’re Too Shy (Then Let Me Know) has all the hallmarks of a hit single, Healy’s sickly sweet voice echoing alongside four-to-the-floor indie rhythms and brief stabs of sax. The wannabe-teen-movie-soundtrack of Me & You Together Song bridges the gap between early 2000s grunge pop and modern day indie by means of a catchier than catchy chorus, something Healy has always been very good at achieving.

But it’s the great moments which are just so sparse, sandwiched in between one too many leftfield offshoots (Bagsy Not in Net, Having No Head, The End (Music For Cars) and Streaming to name but four). The kinds of moments which Notes could have done without; flourishes of strings, synths and warbled vocals that provide plenty, but have no substance to them. Elsewhere there are moments with so much potential that end up never being realised, such as Then Because She Goes, a lilting alt rock cut which ends far too soon as though it was an unfinished demo, as well as the lacklustre Roadkill. Tonight (I Wish I Was Your Boy) could have been a smash hit, but instead it’s been watered down to something too lo-fi to have the right impact. Guest vocals from the likes of Phoebe Bridgers (on four tracks), Cutty Ranks (on the upbeat Shiny Collarbone) and FKA Twigs provide some variety to the album, adding enough to the music to have an impact but never stealing the limelight. Bridgers’ appearance on Jesus Christ 2005 God Bless America is one of the stronger moments on the album, as well as the inclusion of a gospel choir also on the redeeming Nothing Revealed/Everything Denied.

Notes on a Conditional Form was never meant to be a political album, even if opener The 1975 features a lengthy and deep speech from activist Greta Thunberg. It’s one of the only moments on Notes where Healy and co. look outwards, highlighting the bleak state of the world. But the state of the world is not the main concern on Notes, as that’s reserved for a more inward approach. The moments of fragility throughout the record, of which there are many, provide glimpses into Healy’s psyche. He’s never been afraid to speak his mind, and although he does ponder a lot on Notes it’s become clearer that he’s more open and honest than ever. Earlier singles Frail State of Mind and The Birthday Party showcase this, with the piano-led Don’t Worry – a track penned and co-sung by Tim Healy – the most wholesome example of it. Healy’s father wrote this song when Matty was a child, and its simplistic lyrics (cloaked in autotune) reflect the carefree nature of childhood and pre-adolescence. Album finale Guys serves as a sweet love letter from Healy to the rest of the band, but musically it falls far below the mark.

The 1975 have now reached a level in their careers that they can get away with putting out a 22-track album. But that’s not to say they should. Without discrediting Healy’s personal, introverted lyrics, Notes on a Conditional Form is a dive too deep for a band who have never been afraid to take the plunge. To their credit, they have never made the same album twice, but for all of Notes’ good moments, there are just far too many misguided or directionless songs which don’t contribute an awful lot. Where 2016’s I Like It When You Sleep For You Are So Beautiful Yet So Unaware Of It and 2018’s A Brief Inquiry Into Online Relationships succeeded, Notes on a Conditional Form unfortunately falters. Notes on a Conditional Form is out this Friday (22 May) via Dirty Hit.